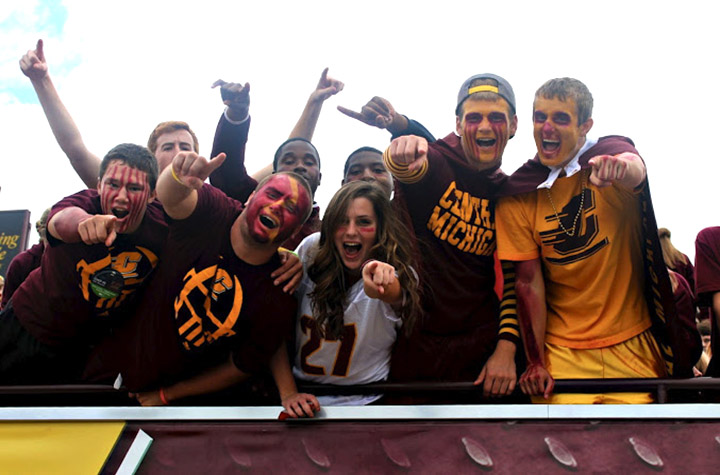 Spring is in the air. Well, not exactly but it is quickly approaching on the calendar. Spring brings with it a lot of great things. There is Opening Day in baseball, the Stanley Cup and the NBA Playoffs.

Perhaps, one of the most important parts of spring, though, is the arrival of college football.

Spring practices are right around the corner here at Central Michigan University. The 2014 season will be coach Dan Enos’ fifth season at Central since taking over for Butch Jones. It’s no secret to anyone who’s remotely paid attention to the Chippewas the past few years, but the level of success under Jones hasn’t been maintained.

Still, that’s not a knack on Enos. He brought a new style with him, and the Mid-American Conference in general has improved the past four years. This is year five though and the first complete cycle of Enos recruits will be cycled through the depth chart (there are five-year seniors that are eligible to play thanks to redshirting).

There is reason for optimism in Mount Pleasant for the coming season. In Enos’s first two seasons as the ball coach, he waded the waters of atrocious football. The results were abysmal, and fan interest dwindled down.

Then in 2012 the page turned. The team made a bowl game going 6-6 (albeit it required a MAC team to receive a bid to the now defunct BCS series of bowl games for this to happen), and in 2013 the results were repeated just without a bowl invitation.

On paper the quality of the Central hasn’t varied too much on the recruiting front. The team continues to finish in the middle of the pack in terms of MAC recruiting, according to Rivals.com.

Still, the product on the field seems to be turning a new leaf. The crowning moment in the latest round of success for Chippewas’ football is the selection of offensive tackle Eric Fisher as the No. 1 pick in the 2013 NFL Draft.

So what can be expected out of the 2014 Chippewas?

Well, first of all the schedule suggests at least another 6-6 season, with a strong chance the team can finish above .500. For only the second time in the past seven years Central Michigan isn’t being fed to Michigan or Michigan State to start the season. Instead, the out of conference schedule is kind.

The team also opens the schedule against FCS foe Chattanooga, in the only Thursday night game of the season. That’s right! There is only one Thursday game on the schedule for 2014. There will be no metaphorical tumbleweed blowing through the stands like a ghost town during a Black Friday game this year.

The Chippewas also managed to draw a fair road schedule that doesn’t include a trip to 2013 MAC champions Bowling Green.

It’s fair for an optimist to fathom upwards of eight wins for the 2014 Chippewas. The MAC is going through a brief identity change with the departure of NIU star Jordan Lynch, so the conference is open for the taking.

Central will not win the conference, but they will find themselves in a bowl game at the end of 2014.