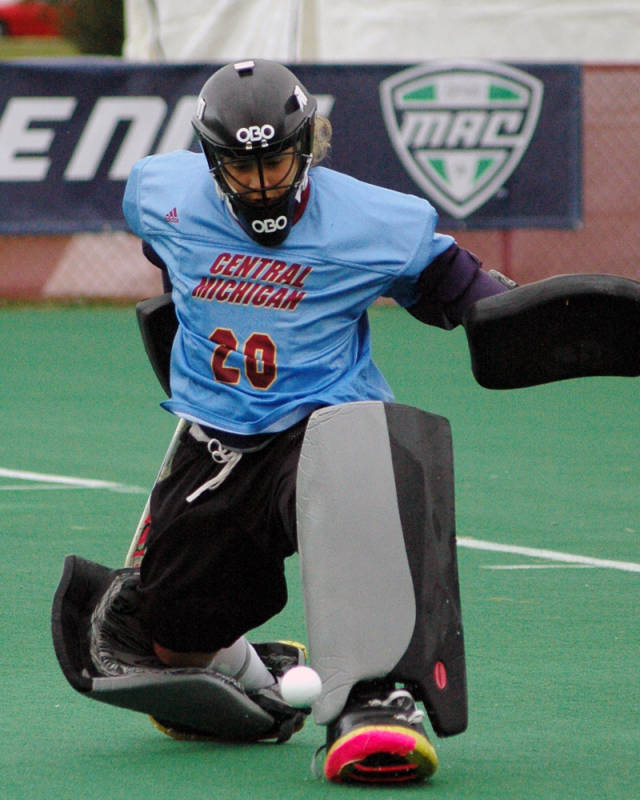 When you’re not the favorite and it’s considered a “building year”, any tournament experience can be considered a success.

The Central Michigan field Hockey team played host to the 2010 Mid-American Conference field hockey tournament and was able to pick up a two-to-one win over Missouri State in a quarterfinal game but lost against top-seeded Kent State four-to-two the next day in a semifinal game.

“We’ve got to improve all facets of our game for Kent State,” Coach Christy Freese said following the Missouri State quarterfinal game. “There were three yellow cards assessed today and part of that can be attributed to the physicality of tournament play. But we just need to be a little smarter for Kent State.”

Freese has seen building years eventually turn into championships during her illustrious 25-year career at Central but with just a three-and-seven conference record entering the 2010 MAC Tournament, her team was considered a long shot to win the conference and earn an automatic bid into the NCAA Tournament.

“I felt good with what we were able to do with the young players this year,” said Freese. “From the onset, we wanted to make it to the semifinals and we did, but we have to step up the offense next year because that was lacking in this tournament.”

The Kent State Golden Flashes offense gave Central fits in its semifinal game. The Flashes’ Debbie Bell scored 26 goals this year; the same number of goals Central was able to score on the entire season. But more problematic for the team was the commanding style of play exhibited by Kent State, getting out shot 20-to-two.

“I thought our kids did their best, Kent was the number-one seed,” said Freese. “Bell was difficult to contain. If you try to take her out, there are other players there to pick up the slack.”

If Central was looking for a silver lining in its tournament exit, it would have to look no further than the play of its goaltender Ana Netto. The junior was able to record 13 saves over the two tournament games, something that won’t be forgotten by Freese as the team looks toward the future.

“We really focused on her (Netto) just playing the ball and she had a really good effort. We’ll get another year out of her and we expect her to play a big role next year,” Freese said.

While losing one half of the Sihota sisters in the form of senior Kim Sihota, Central will return a good portion of their team next year including freshman and all-MAC tournament selection Simone Lazar, sophomore and leading scorer Erin Dye, and juniors Brooke Sihota and Paulina Lee.

With the MAC Tournament now over and the younger players having the experience of going against the best the conference has to offer, Central field hockey could be a force to be reckoned with in 2011.