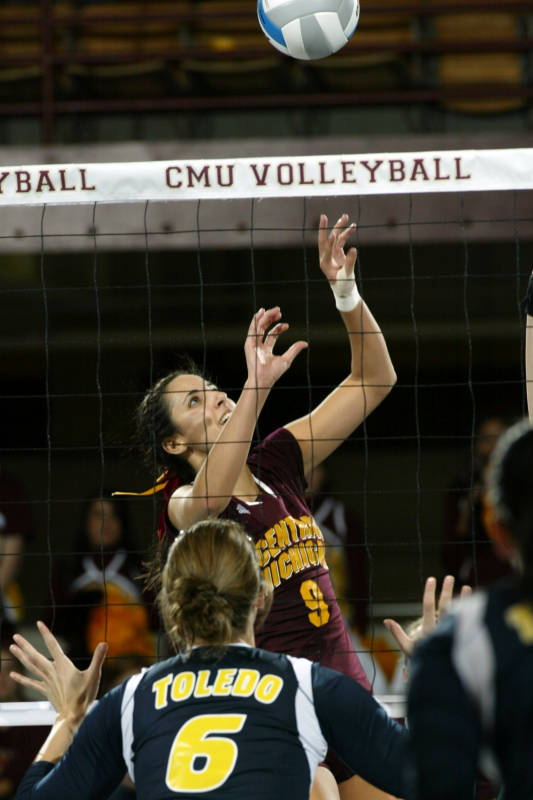 Catherine Ludwig is a key part to the Central Michigan University volleyball squad. She is in her third season with Central and her role has increased with every passing year.

Ludwig is extremely important to the success of the Central offense. After serving as the primary reserve in her sophomore season, Ludwig has not missed a beat in stepping in as a full-time starter.

This season has been full of changes with many ups and downs for the Chippewas. Central still has been very involved in the MAC, staying in the middle of a very competitive conference nearly all season long.

“We just need to stay aggressive and maintain focus without over looking or taking any games off,” Ludwig said.

Ludwig points to her ability to move the ball around as her strongest asset to the team.

“I feel I do my best putting my hitters into good position with the ball,” Ludwig said.

With the MAC tournament approaching, Central will need players like Catherine Ludwig to keep on producing. Central is nearing the end of the regular season and soon everything will be on the line.

“Expectations are very high for the rest of the season,” Ludwig said. “This team can be the best in the conference but we just need to prove it.”

Central has been competitive in conference play throughout the season and has found themselves with many chances to win games in the end. Players and coaches seem to all agree on the fact that the team must cut down their opponents runs in order to achieve their desired success.

The regular season ends with two road games against Western Michigan and Northern Illinois. But on Tuesday Nov. 16 it becomes do or die for Central and the rest of the conference as the MAC Tournament begins, in Toledo, Ohio.

Heading into the final week of the regular season, Central sits at 13-13 overall while 7-7 in conference play. With a chance to finish the season above .500 overall and in the MAC, Central will be firing on all cylinders to get as ready as possible for the conference tournament.