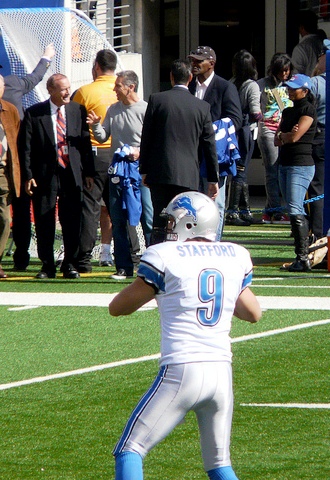 This has sadly become an annual story. Just when the Detroit Lions look like they have turned the corner, they crumble right before our very eyes.

This time, there really isn’t any bright spot.

Matthew Stafford has been lost again to another shoulder injury. Since earning $40 million in guaranteed money, the quarterback has played in 13 games in two years. He has missed a total of 11 games, with eight remaining this season.

No matter where other improvements have come, your team can’t progress any further without your franchise quarterback. Yes, it will be nice to see how Drew Stanton can lead a team over a significant length of time but shouldn’t it tell us something when he has hardly been able to crack the game day roster the past three seasons?

This will only further deteriorate the relationship between Stafford, Calvin Johnson and Brandon Pettigrew – the young nucleus the Lions have been building their passing game around.

It’s times like these Lions fans figuratively pack it in. Yes, they’ll continue to support but the deafening crowd that showed up against the Jets (the loudest I have ever heard Ford Field on television during a Lions game) will be gone. It’s times like these when you start to really respect what guys like Brett Favre have done.

In two years, Stafford will have missed more games than Favre and Peyton Manning combined (barring any injuries to those two in 2010) in their entire careers. Records like these (Favre’s 293 consecutive starts) are based on one-half luck, the other half on toughness.

Sure, Stafford showed us the kind of warrior he is by coming back into the Cleveland game last fall. It was that moment that made him seem different, special even, and what almost gives him a pass with his other recent injuries.

We’ve also seen this before (Charles Rogers, 2003). There are differences between hurt and injured, just as there are differences between lucky and tough. Troy Aikman and Steve Young were able to play on some of the most talented teams of their generations but concussions took their toll. Joe Montana suffered two potentially career-altering injuries (five years apart) to his back.

Perhaps the biggest part of this process is giving Stafford the protection. Martin Mayhew and Tom Lewand have done wonderfully the past two years rebuilding this team off the field. Jim Schwartz has done admirably leading them on the field, even with his very questionable decision-making.

But if the front office can shore up the offensive line even more in the coming off-season and during every Lions’ fan’s favorite mid-season slogan (NFL Draft), hopefully we won’t even have to talk about these situations anymore

Favre has played with some less-than-stellar rosters. But his play (almost) always elevated those teams to play better. Manning’s record setting Colts (seven straight seasons of 12 wins or more) would be absolutely no where without him.

These are guys that make you really appreciate the desire it takes to play this sport on a weekly basis. They endear themselves to their fans. Let’s hope Stafford still has one more chance to show us he can be that guy…please.