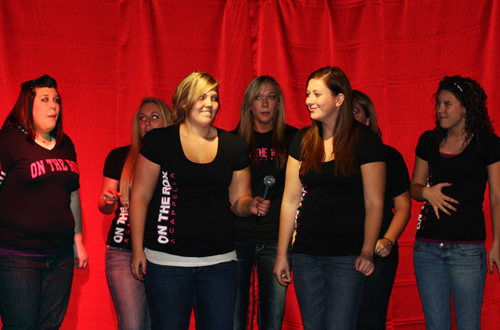 Three designers showcased their work at the first Catwalk For A Cure at CoCo Joe’s Beach House, 4855 E. Blue Grass Road, on Nov. 9.

All the proceeds from the event were donated to the Mount Pleasant chapter of the Red Cross.

The evening started at 7:40 p.m. with the all-girls a capella group, On The Rox, singing a few songs including the popular 1970’s hit “It’s Raining Men” by The Weather Girls.

Good presented a mossy green garden-inspired dress and will also use it for the Threads 2011 fashion show. The other dress she used was from the last Threads fashion show.

Kristine Opaleski, an apparel design freshman and creator of Kristina Opal Designs, pulled her designs for the fashion show from previous shows. She recently competed nationally and took second place at the Family Career and Community Leaders of America for her petite juniors’ line.

Her runway show included some homecoming dresses and cocktail dresses.

The models for the final designer, Kurt Carlson, a Monroe resident and graduate of the International Academy of Technology and Design, were the next to walk the runway.

Carlson’s line was a winter/holiday line with a lot of purples, blacks and metallics, inspired part by the CW Network show, Gossip Girl.

Carlson’s line cost him about $200 dollars to create because his garments were recycled. He produced his line exclusively for the event, finished it in a month and completed all the skirts last week despite a leg injury that put him on crutches. 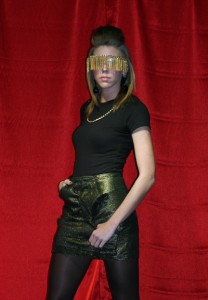 His runway included high-waisted and bubble-shaped skirts, which he paired with embellished T-shirts and leggings to lower the price of the outfits. Carlson recycled fabric and garments, and one of his designs incorporated lace, which was once a decorative curtain, in an effort to go green and save money.

“Being a struggling designer, it’s a great way to go,” Carlson said.

“I just thought it would be really cute for all the girls to have Mary Janes,” Carlson said.

Carlson’s designs were based on a vintage concept that the garments didn’t show off too much. This worked out well for him since he said the models looked classy and put-together.

Carlson gave advice for future designers to stand out.

“Pick your own style and stick to it,” Carlson said.

Carlson owns and operates Kurt Carlson Designs in Monroe where he does alterations and recycles and recreates outfits for customers which results in turning the garments into something completely different.

Broadcasting senior and co-coordinator for the event, Stephanie McClung, said the night was successful and the group reached their fundraising goal with the combination of raffle tickets sold and the 20% of all sales donated by CoCo Joe’s. All will be donated to the American Red Cross Mount Pleasant Chapter.