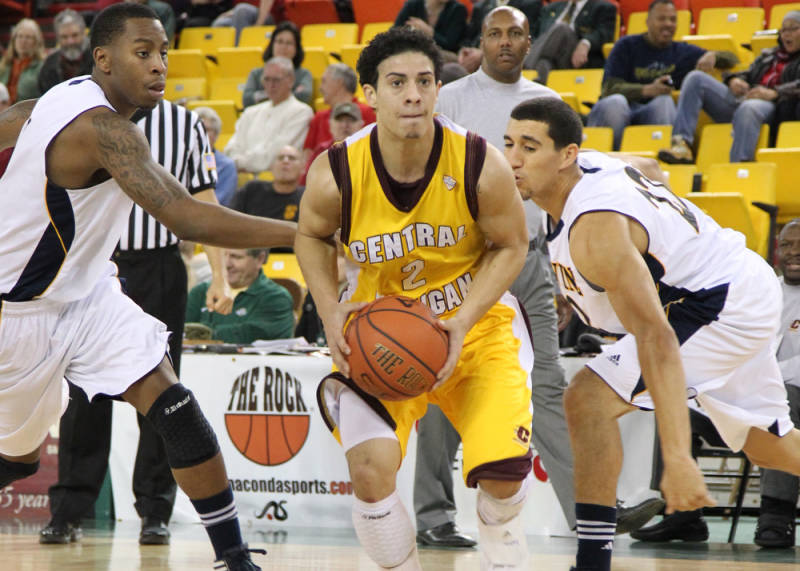 Despite what many fans may believe is a lost season, the Central Michigan University men’s basketball team has found something to be happy about as they look toward rebuilding next season.

After Saturday night’s loss to Akron at home, it has become clear that the team has finally found some scorers to complement the offense of star guard Trey Zeigler. Freshman guard Austin McBroom and sophomore guard Derek Jackson appear ready to take on the added scoring load.

“Yes, I’m ready for it,” Jackson said. “I’m prepared. I think me, A-Mac (McBroom), Trey, Andre (Coimbra) and our whole starting five can be that guy and be productive. We just have to keep being confident, taking shots when we open. Hopefully we’ll get that, that second or third scorer every game.”

Jackson and McBroom showed both confidence and poise in the game against top conference opponent Akron, combining to shoot 12-26 from the field, including 7-15 from behind the arc. The added scoring presence of those two allowed Central to stay in a game where the team as a whole was shooting quite poorly (33.3 percent). Unfortunately, poor shooting has plagued the team all season long — a fact that was all too obvious in a game they could have won.

Despite fielding a team of talented players, Central has failed to shoot the ball well all season long, as they hover at about 40 percent shooting as a team for the season. This anemic offense is of special concern upon a closer look at the Chippewas’ defense.

Central has allowed opposing teams to score 100 points more this season than they themselves have put up, and that difference has a lot to do with personal fouls. The team has committed 100 more personal fouls than opposing teams as of Saturday night, and those fouls have led to nearly 90 more made free throws by Central opponents on the season.

That point differential has been a factor in why the Chippewas find themselves down early in games and with a losing record late in the season. By accruing so many personal fouls, the team is giving their opponent a crucial advantage in games where they cannot afford many mistakes. If Central can play better defense and limit poor body control fouls, they will keep their opponents off the line and potentially win more games.

One major downside of the Chippewas’ season has been their tendency to fall behind early in games and thus they are forced to constantly play catch up. While this gets the starters plenty of playing time, it results in decreased minutes and game experience for the younger, less developed players. This starts a trickle down effect so that by the time these same players are counted on as full-time starters for Central, they stand to have significantly less game experience than their MAC counterparts.

It is important that the team learns to come out of the gate stronger and ready to play early on, so that the full depth of the roster can see playing time and evolve into the best players they can be. Additionally, the staff needs to do its part in making sure those bench players are well suited for court time and can perform at the necessary level when their number is called.

Overall, the men’s basketball team at Central has a lot of work to do before they can contend for the MAC title, but to say the necessary framework is not there would be remiss. The biggest struggle for this team is winning the fouls battle, as they foul way too often and don’t capitalize on enough opportunities of their own at the foul line.

Offensively, the Chippewas seem to have found their much needed second and third scorers, and hopefully — as these scorers and the rest of the team mature and develop — they will shoot better as a team. While it may be a missed chance to dominate the MAC this season, it seems that the Chippewas have the necessary framework to form one of the top tier teams in the MAC basketball scene.