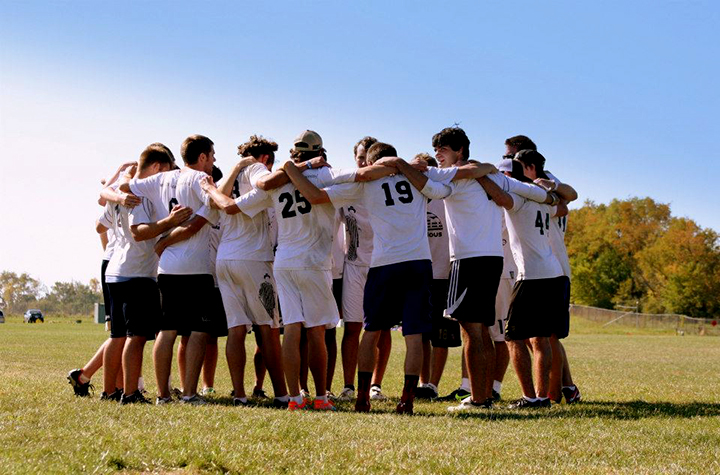 From 10 p.m. to midnight, Notorious BID can be found practicing Ultimate Frisbee better known as “Ultimate” in the Indoor Athletic Center.

With a football-like style to it, Ultimate allows two groups of seven to compete against one another to score a touchdown in the end zone, which is worth one point. The only catch is players with the disc can’t move and the game is a self-officiating sport.

Senior and team captain Kyle Griffin said the name has stuck with the team ever since he joined.

“The name has been around since my freshman year and in Ultimate when you dive for a disk it’s called a bid,” Griffin said.

This is Griffin’s final year playing Ultimate and he has enjoyed playing with his teammates who he calls a “close-knit family.”

Looking back on the season, Griffin said he is proud of what his team has accomplished.

“It was a good year,” Griffin said. “We finished the fall with a winning record, taking Michigan State to sudden death and beating Eastern twice.”

Junior Garren Salk has been with Notorious BID for two and a half years. Salk said he has learned several things from playing ultimate.

“I have learned a lot about the sport from playing in a college setting, rather than outside with a bunch of friends,” Salk said.

The Central Michigan’s Men’s Ultimate club team is proud of the friendships they’ve built, but admits to it being a challenge to find people who are interested in playing the sport.

“Finding people who want to play consistently,” Salk said. “We have a problem retaining members, so we’re trying to recruit new people,”

Salk said Ultimate can be a very underrated sport. He said it doesn’t deserve the proper respect it should receive.

“People who are exposed to it learn quickly that it’s a really awesome group of people and it’s a really fun sport,” Salk said. “Once you start to play, it sticks with you for life, it’s something that you’ll always do.”

Salk said his favorite ultimate memory was during spring break when the team went down to Georgia for a tournament. There was between 80 and 90 other teams participating in the weeklong tournament.

Salk said he enjoyed escaping the Michigan weather to play against several teams and meet new people who enjoyed the sport.

Freshman John Birrell joined the team his first semester. Watching ultimate Frisbee videos on YouTube and playing with his friends inspired him to give it a try.

Birrell said he is glad he joined the team. One of the initial goals he wanted to accomplish when joining besides getting exercise was making new friends.

“My favorite part about the sport is the unification on the team, it’s nice to have friends on the team,” Birrel said.