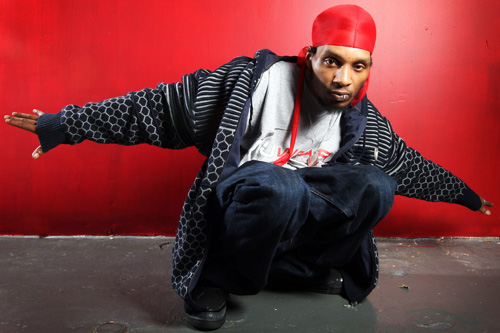 Del tha Funkee Homosapien, Del, Deltron 3030, Deltron Z and Sir DZL (Diesel) – if these names don’t sound familiar, you have been stuck under a rock longer than James Franco was to get his Oscar nomination.

Del, an Oakland, CA native, has been a hip-hop staple since his days with Da Lench Mob (cousin Ice-Cube’s associated group). The wordplay master saw the creation of his first studio album, “I Wish My Brother George Was Here (1991)”, and the hit single “Mistadobalina” at only the age of 18.

Breaking away from his musical relationship with Ice Cube, Del’s classic album “No Need For Alarm” was developed. The sounds of ‘Golden-Era’ hip-hop, and Oakland styles have made it a genre standard.

Del’s work hardly stops at his eight solo studio albums. He is the founder of the Oakland underground super-group Hieroglyphics. The group’s esoteric presentation of hip-hop has taken on a flourishing life of its own.

The three-eyed smiley face logo used by Hieroglyphics has progressed from stickers, to appearances in music videos, fan tattoos, and even comic books (T-shirt worn in “The Walking Dead“, Issue 5).

(We didn’t see a Hieroglyphics shirt donned during the adapted TV series of “The Walking Dead” on AMC… what’s up with that? Looking at you AMC.)

The funky homosapien’s reach demanded attention with his collaboration hit, “Clint Eastwood”, on the Gorillaz’s self-titled album (2001). The track peaked at number four on the UK charts with 480,000 albums sold.

As an artist and producer, Del has become involved with countless side projects – many with producer Dan the Automator. DZL brings undeniable prowess on the “Handsome Boy Modeling School (1999, 2004)” albums, and obviously “Deltron 3030 (2000)”, which gained a massive following for its futuristic concepts.

Del’s rhymes are smart, insightful and sometimes downright goofy. “If You Must” (“Both Sides of the Brain, 2000”), featured in Tony Hawk’s Pro Skater 3, is an ode to “funky smelly people” – as Del states in the video.

If you know the sensation of controlling the music at a large social gathering, or have spent days of your young life playing Tony Hawk, Del tha Funkee Homosapien most likely has a spot on your iPod. Del is a lot like funk. It’s not just music he makes – it’s an attitude.

PY: The funky theme has been a big part of the Del persona. How did this start?

DEL: I’ve always been a big fan of funk. I went as far as studying about it. The origins and stuff like that. Like, I was really into that. That’s one side of it, but funk is not just a musical style. It’s like an attitude – you know what I’m saying?

PY: Absolutely. As far as funk goes, if you had to narrow it down – who would be your favorite?

DEL: Oh, hands-down. It’s really about doing your own thing, and that’s what hip-hop was originally about too. I guess you could say it still is, but people ain’t really doing that. It’s changing into something else. But all of it – has to do with funk. Funk was really just an offshoot of the blues, right?

DEL: Well this is how the blues go. When African slaves figured out that “We’re not going back to Africa”, that’s when the blues set in. You know you just feel like that. That’s why you can’t manufacture the blues. It’s a feeling like, “It’s over. You just have to deal with it. It sucks, but hey, you’re going to have to deal with it.”

PY: You said earlier that hip-hop used to be about having an attitude. You have never shied away from this. How do we make hip-hop about having fun again?

DEL: To be honest, I think hip-hop is still about having fun, I just think that young people nowadays are going about it in a different way. Of course it’s not going to be the same as when we were doing it. To tell you the truth – when I was younger my mom … well my mom still don’t like it…

DEL: She thought it was noise, pretty much, straight up. She was like, ‘this is not music. This is trash. I don’t know what you kids are into.’ Now we’re old. We’re where our parents were back then. Now we’re sitting around and we’re saying the same shit. You know what I’m saying?

PY: Yea. Has this changed the quality of the music then?

DEL: For me, I still remember what it is like to be young. I haven’t changed very much. I’m always looking for something new. For me it boils down to, are they doing their thing or not? To me it don’t matter what your subject matter is. That’s your preference. You know, that’s where you come from. It’s what you do with it. I think a lot of people just want to be hip. You know? They’re just trying to look cool or whatever. But you’re always going to have that. Whenever there’s a counterculture, you have people that are going to try to adapt to it. Business minded people in general who try to manufacture it and sell it to the youth because they can see that. Like, ‘Okay, this is something we can put in a box and sell to these kids… who’ve got pretty much disposable income.’ Some people just buy into it and don’t know what it’s about. Some people just want to be in, you know what I’m saying?

DEL: Yea, bandwagons kind of. I will say this though – I think that the quality of music is actually worse than before. I will say that. I don’t think that’s an illusion, like we’re old and can’t see it any other way. The musical quality has definitely gone down.

PY: What about the use of sampling? Some groups are over sampling nowadays. The songs are entirely samples. Others refuse to use samples because of royalties and other business issues. Has the decline of traditional sampling hurt the genre?

DEL: You know, I don’t want to say that there can’t be hip-hop without samples. Because the first real hip-hop records, in my opinion anyway – the records Rick Rubin produced pretty much, were just stark naked. A beat. You know what I’m saying?

DEL: So I wouldn’t say it’s solely dependent on samples. And to a large extent, the youth today have gone back to those origins. In a lot of ways I like a lot of the stuff now. I still sample, but you got to be clever about it. Why I think the whole sample thing blew out is because people started getting lazy. You had better technology, which allowed for longer sampling with better sound quality. People got lazy. They just looped the whole thing. Not only that, it sounds like that record too. Before, if you used something with a low bit quality sound, it actually changed the sound of that song. You damn near can’t tell where they got it from because the song don’t even sound the same. But now, you’re getting to the point where…okay…’I know where that’s from.’ It sounds clear as day, and they had no shame in using the whole fucking record.

DEL: But that was never hip-hop to me. That never was hip-hop. If you used the records you were more interested in finding sounds than with a looping a whole phrase. You were just looking for sounds. You just need one little sound. Then you put those sounds together and make the beat percussionally.

PY: What are you listening to right now? Maybe when you’re in your car, or at home.

DEL: I spend a lot of time trying to devise new shit. Making new music is hella important to me. You know? So that’s usually what I’m doing, but I listen to a few of things. I tend to listen to more street-oriented urban shit. You know, like Suga Free, DJ Quik, Cam’ron, Movado… they’ve got to be lyrical, but they don’t have to be super lyrical. They have to have talent with what they’re doing. It’s not like I listen to ghetto shit for no reason. They’ve got to be tight.

PY: As far as the Deltron 3030 concept, what was your inspiration for its creation?

DEL: The concept for the character itself, or the product itself, came from Megaman – the game Megaman from Capcom. I’m a Capcom fan; a huge Capcom fan. To the point where I’ve studied, business-wise, the moves they’ve been making. I realized they had Megaman, and then they had Megaman X. Megaman X was basically the same game, but with souped-up graphics, and you could do crazier shit. You know what I’m saying? Everything you love about Megaman – just a futuristic version. So I figured, ‘That would be cool if I did a Del project like that.’ I debated with it for a while, you know, played with it. I thought, ‘Okay, it warrants its existence as a product.’ Like, it’s different enough from the regular Del that it’s worth pushing it further. So I told Domino (Hieroglyphics producer) about it, and he was living hella close to Dan (the Automator). Dan said he was willing to work on it, so Dom came back to me. He pretty much facilitated the whole connection between us.

PY: You’re work has been featured in multiple video games – many being skateboarding games. Being that skateboarding has traditionally been a punk/thrash/metal culture, what is it about Del that the skateboard culture relates to?

DEL: I come from a whole type of rock aesthetic. Skaters. These are kids that I used to kick it with when I was going to school basically. So I’m not surprised that they’re into my music. A lot of the same concerns; a lot of the same ideals I share with them. That, and counterculture shit… I’m into counterculture.