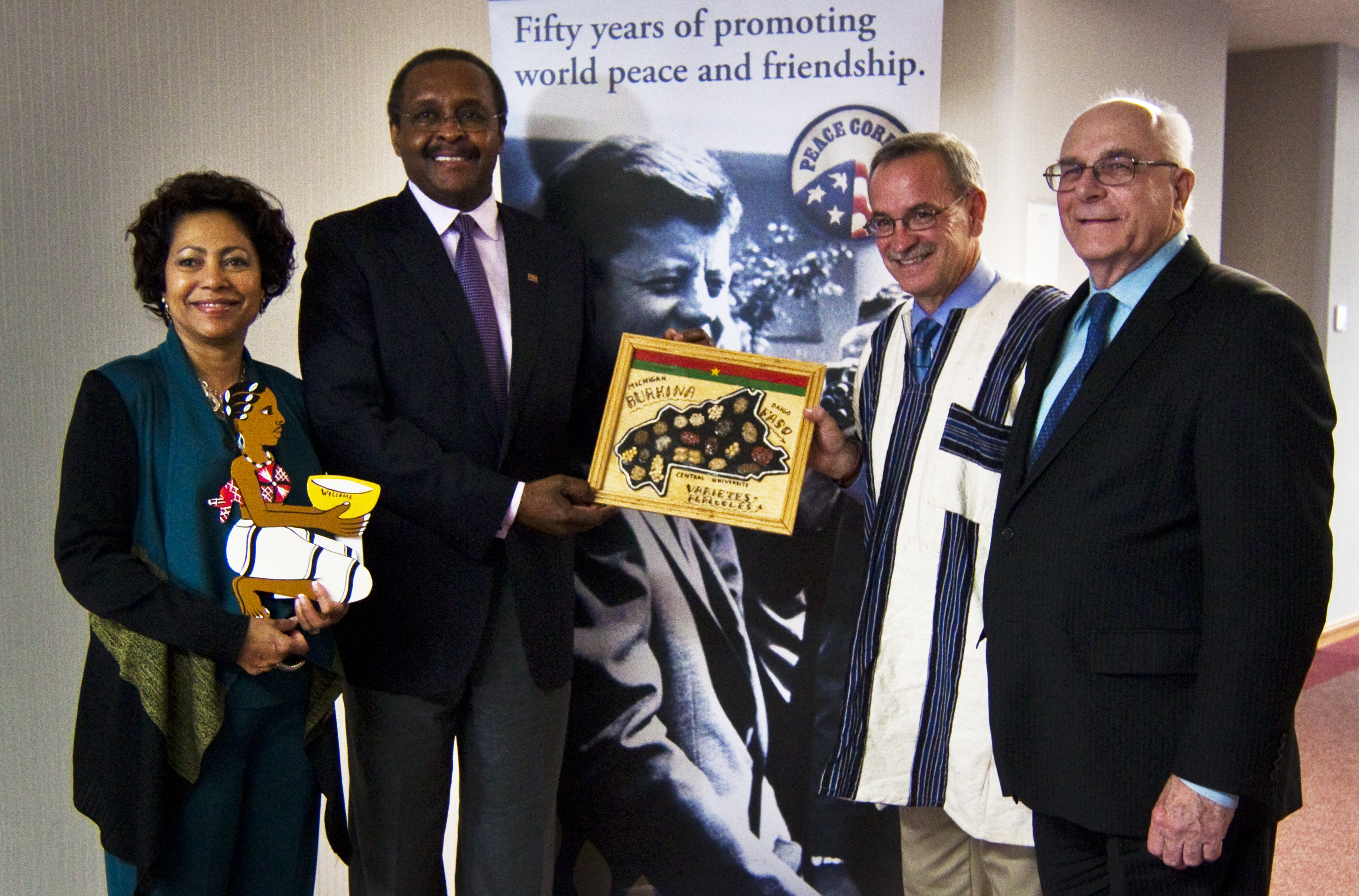 Ever since Lavoie left Burkina Faso, he has maintained a lifelong connection with his host family, friends and the people in the community there. He is currently the president of “Friends of Burkina Faso,” a non-profit charitable organization that supports funding for projects in the country, and includes a network of former Peace Corps volunteers who spent time there.

In honor of the 50th anniversary of both the Peace Corps and Burkina Faso’s independence, Lavoie and “Friends of Burkina Faso” planned a month long celebration and tour of the country, making a stop at Central Michigan University.

Prior to leaving for the celebration, Lavoie got in touch with Judge Fred Mester and together they communicated with President Ross about becoming involved with the celebration.

“We got acquainted and then President Ross, with the support and encouragement of Judge Mester, was willing to imagine greater things,” said Lavoie.

President Ross then decided to make a donation which went towards fixing an ambulance in the Burkina Faso town of Dargo, which the town could not afford to fix and had been broken down for several years. Lavoie said without an ambulance, many of the people from Dargo would face danger if they ever had a medical problem.
“Even the most basic medical problems can become grave,” Lavoie explained. “In the cases of more severe medical problems, the local town just doesn’t have the capacity to deal with it and if you don’t have the money and the ability to go to a bigger town, then you’re just going to die there.”
The ambulance was taken to a larger town where it was fixed through the donation made by CMU. Lavoie thanked President Ross and the other people from CMU that helped make the donation towards the ambulance possible at a gathering in the UC on Thursday, April 7.
“Make no mistake—what you did made all of these moments happen and all of those moments were brimming over with the power of the ideas of these anniversaries—that is the power of human independence and how that independence works in peaceful ways to advance and improve the human condition,” Lavoie said to President Ross.
Lavoie said that he hopes Central Michigan will maintain a relationship with Burkina Faso in the future, possibly through study abroad or other exchange programs.
“I hope that the students of Central Michigan University see through this the great value of friendship between people in different parts of the world,” he said.
Lavoie said the presence of CMU is known and felt by the people in Dargo, who are very grateful to have an ambulance to transport people again.

Lavoie said a quote first in the local language of Dargo and then in French.

Translated in English, he said: “The whole world does not have friendship, but we have it!”

GCM writer, Mara Kieren spoke with Lavoie in an exclusive interview about his experience in Burkina Faso.

How did you originally get involved with Burkina Faso?
Michael Lavoie: I was a Peace Corps volunteer in Burkina Faso from 1975-1977 where I was a well digger.
Did you stay involved the entire time afterwards or did you come back?
ML: In 1977 when I came back, I proceeded to go on to law school and then later a career as a lawyer, but at all times I always maintained contact with my host family and people in Namtenga. Back in those days we didn’t have cell phones or email so we wrote letters back and forth, year in and year out.
GCM: You said the Peace Corps began and Burkina Faso’s claimed Independence in the same year?
ML: Burkina Faso obtained its independence from France’s colonial rule in 1961, the Peace Corps began was started the same year when President Kennedy issued an executive order.
How did you get in touch with President Ross?
ML: Judge Mester and I are friends and I know that he is an activist and then we thought we should contact Central Michigan and see if they might be interested in doing this. In less than a month or so we got acquainted and then President Ross with the support and encouragement of Judge Mester was willing to imagine greater things. Then they donated for the ambulance to be repaired. The ambulance existed already. It had been broken down and busted for a couple years and they just didn’t have the money to repair it and it was kind of a perfect fit for something that would take about $1,000 to fix.
In a country like that, how does not having an ambulance affect the people?
ML: It affects them a great deal depending where they are at. In the town of Dargo where there is a local clinic and maternity ward that can usually handle routine medical problems. However, even the most basic medical problems can become grave. Malaria is very widely prevalent in that part of the world. In the cases of more severe medical problems, the local town just doesn’t have the capacity to deal with it and if you don’t have the money and the ability to go to a bigger town then you’re just going to die there. Or if you do have the money, the ability to have emergency transportation where you can actually be laid down in the back of the ambulance on a stretcher in a safe way to stabilize conditions is possible. That’s the beauty of the ambulance, it saves life.
Do you think Burkina Faso and CMU will maintain a connection?
ML: I hope they do, and I believe that they will. You can see from talking to me that I’m very passionate and my life is very enriched by the friendship with my friends in Burkina Faso. And so I hope that Central Michigan University and its view as an institution feels the same way. I can tell you that if Central Michigan is interested in getting into partnerships in some sort of exchange program, why not think outside the box a little bit and maybe look at a place like Burkina Faso.  Sure, there’s obstacles. There’s language. Well, welcome to the world. That’s obstacles. If one of you young folks was interested in going I would say study French, learn it. Study the local language, learn it. Then you’ll be in a position for when you reach out to the uncommon, you find the uncommon.
What was the most rewarding moment?
MJ: We attempted to obtain a skype connection between pen-pal kids in West Bloomfield, Mich. and my village in Namtenga. We had to hold the laptop up high to get a connection because it’s all through cell phone service not broadband. So for about 10 seconds the Skype connection lasted where you in Bloomfield Hills, Michigan and you in Namtenga saw eachother and said ‘Hi, I’m your pen-pal’. Everyone said that of all the great moments that happened in this month trip and tour around the country, that moment surpassed all others.