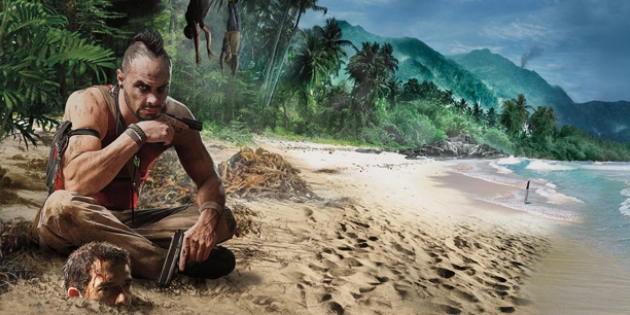 A wise man once said, “Randomness is what makes a game fun.” He said that years before “Far Cry 3″ came out and he could not have been more on the nose.

Players begin as a privileged 20-something-year-old who goes on a vacation on some unnamed south-east Asian island for a vacation with friends. *Boom!* Congratulations, the character is now the lower end of the world’s largest slave running trade. After a successful escape, it is now the gamer’s job, believe it or not, to help the friends.

That summary was just the beginning, for some unknown reason the people of Island X decide to immediately trust more than could’ve possibly been earned. Simply by becoming a “warrior,” island natives decide the character is competent enough to rescue the island from the slave-selling, drug-running overlord of Island X. Upon roaming the open, tropical world it becomes immediately apparent how much work there is to do if it is to be liberated.

Island X has enemy outposts scattered about the island, as well as radio towers that conveniently block players from map areas. When gamers take over radio towers they’re welcomed with free weapons, which could have been purchased before. However, winning over enemy camps is by far the best part of the game.

Random animals are more exciting than the slavers themselves. The hunters often become the hunted as stealthy tigers enter the mix. The best part about “Far Cry 3” isn’t the story (that’s only okay) or the characterization (even though it’s excellent). What makes “Far Cry 3” great is its unpredictability.

Gamers on a side-quest looking for a downed plane or locating enemy infantry will, out of nowhere, get attacked by a bear or a tiger or any other animal that will easily kill more often than be killed. These animals are randomly generated.

As players explore Island X, they will stumble upon hidden caves, coves leading to more questions than answers and, among other mysterious geographical locations, waterfalls that hide (more often than not) secrets behind them.

The beauty of “Far Cry 3” is what is undiscovered. Players will find themselves afraid to think of what may have been missed and will spend hours looking for something that may not even exist. An imporant sidenote: “Far Cry 3” is a shooter game. Was that not mentioned? Oops, my bad.

Here is “Far Cry 3” in a nutshell via my personal experience: I was hunting deer to upgrade my equipment holster and ran into some mercenaries. I decided to run because my health was low and as I was running I came across a literal chasm. At the bottom of the chasm was water, safety, so I jumped, though dove is a more appropriate word. When I surfaced I saw a group of vines meant to illustrate, “This is where you climb out.”

When I did so I then went through a series of jumping and climbing challenges, eventually leading me to a cave. The cave led me through a labyrinthine series of twists and turns bringing me to an idol on a pedestal. I grabbed it and “Relic Found!” appeared on my screen. Want to guess how many relics there are? No? I’ll tell you: 119. That’s not a typo, 119. And that was only my first.

To make a long story short, “Far Cry 3” is a fun shooter. The option to be stealthy or Rambo is great, but what makes it shine is its unpredictability. It is certain that no one play will be identical to the next.