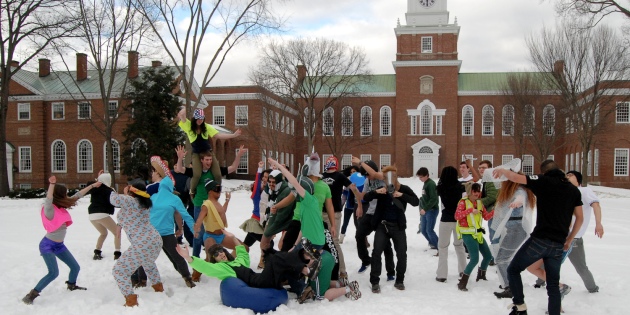 By now, most Internet users have watched or at least heard of the Harlem Shake. Move over Gangnam Style, for this viral video phenomenon has taken the web by storm, even grabbing national news headlines. The fad seems to be on track to become one of the most talked about memes of 2013.

To create you very own Harlem Shake meme, first you must have someone, in frame, bopping to the beats in the track. This person usually will be wearing something over their head and moving along among other people who are acting normal.

About 15 seconds into the track the beat drops and the video jump-cuts to a crowd of people dancing crazily. These people are usually dressed in random items of clothing, ranging from fully clothed to people dressed down to their skivvies. Near the end of the video, there is a sound bit of either a rawr or a growl. At that point, the video usually will be slowed down and cuts to black.

That’s really all the Harlem Shake meme is. And perhaps that is why this meme has become so viral so quickly. It’s something that can be filmed in mere minutes and it doesn’t take a lot of video editing knowledge to create. It’s just something fun to do and even funnier to watch.

In total, the meme usually ranges from 30 seconds to a minute and a half in length but garish hundreds of thousands of video views. In just two weeks, there has been more than 11,000 videos uploaded to YouTube and has logged more than 44 million views thus far. On average, the Harlem Shake videos have about 40,000 views daily.

The video has become a humorous way to bond within groups, where just another day at the office can turn into air-humping and doing the Bernie.

Organizations of all shapes and sizes are joining in on the fun. The Norweigan Army recently posted a video of their forces shaking it and grabbed over 15 million views. And who knew downtime on a sports team could be so fun? The University of Georgia’s swim team‘s version of the Harlem Shake got more than 18 million clicks. Even Central Michigan University is joining in the viral fun with their own study hall interpretation.

With the Harlem Shake being a newbie by viral video standards, it’s already being compared to Gangnam Style, which is a music video by the South Korean K-Pop sensation, Psy. To date, Gangnam Style has had more than one billion views on YouTube and has spawned thousands of parodies of people trotting to music and swinging an invisible lasso.

So, what do you guys think of this new dance craze? Is the Harlem Shake going to surpass Gangnam Style or will it just disappear as quickly as it came to be? Love it or hate it, odds are you’re going to hear it. A lot of it (cue the bass drop and arm flailing).