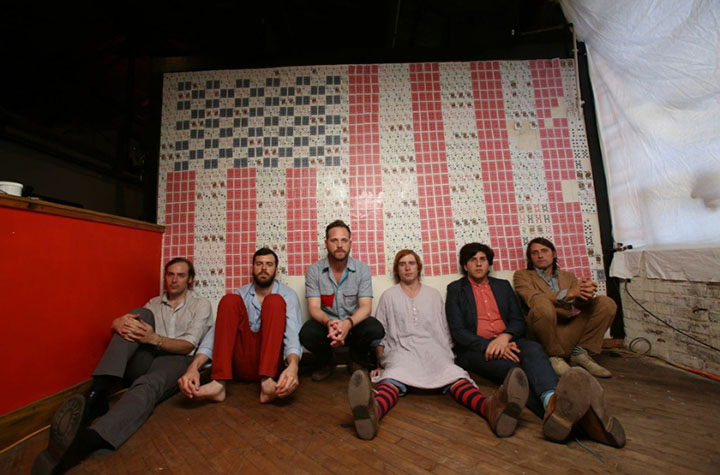 With the release of their studio album “B-Room” this week, psychedelic, indie-laced veterans Dr. Dog continue their seemingly reluctant push into the indie rock limelight.

Hailing from Philadelphia, Pa., the sextet has been doing it their way since 1999 and don’t look to be winding things down any time soon. Much like The Beatles under the leadership of Lennon and McCartney, Dr. Dog is led by the two-headed front man tandem of Toby Leaman (bass guitar) and Scott McMicken (lead guitar). The band prides itself on an organically constructed live sound evident in their newest single “The Truth.” In fact, all six members rolled up their sleeves and built their “B-Room” studio while bonding over carpentry and music.

The band came to prominence because of a long standing friendship with My Morning Jacket front man Jim James. They toured with My Morning Jacket in 2005 and have since gained a national following. Despite their mild success as of late, Dr. Dog remains grounded and loyal to the city of brotherly love and they have not forgotten that their roots remain vested in the heart of Philly. In an interview with Billboard magazine, Leaman expressed his thoughts on the city that birthed the band.

“When we were coming up, if you got any kind of traction at all in Philly, you immediately beelined to New York,” Leaman said. “That’s not the case anymore. People are getting it together in Philly and sticking around.”

With vocal harmonies similar to that of The Beatles, The Beach Boys, and The Band, Dr. Dog holds true to its roots. From the dark but catchy bass-driven “How Long Must I Wait” to their fantastic cover of Architecture in Helsinki’s “Heart it Races,” Dr. Dog will inspire whistling and singing along in no time.

For those with an interest in bands such as Fleet Foxes, Delta Spirit, Edward Sharpe and the Magnetic Zeros and Mumford and Sons, Dr. Dog is a band definitely worth checking out. They are currently on tour opening for The Lumineers and are making their way to Detroit on Nov. 9 at the Majestic Theatre.

Be sure to check out their entire anthology, especially 2012’s “Be the Void” and of course, “B-Room.”