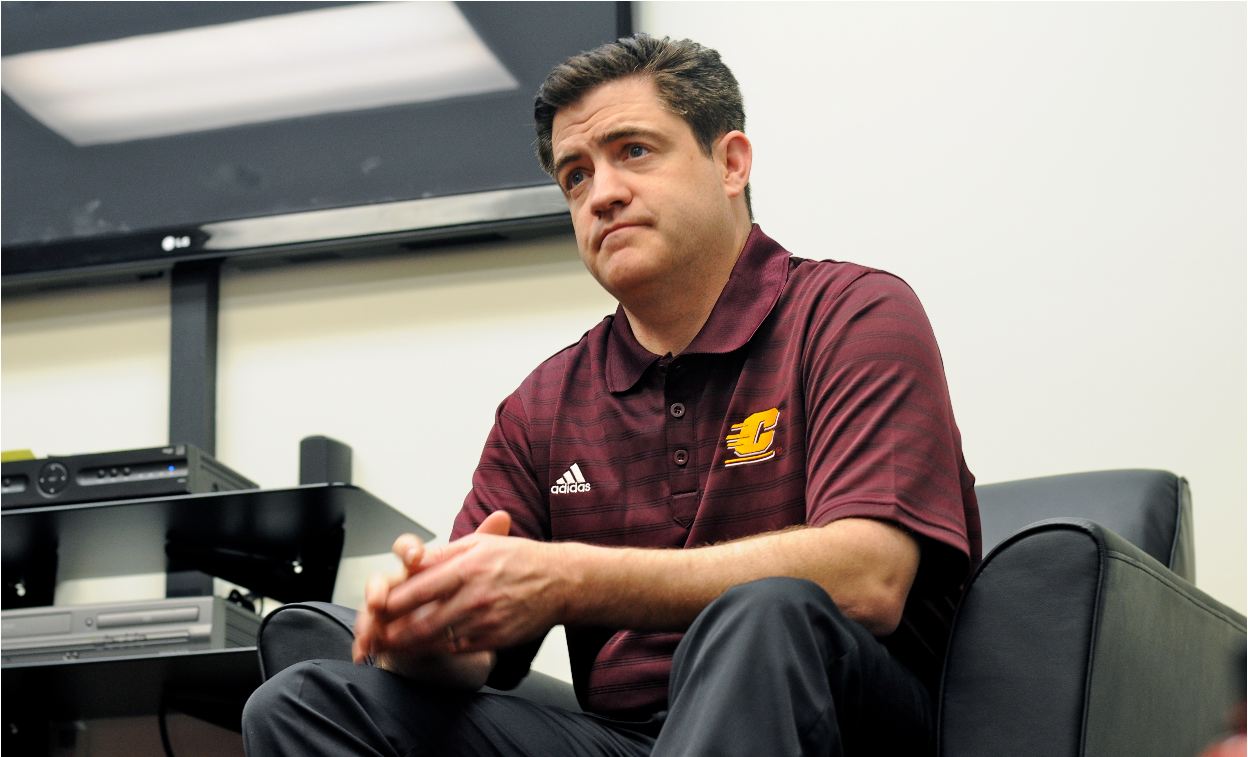 New Central Michigan men’s basketball coach Keno Davis made his way through the hallways of the basketball offices in the Rose Center, trying to get everything settled during one of his first days in Mount Pleasant.

“I’m enjoying it, but it’s busy,” Davis said. “The first couple weeks are about assembling a staff, getting to know the team, but it’s been enjoyable.”

The Iowa graduate will hope to recruit the types of players to fit his up-tempo, pressure defense style that he learned from his father, Tom, while serving as an assistant for him at Drake from 2003 to 2007.

“The basis of what I do, the foundation is from my father,” Davis said. “When you grow up as the son of a coach you grow up in the gym watching it. It gives you a great perspective. You go in with your eyes open.”

Tom was a head coach in college basketball for 32 years, including stops at Boston College, Stanford and Iowa, during which he amassed 598 wins and was named The Associated Press National Coach of the Year in 1987.

“Some of the best advice my father gave me was to go out on my own and work for different coaches,” Davis said. “Learn different styles, different techniques, different defenses and different philosophies.”

After finishing his work as an undergraduate assistant at Iowa, Davis, 40, went on to be an assistant coach at Southern Indiana (1995-97) and Southeast Missouri State (1999-03), before returning to Drake in 2003 to have the same role under his father.

Those experiences outside the tutelage of his father allowed Davis to develop his own style of coaching.

“I’d like to think I’m a very positive coach,” Davis said. “I believe people can be motivated more with positive reinforcement, than they can on the other side of the spectrum with being negative.”

Davis fulfilled the head coaching duties at Drake following his father’s retirement in 2007. After being named AP National Coach of the Year in 2008, just as his father was, Davis moved onto the Big East Conference to coach the Providence Friars. Once Davis finished his third season with Providence in 2011, he joined the Big Ten Network as a studio analyst.

“The television was a good experience for me,” said Davis, who comes to Mount Pleasant with his wife Krista and his two kids, Brady and Mara. “I enjoy breaking down games and being able to talk about it; and when you get to do that you get to spend more time with your family.

“Yet, in the back of my mind I knew I still wanted to coach. That was something that still drove me and I wanted to look and see if I could get the right fit. And when the Central Michigan job was available, everything felt right about it.”

Bringing his father’s coaching philosophies with a Keno twist to CMU will contribute to his hope of getting the city closely involved with the program.

“We need the entire community to rally around this team,” Davis said. “We aren’t going to be successful unless our fan base come to the games and support us.

“We need to get out in the community with our student-athletes so we can get them to come to games. They’re going to see guys who work extremely hard and they might not see the finished product on day one, but as they come back they are going to see improvement and I think that’s what fans want.”

But Davis didn’t just have words for the community, he stressed the importance of the student body at each contest.

“To the student body, what I want at our games, I want the Rowdies to be rowdy,” Davis said with a smile. “I want this to be one of the toughest places for any team to come in and play. I don’t want them to try and be a different student group, I want them to be Central Michigan.”

Come November, those Chippewa fans will find out if Davis navigated the halls well enough to give them what they are hoping for — a winner.