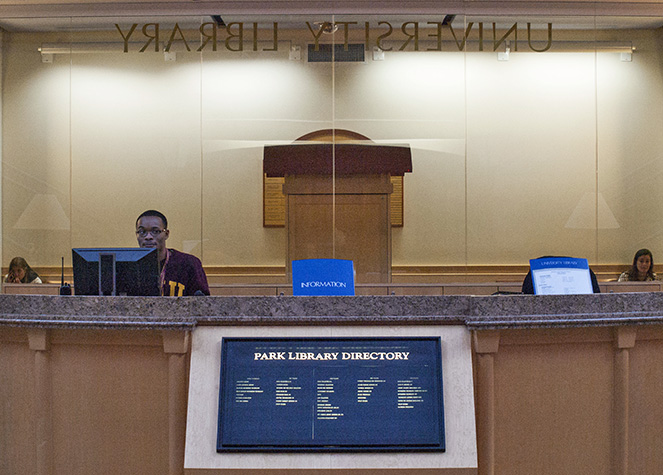 Some college students dread the library, while others schedule their day around the library’s hours of operation. During the daily hustle and bustle, it is reassuring to know others still show kindness and compassion, even in the library, which is geared around silence.

The gem of Central Michigan University’s Park Library is Juwan Holley, a junior who has worked there for a year. With his official position being a library monitor, he has a range of duties including sitting at the information desk, answering questions pedestrians have, moving and setting up events, and finding books for patrons.

“When I applied for the position, there was no immediate response to my application,” Holley said. “Luckily, I got the job and I’m blessed and grateful for it. Most of all, I love the peacefulness interaction with all CMU students and surrounding community.”

As a broadcasting major, his job has brought a host of media opportunities. The library offered Holley to do the announcements and web videos to publicize the building.

Every person who walks in on his shift gets a smile and genuine greeting. Most people either walk along or swiftly answer the greeting not to be rude.

“[Holley] is my partner in crime and brother in Christ,” junior Lorreal Jones said. “Since the beginning of the semester, it’s felt like we’ve known each other forever. I admire his positive attitude. He reminds me to embrace, cherish and relish each opportunity.”

His familiar face and reputation as the “over-energetic one” at the main desk landed him on the cover of the library’s webpage doing what he does most, smiling. Answering questions physically or pointing students in the right direction electronically, he has become the epitome of a person dedicated to his job.

Holley’s positivity is apparent to everyone, especially his co-workers.

“I just got here and he was one of the first to welcome me to the job with open arms,” junior Tonya Jennings said. “Also, he is my trainer for the library monitor position, so it’s awesome to learn from a person who likes their job and is always happy and energetic.”

His job may seem simple, but it is not as easy as many may think. People enter the library with an assortment of questions and when the answer is not known, reactions are less than polite. At other times, there are unusual occurrences that have to be dealt with.

“Over the past summer there was a man dressed in women’s clothing acting in the same manner as a woman. As that’s not already different enough, he started propositioning patrons in the library for sex,” Holley said. “He became relentless using the women’s restrooms and harassing other student workers during the 12 a.m. until 2 a.m. shift.”

During the summer, the student population is low but people acting in this manner is never a positive environment for those trying to study in a safe, productive environment.

“He claimed to one of the passerbys that he was homeless and wanted her shoes and money and if need be necessary, he would fight her for them,” he said. “The incident spiraled out of control to where four police officers were called and they escorted the beggar out of the library. As for the man, he was charged with harassment and he is now permanently banned from the building.”

Every job has their moments of drama, but Holley brings a smile and attitude that warms the Park Library.

“Each and every day comes with something new,” Holley said. “I approach it with a smile and a hello.”