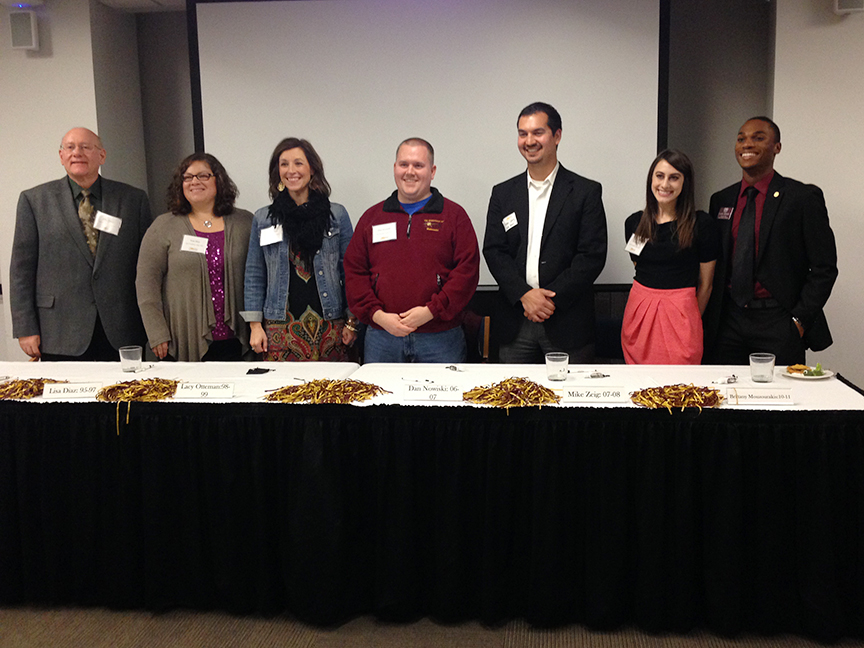 Over the last four decades, a lot has changed at Central Michigan University. New buildings, new majors, a new student body. What has stayed constant?

Students had the opportunity to meet some of these leaders at “Life After CMU,” an event hosted by the Future Alumni Association and Student Government Association.

A social hour and panel discussion was formed for students to network with six former SGA presidents from the past 40 years. CMU students and alumni had the opportunity to socialize about past and current CMU experiences, and these former presidents had a lot of advice to share.

With graduation just around the corner for some, many students gathered to get inspired about their time after CMU.

Each went on to tell their story about SGA and how they have crafted a career from what they learned in their time at CMU.

“I got involved (with SGA) because a group of friends asked me if I would go picket the president’s house with them,” Diaz said. “I didn’t know why, but I was influenced because I liked my friends and decided to support them.”

Throughout their discussion, the panelists reinforced the importance of actively pursuing your goals, no matter how small or large they are.

“What do you want to do? And how do you want to make a difference?” Zeig said. He would ask those questions as a student to empower change at CMU and throughout the community.

Many of us spend time worrying about the future, and while this is important, panelists encouraged students to remember to live in the present as well.

“What should we do now that we’ll have wished we did to benefit ourselves after college?” Thurston asked. Immediately responding, “I wish I would have studied abroad,” Otteman said. “Once you leave (college), you have limited time for adventures like that.”

Students appreciated the wisdom offered, and some even left the event with a new perspective.

“I enjoyed having such a diverse group of panelists ranging in age and profession because it helped me visualize where I could see myself in the next 10 years,” said Dundee senior Alyson Beland. “Rather than viewing my last semester of college as a wrap up to my college career, this session helped me understand the importance of networking and making connections with those outside of my degree.”