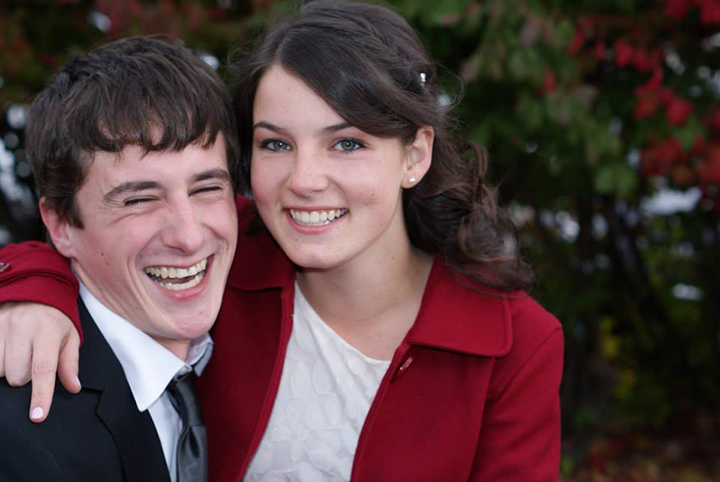 While most students spend their time in college discovering what they’re looking for in a long-term partner, a small group has beat many of us to the punch.

Kuntz came to Central Michigan University as a Leader Advancement Scholar in search of not only a college degree, but also of herself.

A first generation college student, remaining in school and graduating was her main priority, and everything hinged on a good academic performance. While Kuntz was preoccupied with her studies and starting a new legacy for her family, something incredible happened – she fell in love.

In spring 2012, she met her now-husband, John Kuntz, and soon, they were inseparable. They were both freshmen at CMU and conveniently met through mutual friends.

“I wanted to do everything with him,” Kara said. “We were able to hang out with the same friends, manage work together and were immediately committed to planning our lives together.”

After a year and half, the couple had developed a stable relationship, moved in together and decided to get married. Although they were young, they felt they were ready for the commitment of spending the rest of their lives together.

“We knew it wasn’t typical, but we didn’t see any reason to wait,” Kara said. “We decided to get married because we were ready.”

Today’s societal norms dictate that college students should seldom wear a wedding gown before a cap and gown. Ditching those norms, the  Kuntz couple said their vows at the Isabella County Courthouse on Oct. 25, 2013, officially tying the knot.

“I know we made the right decision to marry young,” John said. “We were independent, committed and supported by all of our loved ones.”

Family and friends were there for their special day, and continued celebrating after the ceremony with a Pinterest-inspired fall reception. Following the ceremony was not only newlywed bliss, but some newlywed questioning by those same friends and family.

“When friends and family heard the news, congratulations were often followed with ‘So, are you pregnant?’” Kara said. “People didn’t seem to understand why I would want to get married so young if I didn’t ‘have to, but I wanted to.”

As an involved student who has held down a job throughout her CMU experience, Kara has found a balance between her marriage, work and academics. Married couples are sometimes disconnected from the student community, but Kara and her husband break this norm as well.

“Just because we’re married, doesn’t mean I have to change my school and social habits,” Kara said. “We are still active with the student community and I remain committed to school.”

Even with a busy schedule, this couple shows it’s possible to have a young, and more importantly, healthy marriage before earning a degree.

“We have a perfect life — great friends, a cozy two-bedroom apartment and the cutest dog,” Kara said. “We are in love and surrounded by a supportive community.”