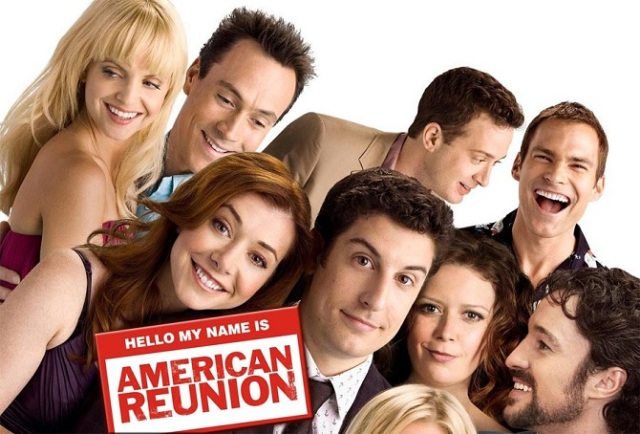 My generation was too young to appreciate American Pie when it was released in 1999, but as teenagers my friends and I enjoyed the movie immensely. The raunchy teenage comedy that centered around four teenaged boys and a pact to lose their virginities was so successful that it spawned two sequels: American Pie 2 (2001) and American Wedding (2003). And now, nearly 13 years after the first film was released, American Reunion has hit theaters.

I knew exactly what to expect going into the movie: outrageous comedy, sexual references up the wazoo (no pun intended) and Eugene Levy’s infamous eyebrows. I wasn’t disappointed, in those aspects anyway. Reunion follows Jim (Jason Biggs) and his wife Michelle (Alyson Hannigan) as they head back to East Great Falls for their class reunion. They meet up with old friends Oz (Chris Klein), Finch (Eddie Kaye Thomas) and Kevin (Thomas Ian Nicholas). Chaos ensues when they spend the weekend attempting to recreate old times. Crashing parties and pulling pranks on high school kids is funny when you’re actually in high school, but when you’re 30 and still doing it, it’s just plain creepy.

The movie tries hard to appeal to old and new audiences alike. There were many references to the first movie, “That one time at band camp” and Finch banging Stifler’s mom being the most popular. It also appeals to a new generation of viewers. Facebook was mentioned multiple times, mostly with Stifler (Sean William Scott) complaining that no one ever comments on his statuses.

The best part of the movie just might be the soundtrack. Newer songs like 3OH!3’s “My First Kiss” and LMFAO’s “Sexy and I Know It” make some of the worst scenes bearable. Sentimental 90s songs like “Closing Time” by Semisonic and Montell Jordan’s “This Is How We Do It” serve the movie’s nostalgic theme. Thomas Ian Nicholas, who stars as Kevin, also has a song on the soundtrack. Nicholas actually came to CMU in February to perform and promote the release of Reunion.

All of the original cast members reprise their roles and John Cho, Natasha Lyonne and Shannon Elizabeth all have cameos. The movie will appeal to fans of the franchise, but those who are new to the series will most likely be disappointed. There were laughs no doubt, but not as many as expected out of such a popular series.