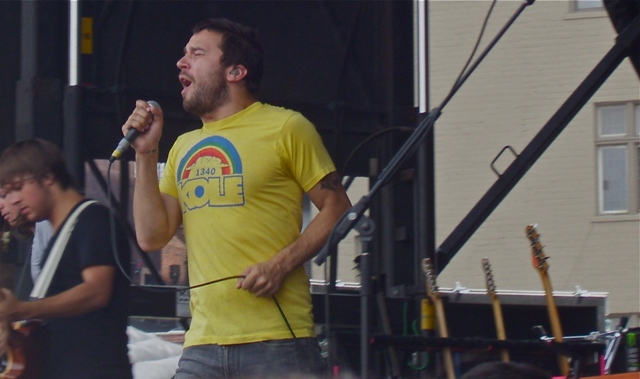 The crowd erupted into cheers as the lights turned all the way down on the weathered plywood stage. As lead singer and sometimes guitarist Max Bemis walked out, the deafening screams enveloped the entire hall. Then as he put his hands up, they knew. This was anarchy.

The Anarchy, My Dear Tour made its tenth stop at Clutch Cargo’s in Pontiac April 5. The 1600 person capacity venue was packed as full as it possibly could in the old cathedral turned nightclub. The tour promoted Say Anything’s fourth studio album, Anarchy, My Dear, which was released March 13.

The Los Angeles based band was far away from home when they stopped at their one scheduled Michigan date. Along with frontman Bemis, Say Anything is made up of guitarist and keyboardist Parker Case, drummer Coby Linder, bassist Adam Siska and guitarists Jake and Jeff Turner.

The band opened their hour-and-a-half long set with “Spidersong,” from their first album, …Is a Real Boy. Throughout the concert, the band played many songs from all of their studio albums and even played “Walk Through Hell,” one of their songs from their Menorah/Mejora EP. Say Anything does something that most bands on an album promotion tour fail to do. The set list consisted of songs from all over their discography.

About halfway through the set, Bemis brought out an acoustic guitar to play “So Good,” a song from their new album. After the song started, the crowd broke into applause as Bemis’s wife, Sherri DuPree-Bemis of Eisley, walked out onto the stage to sing the backing vocals on the song.

Moments after Bemis walked off stage, Say Anything appeared again and played a three song encore including, “Ahh Men,” “Admit It” and “Admit it Again.” “Admit it Again” was a sequel to 2004’s “Admit It” off of …Is a Real Boy. The two songs blended into one to create a great ending to an amazing concert.