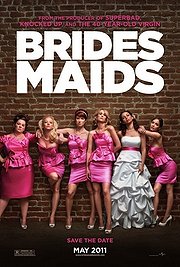 Behold something new in “Bridesmaids.” It’s possible that such an innovation, which is buried beneath a mound of plot cliches and character types, will go unnoticed by the masses. It is simply this: “Bridesmaids” takes pieces of the old genres and makes them new. It is the successful merging of the male-targeted buddy comedy with the female-targeted romantic comedy.

When two genres merge, the film either tends to lean hard on one element or another, but “Bridesmaids” carefully walks the tightrope between both in an effective, hilarious mix.

Thanks to the ad campaign, viewers will be almost immediately forced to draw parallels to the hugely successful 2009 comedy “The Hangover.” It seems like a road movie, with the maid of honor (Kristen Wiig) leading a rambunctious, eccentric group of ladies through increasingly contrived, yet still hilarious series of events. Judd Apatow is involved though, so veterans know to expect a large portion of pathos to go with the gut-busting.

Kristen Wiig, in a turn that deviates from pure comic relief, delivers that emotional appeal. Her performance is one of comedic excellence as well as grounded in some sort of humanity. She can take you from a hilariously over-the-top drug trip on an airplane to a beautifully subtle montage of her baking a solitary cupcake that appears to be for someone, and then eating it herself.

Wiig plays Annie, a baker who has lost her bakery as well as a woman stuck in neutral while her best friend (Maya Rudolph) is getting engaged. That friendship is the primary relationship at “Bridesmaids‘” core, though the other bridesmaids build a comedic wall around it. They consist of four women (Ellie Kempmer, Rose Byrne, Wendi McLendon-Covey, and Melissa McCarthy) who each represent a different type of woman, none of which is easily defined.

It is in that principle that “Bridesmaids” becomes an oasis for both females and laugh-seekers. The cheap gags are not gone, but they are delivered full-on by a female ensemble who refuses to blink in a largely male-dominated genre. They go through all of the wedding paces- dress shopping, bachelorette party, bridal shower- but with a hefty amount of yuks and one-liners. Paul Feig, working with a script by Wiig and Annie Mumolo, doesn’t shy away from the grotesque. The dress shopping features a disgustingly hilarious bout of food poisoning, and McCarthy’s bridesmaid continuously cracks fart jokes normally reserved for her male counterparts.

“Bridesmaids” works because of its unflinching meshing of genres and embedding of typical buddy film staples into an all-female cast. Feig and his cast don’t want you to think about the women at the center, they just want you to laugh your ass off. By ignoring gender and just going straight for the kill, the issue surfaces because of its absence. In a way, it does for the buddy comedy what Thelma and Louise did for the road movie. It may not be as stylistically competent, but time will tell its relevance in that respect.

The yuks and the pathos merge to an extent that exceeds films like “The Hangover,” whose comedy is grounded in the same territory but with a pinch of sexism. “Bridesmaids” has the fortune of being produced by comedy mainstay Judd Apatow and stars a cast of characters that have elements of realism but are all recognizably fictional. The movie does sometimes lean too heavily on the predictable, forced love story when it could be giving the audience more bang for its hilarious buck with the bridesmaids’ interaction, but it mostly balances the romantic with comedic as well as any Apatow-directed film.

Audiences may not respond well to “Bridesmaids” simply because it is marketed as a female-led gross-out comedy instead of a melding of genres. It would be good for people who enjoyed “The Hangover” to see this movie, and perhaps realize that women can actually do comedy just as well as men. It’s a principle that may seem shocking to have to type out, but Hollywood insists with almost every summer comedy that this isn’t true, that women just can’t draw laughs. Feig, Wiig, and company have just challenged them to sit in their seats as a group of women expel the same vomit and shit as the men and then try not to laugh.