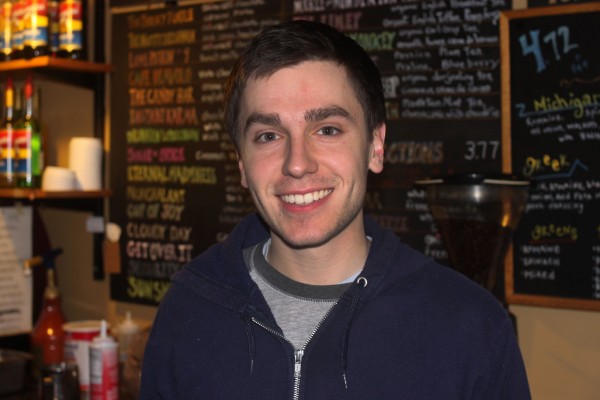 It’s no secret that Mount Pleasant is lacking in live music. Open Mic Night at Kaya Coffee House has been one of the few saviors for this ongoing problem for years. Every Wednesday night for three hours, six local artists provide a release from the chaos we call college for their friends and fans.

Sean Stout, a regular from Beaverton, has been performing on and off for about four years now.

“It’s a fun environment and I just like to play my favorite songs,” he says.

This is the sort of environment that keeps people coming back to Kaya.

Kaya isn’t a place that anyone feels pressured at when they play and individuals who attend Open Mic Night are usually there because they just want to hear music. The coffee house acts as a getaway in the midst of all the competition that exists in the music industries today.

“Kaya has a very unique atmosphere. It’s not a bar; you don’t have to worry about drunk people,” Heisler said.

The atmosphere seems to be what everyone was talking about. Regular performers as well as listeners are common at Open Mic, but new acts are always encouraged. Heisler appreciates the people that come back every week, but also wishes there was more diversity among performers.

Manager and Remus senior Elly Cotton would like to see other acts in addition to musical performances at Kaya.

“There used to be stand-up comedy,” Cotton said. “One guy used to perform The Phantom of the Opera — people not just playing — it would be cool if there would be more of that.”

Andrew Price, a Brighton senior and employee at Kaya, has been playing open mic and other acoustic acts around Mount Pleasant for years now.

The coffee house gives a welcoming vibe to anyone with new and different talents. Regulars are valued as highly as newcomers, a feeling that Gladwin sophomore Evan Knill experienced when he played Open Mic Night for the first time on Jan. 25.

“This was my first time ever playing in front of people, and I’m coming back next week,” said Knill, a newly recruited performer.

Knill admitted being nervous at first, but eventually became comfortable and enjoyed the feel of playing in front of a crowd.

But it’s not just the comfy atmosphere that keeps Cotton loving Open Mic Night — it’s the community that the atmosphere can induce.

“It’s an easy way to get music into the community but also to have local musicians who don’t necessarily have record labels or are touring to play around and experience how it is to be in front of a crowd,” Cotton said.

Kaya is a place for people to jump-start their musical careers and gain valuable experience all the while playing in a supportive environment.

Music is an important part of everyday life and Open Mic goers and performers understand this.

“It makes everyone in that moment of time there listening to that; kind of how like music enchants you in a way, makes you right there,” Cotton said.