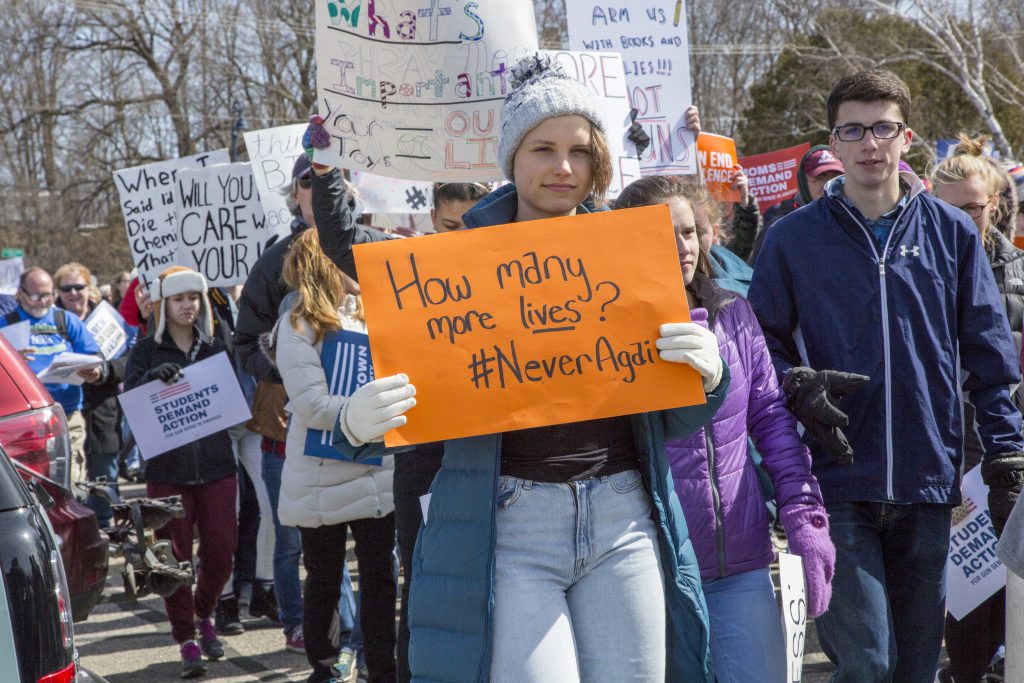 Despite the cold and wind, there were around 700 people who showed up for the March For Our Lives event that took place in Mount Pleasant. From children in strollers to adults with walkers, a wide range of people with diverse backgrounds came to support the march that was organized by Central Michigan University students.

March For Our Lives is a worldwide event that took place Saturday, March 24. In Mount Pleasant, the march began at 2 p.m. at Island Park then looped around to the Mount Pleasant City Hall building.

Arrival for the march began at 1 p.m., where the organizers asked participants to sign a waiver to relinquish the fault if anything happened during the march. Tables were set up for Moms Demand Action, League of Women Voters and Promote the Vote.

Moms Demand Action, or Moms Demand Action For Gun Sense in America, were handing out fliers about bills that are currently in legislation, like the Red Flag Law. The Red Flag Law is a policy that empowers family members and law enforcement to seek an Extreme Risk Protection Order— a court order temporarily restricting a person’s access to guns when they pose a danger to self or others. They were informing people in attendance of the march and then asking them to write postcards to their legislators about these bills. They were also giving out free signs to carry during the march, with some that said “Students Demand Action.”

The League of Women Voters were helping participants register to vote if they weren’t already.

Promote the Vote had a petition for participants to sign, a petition to amend the Michigan Constitution to create fair rules that remove barriers and make voting more secure.

During the time waiting for the march to begin, the organizers reminded all of the participants about march etiquette, on how to act if counter protests showed up and to stay in the right lane on the streets the march took place.

Mayor Allison Quast-Lents and Sara Spencer-Noggle, who is running for Isabella County probate judge, gave speeches showing their support before the march.

During the march, chants rang out in Mount Pleasant for the town to hear— chants like, “no justice, no peace,” “NRA stop it, people over profit,” “never again” and “this is what democracy looks like.”

There were many signs, held by varying ages of participants— signs that read, “It’s easier to buy guns than my education,” “Lock Down Guns, Not Kids,” “Jesus would be pissed” and “Invest in our kids, not the NRA.”

James Shoup, who was attending the march in support of Dion Adams who is running for congress, said “I’m very proud of our young people here. I’m very proud to be here to support these kids. They’re accomplishing things we never did.”

While participating in the march and chants, Shoup struck up conversations with those around him. He told those around him that weren’t chanting, “just your presence is loud enough.”

J. Cherie Strachan, a Political Science and Public Administration professor, was also in attendance of the march with her family. Strachan said it is important to practice and hone in the skills of organizing these types of movements, which is why she runs the Democracy in Action project at CMU.

Students enrolled in Political Science 105, Intro to American Government and Politics, participate in discussion groups and apply what they’re learning in the class to a current political issue facing our nation. This year was immigration, Strachan said next year it will be about guns.

Strachan said the point of the project is to show students how they can create change and organize movements, just like this one.

“It is hard work, but not impossible,” Strachan said. “It requires time and energy.”

When marchers arrived at Mount Pleasant City Hall, they were directed to sit on a grassy hill next to the building to listen to more speeches. The people who spoke were Kali Fox – who was representing Debbie Stabenow, CMU history professor Mitchel K. Hall, Allan Riggs for Moms Demand Action, the president of League of Women Voters Lara Raisiaer and Father Wayne Nicholson from the St. Johns Episcopal Church.

The consensus of all of the speeches made at the March For Our Lives event was best said by Lara Raisiaer, “Your vote is your voice.”

An open forum, allowing participants to voice their own opinions, began after the speeches wrapped up.