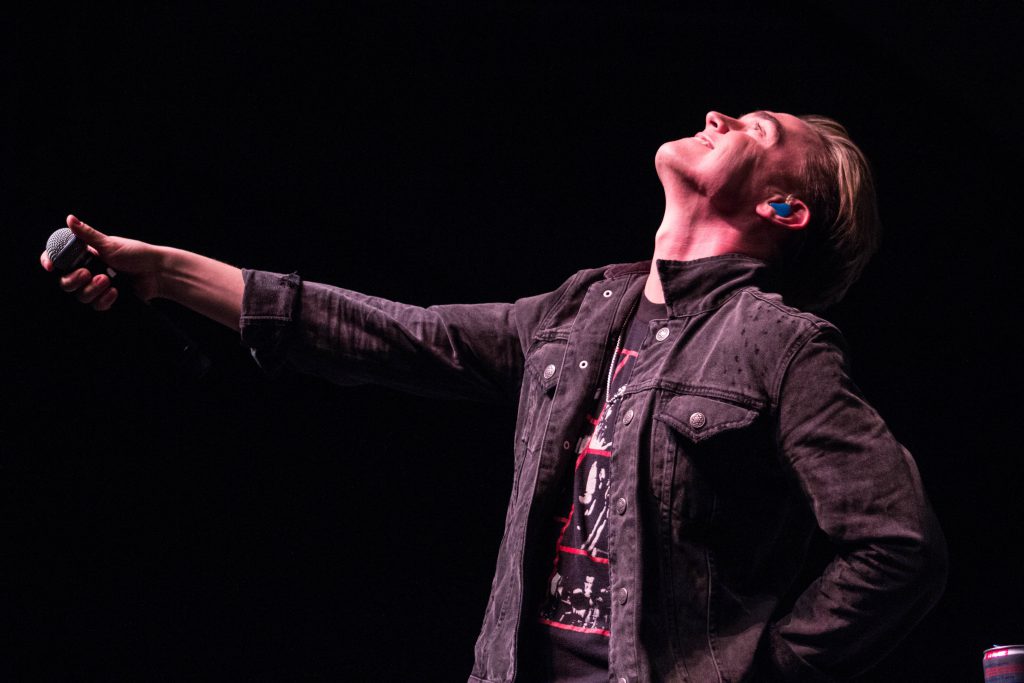 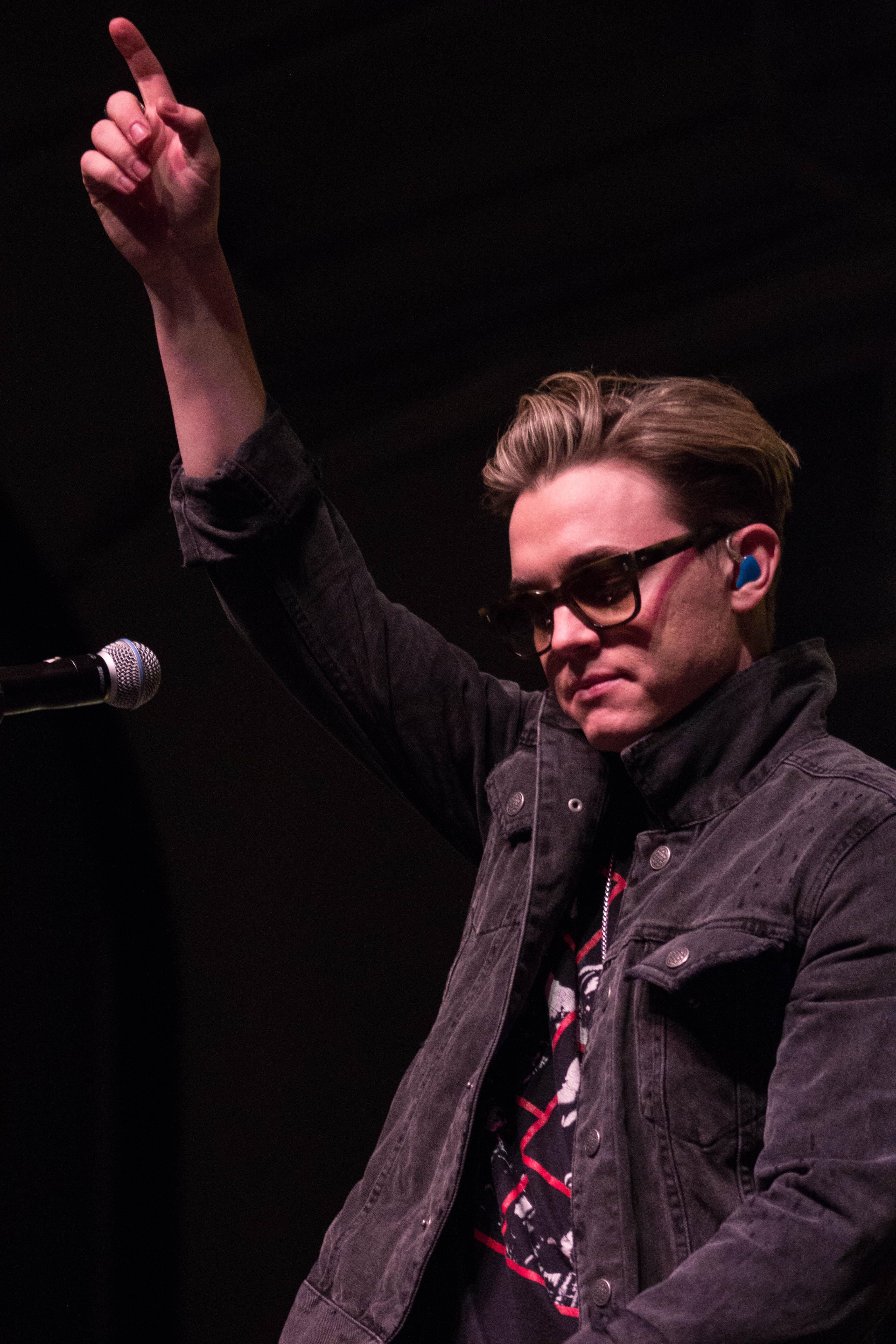 Imagine you’re 10 years old, lying on your shag carpet, listening to the radio when all of a sudden “Beautiful Soul” by Jesse McCartney comes on. Suddenly you’re on your feet singing the words at the top of your lungs in the middle of Finch Fieldhouse with hundreds of other fans.

That ultimate nostalgia experience is what Central Michigan University students and fans witnessed Thursday night at the Jesse McCartney concert.

The three-man-band PUBLIC opened for McCartney with original songs and covers of early 2000s throwbacks like “Since U Been Gone,” originally by Kelly Clarkson, and an alternative rock rendition of “Toxic,” originally by Britney Spears. The band expressed that it was one of their favorite compositions. There was hardly a moment during their set that music wasn’t playing. 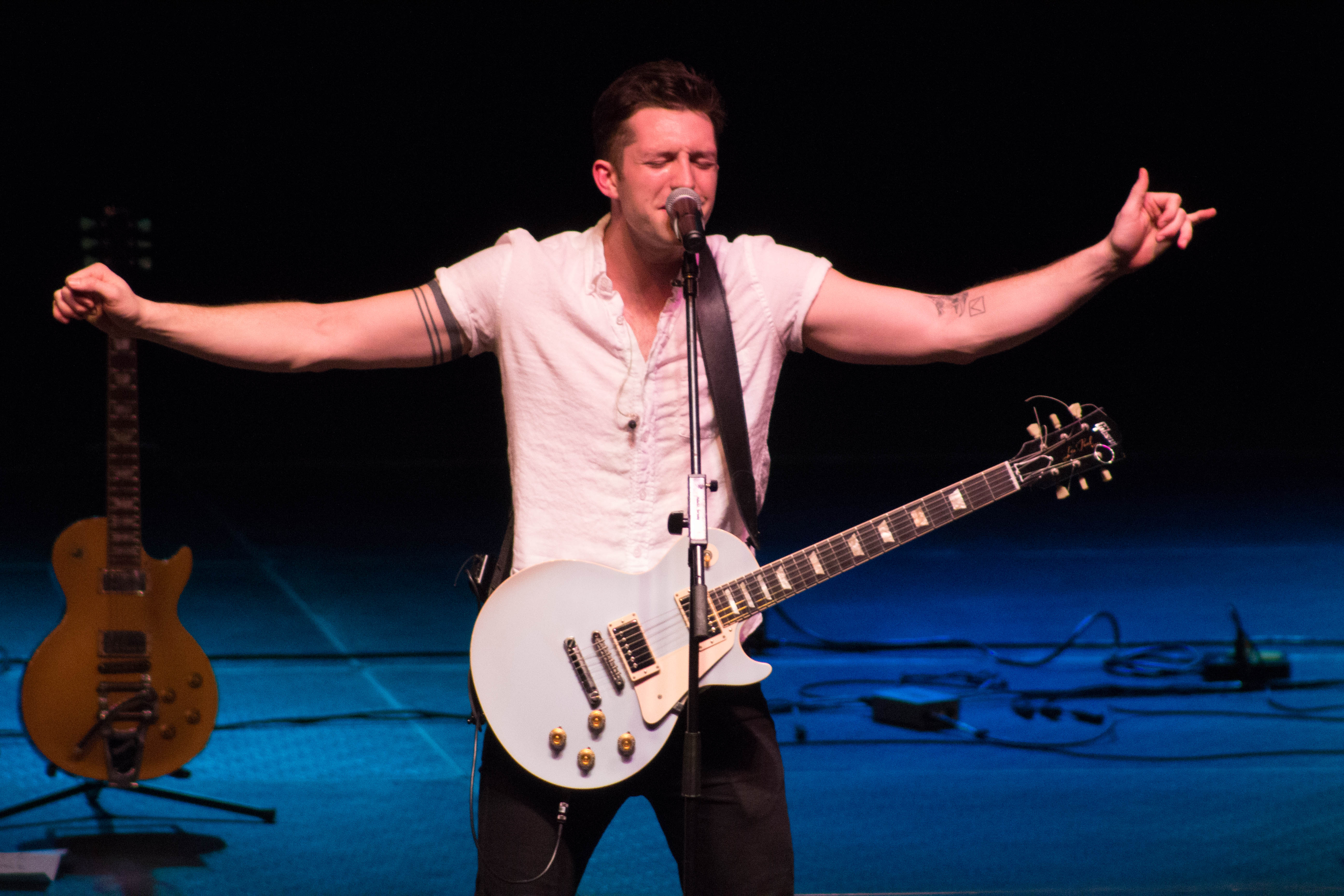 At the end of PUBLIC’s performance they turned on the lights to get a better look at the crowd and took a selfie with them before walking off stage.

Sitting to the right of the stage in a wheelchair was Toledo junior Allana Sparks. She held a sign that read, “I might have had brain surgery three weeks ago, but I still know all the words.” Sparks’ surgery took place in order to remove a cyst that took up almost the entire left side of her brain, costing her eyesight in one eye. Her expected recovery will take three to four months, but that didn’t stop Sparks from making her way to see her idol two days after being released from the hospital.

“I got tickets in January. When I found out that I was going to have surgery I was very determined to make it back to this concert,” Sparks said. “I would definitely say that Jesse McCartney motivated me. I’ve loved him since I was little. He’s the one artist that I can remember liking throughout my entire life.”

Sparks was thrilled that the show was mainly an acoustic concert because she suffers from frequent headaches. She was most excited to hear one of McCartney’s most beloved songs, “Beautiful Soul.” And her excitement was not in vain.

Not only did McCartney perform his hit “Beautiful Soul,” but he also invited Sparks up on stage to serenade her. McCartney walked her to the middle of the stage and had her sit on a stool.

“How are you doing Allana?” he asked.

“These next few moments are for you and I,” McCartney said to her.

McCartney began singing his song “The Stupid Things” and even incorporated Sparks’ name into the lyrics. “No doubt that Allana is from Venus now,” McCartney sang. By the end of the song McCartney was kneeling in front of Sparks with her hands in his as they shared those last few moments together. Before walking her off stage, McCartney hugged her tight.

It didn’t take long for him to get right back to giving the crowd his full attention as he jumped into his 2008 hit, “Body Language.”

Some students arrived four hours early to the show for meet and greets with McCartney and to get good spots in the field house before the show.

Sophomore Catherine Young came to see McCartney to fulfill her childhood dream of seeing him perform live in concert.

Students weren’t the only fans in the crowd that night. Parents, and children as young as eight years old stood in the midst of the crowd. One such eight-year-old was Kendall Cline from Shepard. She wanted to come to the concert because her favorite song is “Shake,” by McCartney.

McCartney, now 30, debuted his first solo album “Beautiful Soul,” that was released back in 2004. While that may have been the start of McCartney’s solo music career he had been in the acting business since 1990 with his first appearance on the daytime television drama “All My Children.” He went on to act in other television shows and made multiple appearances on Disney shows as well.

But if you’re not a fan of McCartney’s acting or singing, you might recognize his voice as that of Robin from “Young Justice” or as Roxas and Ventus from the video game “Kingdom Hearts.”