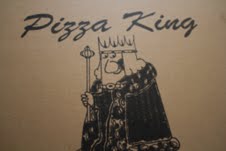 The most recent A Pleasant Slice spotlight shines on Pizza King.

Located on South Mission, Pizza King offers both pick-up and delivery options. However, they are not open very late, so don’t expect to fix your late-night cravings here.

I chose the delivery route and was told that my pie would arrive in 25-30 minutes, which seemed reasonable. The pizza was indeed delivered in just 24 minutes, so the experience started out on the right foot.

When I opened the box I was a bit disappointed. The pizza didn’t appear to be anything special. In fact, I’ve seen better looking frozen pizzas. Nevertheless, you cannot judge a book by its cover.

I began the consumption process, and the first bite definitely wasn’t anything to write home about. The dough was very dry and the cheese had that classic, not fresh, plastic texture to it.

As I proceeded down the slice toward the crust, the taste of the sauce became apparent —it wasn’t very good. It was oddly spiced and, like the dough, rather dry.

The pepperoni was abundant and had respectable flavor, but it didn’t stand out. It seemed to be hidden among the spice of the sauce and dry dough taste that consumed each and every bite.

There are some crusts that you savor, and then there are some that you have to wash down with whatever beverage you’re sipping. Pizza King’s crust doesn’t fit either of these categories because I couldn’t even eat it. It was as dry as crushed concrete on a summer day and lacked any flavor whatsoever.

Pizza King’s pizza was delivered on time, but following my eating experience, I almost wish they never had brought it to me at all. The pepperoni was the only bright spot of this pie.

This pizza was not at all filling, and was rather pathetic as a whole. A frozen pizza would have done the job, and for a much lower price. This pizza is light years away from the “king” of the area, in fact, I’d call it “the jester.”

I give Pizza King’s pizza 1 out of 5 slices.