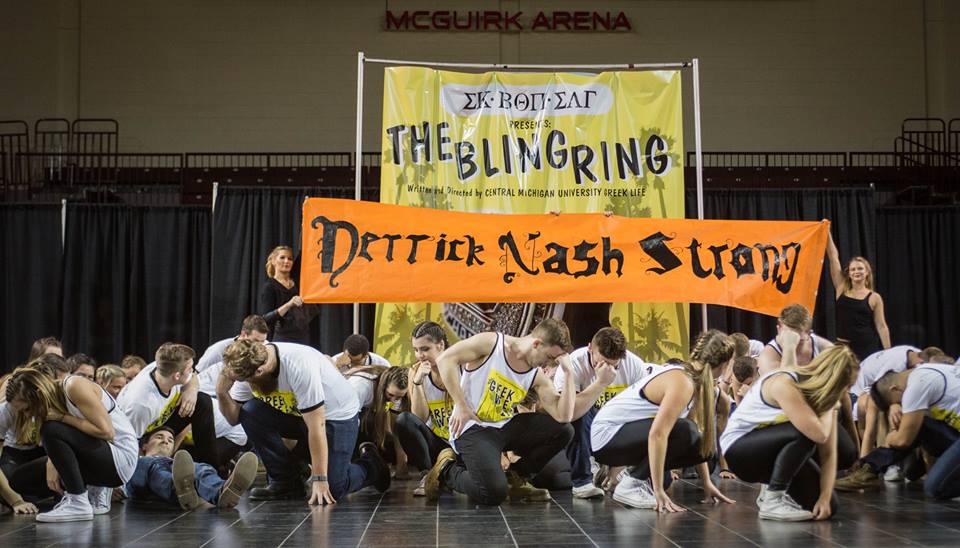 Each year, Greek Life at Central Michigan University works together to raise money for a different philanthropy, helping several people in the process.

Last week, the Greek community put all their efforts together to raise money and awareness for the Derrick Nash Strong Foundation. The foundation was created to honor Central Michigan football player, Derrick Nash, who lost his battle with leukemia in June, 2015.

The Derrick Nash Strong Foundation, a nonprofit created by his mother, raises funds for families so parents can stay with their sick children in the hospitals without worrying about financial commitments.

For the past two months, 11 teams for 31 Greek organizations have been working to raise money on their go fund me pages and continuously promoting the week-long philanthropy and the foundation. The week long event started last Sunday, April 10, and ended Saturday, April 16, at the spring football game.

While Greek Week is a competition between the community to see who can gather the most points throughout the week, the most important part of the week was raising money to contribute to the Derrick Nash Strong Foundation and remembering the legacy he was able to leave at CMU.

According to junior and Alpha Sigma Alpha member Sarah Cramer, this week is important for the whole Greek community.

“It’s the one time of the year that really connects the Greek community to one another,” Cramer said. “We come together for a common goal and that is to make a difference to the philanthropy we choose. It shows people in the community that is Greek are more than just parties, tailgates and wearing letters.”

Although past philanthropies have been important, Cramer believes that this philanthropy is especially important for the whole community.

Sophomore Dimitra Niotis participated in Greek Week for the second time this year and loves what the Greek community can do during the week.

“Greek week is a week where all the fraternities, sororities and multicultural organizations get together to unite for a week to help a philanthropy and create strong ties at the same time,” Niotis said. “It’s important because we contribute back to our community and help those who need it the most. This year, we were able to honor a fellow Chippewa.”

Wednesday, April 13, businesses including Insomnia Cookies, La Senoritas, Panda Express and Tropical smoothie participated in a local business day, where donations from purchases were made on behalf of the foundation.

From noon to 4 p.m. on Thursday, April 14, Greek members spent the day participating in community service events for Service Day. While the foundation is the biggest part of Greek Week, Greek life still works to benefit people in other ways by helping out with Girls on the Run crafts, making tie blankets, writing notes of positivity and passing out pamphlets, were just a few events the community helped with.

Sophomore Allie Marsh from Delta Phi Epsilon was able to participate in her first Greek week this year.

“During the week you’re able to  get so much closer with the greek community,” Marsh said. “You get closer to your sisters and the brothers of the fraternity and brothers/sisters of the multicultural fraternity/sorority you’re paired with. We put so much effort into raising money for an amazing cause that really changes people’s lives.”

Marsh said the foundation that was supported does so much to change the lives of others who are affected by disease and illnesses.

“This foundation is important because it not only supports a Central Michigan University student who passed away from leukemia, but it supports families whose children also have an illness,” Marsh said. “For me, the best part about Greek Week was getting closer to my sisters that I haven’t had a chance to get close to before and getting closer to the brothers of Pi Kappa Phi. Overall, we just had a really great time working together throughout the week.”

The week ended with a mock rock competition, where 11 teams choreographed dances to compete for one final time during the week. The theme for the dances this year was Movie Soundtracks, and ranged from songs from “Grease” to “Step up” to “The Neighbors.” Rehearsals began Sunday night and ranged between the times of 8 p.m. and 1 a.m., where members had a week to learn and perfect a whole entire routine to perform in front of the whole Greek Community, spectators and judges.

After raising a little more than $50,000 for the Angel Wings Foundation last year, the Greek community set the goal to raise $55,000 for the Derrick Nash Foundation. The community exceeded their goal by raising $67,577, presenting the check at CMU’s spring football game, to help the families who are in need and want to care for their children.

“The best part of Greek Week is seeing the reaction of Derrick’s mom when the total amount raised was announced at the football spring game,” Cramer said. “It made all of the hard work, sleepless nights, and busy schedules worth it.”