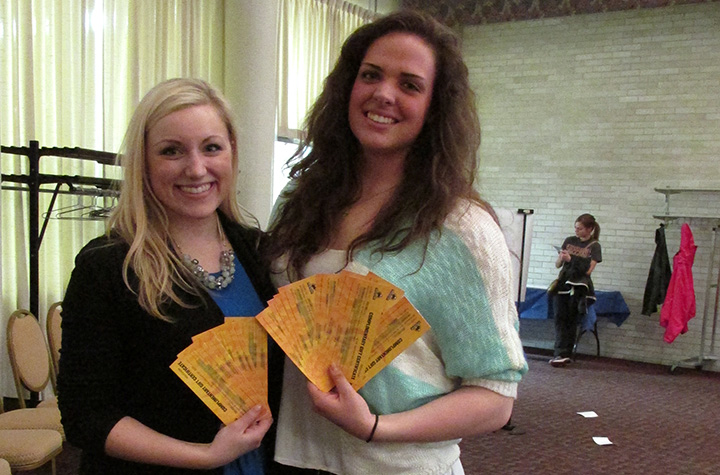 Twenty five teams of two filled the University Center Rotunda Wednesday, eagerly anticipating what the sixty second showdown had in store for them.

Inside the Rotunda, there was an arrangement of tables where two groups were assigned to one table and a video was set up to show the participants how each challenge was to be played. The team who finished the challenge the fastest received ten points, while second place would receive five points and third place three points. All proceeds for this event would go to the Listening Ear Crisis Center, a center supporting homeless youth in Mount Pleasant.

“Shake your junk was fun,” Sholander said. “I may have to use those moves at Wayside.”

Other participants, such as senior Kristen Miller, deemed “shake your junk” the most difficult.

“The most challenging event for me would be the ‘shake your junk’ event,” Miller said. “Trying to get those ping pong balls out of the Kleenex box while being tied around from behind was difficult, I tried jumping around each and every way until they fell out and Maria could catch them.”

Participants would not leave the event empty handed. For each game that they won, they would receive prizes such as a T-shirt. Everyone was competing for the grand prize which was a $50 gift card to Buffalo Wild Wings, given to the overall winners of the sixty second showdown. Maria Haugen and Kristen Miller were the winners, showing great team work and chemistry together.

Haugen loved the event and the liveliness that came with it.

“I loved the concept and energy,” Haugen said. “I think this event ran incredibly well.”

Miller also loved the event and the cause it was benefiting.

“I thought this was a wonderful event,” Miller said. “It made it even more exciting knowing that it was benefiting such a great cause for the nonprofit organization Listening Ear, I think the group did a great job.”

Emily Kerschen, one of the event organizers, hoped the participants got more information about the Listening Ear Crisis Center from attending this event.

“We hope they get a lot more information about Listening Ear because it is a local charity so we hope that’s what they take away from it,” Kerschen said. “We hope they enjoyed it and come back to other ones in the future.”