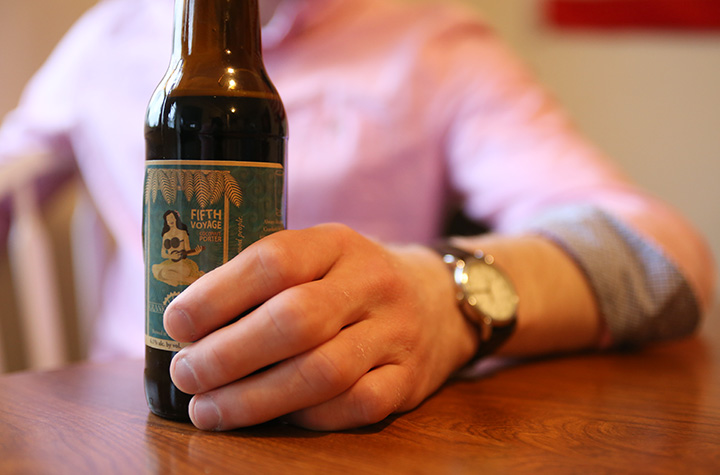 Sometimes, two things that should never be put together are done so with great success. It’s always a marvel when it’s pulled off, a great feat of daring and cleverness.

Coconut and beer are such a pairing. This week’s beer makes a bold attempt to mold these two, and fails. The pairing is not good. In fact, if I were on a ship in the middle of the ocean and all I had to drink were this beer, I’d start drinking seawater. No — better yet, I’d dive off the boat and swim as far away as I could before the sharks got to me.

Cranker’s Brewery in Big Rapids presents a beer that smells like lotion and tastes exactly how I imagine a beer and lotion mixture tasting. Drinking this beer, I could hardly overcome the urge to dump it all over myself in hopes that it would protect me from the sun or keep my skin from desiccating.

Am I being too harsh? To be fair, I don’t like coconut. But it’s not just me. The other four people who tasted it were similarly repelled, and expressed surprise that I finished the whole bottle. (I don’t let beer I paid money for go to waste.)

About the only bit of pleasure I derived from this beer was in imagining how it was made. The reason for the coconut being so overpowering, I concluded, was because there was a terrible accident in the brewery, with a giant vat of coconut milk exploding and saturating the walls equipment with the stuff that the  brewers could never get the taste out.

That scenario removes some of the fault from the beer’s creators: they let a tainted product be bottled and sold, but it would be too expensive to move locations (the old location has obviously been damaged beyond repair, because the place can’t be used now for anything than maybe a warehouse for storing coconuts), so they have to cope the best they can.