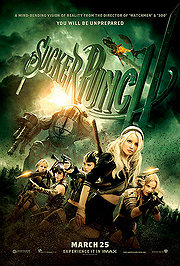 Remakes and graphic novel adaptations are Zack Snyder‘s MO. Lately though, with last year’s “Legend of the Guardians” and now “Sucker Punch,” he’s decided to take his over-stylized style off of the comic book page and map out novels or original material into his own wild odyssey.

“Sucker Punch” has Snyder’s name all over it from the get-go. It begins with a violent slow-motion sequence of a young girl (Emily Browning) accidentally shooting her sister when she was aiming for her wicked stepfather and then being brought to a mental hospital where she will await her lobotomy.

For the first 30 minutes of the movie, she hardly says a word. In a way, this perfectly sums up Snyder as a filmmaker. He’s more concerned with sweeping images- storming the medieval castle in a vintage airplane to slay orcs with machine guns – than he is with petty words. In other words, he’s Michael Bay with more imagination.

To say Snyder faired better in adapting other people’s material would be misguided, because those attempts have also been hit (“Dawn of the Dead“) and miss (“Watchmen“). He tries to create a feminist fable with sexed-up vixens wielding machine guns here, but it becomes more his wet-dream than empowerment. He beats the hell out of them, and then kills most of them. Hollywood needs to learn that empowering women isn’t giving them a gun and sass, but actually making them into people.

To be fair, no character in “Sucker Punch” feels human. As the girl, coyly nicknamed Baby Doll, retreats to fantasy while we’re led to think she’s doing masterful dancing in the real world, the movie and the director go insane.

Doing Snyder’s maniacal dance of slo-mo death is a well-sculpted but ultimately disappointing acting ensemble. Browning is tolerable in the main role, but it’s Abbie Cornish, whose bright star continues to rise, that is the real talent. Toward the end, she brings a surprising emotional gravity to a death scene that otherwise would’ve felt exploitative.

The other actresses are largely forgettable. You’ll recognize Vanessa Hudgens trying to escape the confines of High School Musical and you’ll see “Mad Men‘s” Jon Hamm for about three minutes and wonder why he’s even there, but other than that they wash over you without any real impact.

Like “300” before it, “Sucker Punch” could’ve been about 25 minutes shorter without the slow-motion. It has the added element of fantasy sequences, though, so you could subtract another 25. Baby Doll hatches a plan with the other locked up girls to bust out. She’ll dance to distract guards, and they’ll obtain items necessary for escape. When she dances, that’s when she goes into dream-land, and on four video-game-esque missions with her team.

Each of these sequences plays out like “Scott Pilgrim vs. the World” on even more crack. We see them rush through a WWII battlefield and shoot soldiers that gush smoke instead of blood, and we watch them rush up to a train in a helicopter to dismantle a bomb. All of this is shot in Snyder-vision, who amps up the body pile without ever really raising the stakes. By the last third he seems to realize that for this struggle to mean anything, he has to start killing people. This makes it even worse, and though it’s unintentional, the deaths seem like a payoff for sitting through the mundane PG-13 violence in the rest of the movie.

That all could have been avoided if Snyder wasn’t so concerned with constantly embedding us in his wicked imagery. “Style over substance,” is a calling card that many a studio system director answers to. Michael Mann is one of the few who uses that technique to actually say something, but Snyder continues in his own direction. The surface of “Sucker Punch” is so finely polished and played with an amazing soundtrack that you almost forget that there’s hardly anything there. It’s a parlor trick disguised as a magic show.