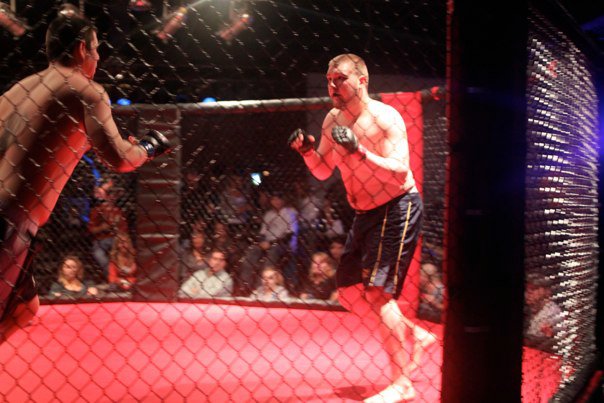 Mixed martial arts are gaining popularity in Isabella County and heavyweight Cody Collin is becoming a big name amongst the most popular fighters around the area.

With a record of 3-1, the 6-foot-2, 250-pound fighter became the number one contender by defeating Jeffery Carpenter by submission on March 21.

Collin will fight Devin Brown for the heavyweight championship in either late April or early May. The fight is scheduled to take place at Wayside Central, located at 2000 South Mission Street.

The championship fight is an important opportunity for the 19-year-old. It will be Collin’s first fight in front of a large crowd with title implications.

The fight could be a challenge for a big kid; at least “big” is how his coach describes him.

“Cody is a big kid,” Chris Pennell said. “But he’s tough and he can move well in the cage.”

Collin is the founder and captain of Team Crazies, a new fighting club that originated at Timber Creek Apartments. He started the club with his friends Logan Martinez, Thomas Hayter, Andy Beals, Jake Embrey and Jaremy Mount.

Collin has a boxing background and wanted to continue a combat based sport, eventually deciding to commit to mixed martial arts. While searching for an MMA coach, he found one person he never believed to know anything about fighting—his landlord.

Pennell was a kick boxer during his youth and knew the basics about combat. He wasn’t an expert on MMA but he knew just enough to get Collin started.

“I told Cody if he wants to get better, he will have to get well rounded,” Pennell said. “Finding different coaches can give fighters different tactics on how to fight.”

Colin did just that, finding two different ways to fight under one roof. Daniel Lenhart from Unleashed MMA and Fernando Martinez (former coach) from K.O. Boxing both received phone calls from the eager fighter.

He later met up with both coaches at Morey Courts, located at 5175 East Remus Road. Lenhart and Martinez were both impressed with Collin’s drive.

“Cody came to me asking for help and I couldn’t say no,” Martinez said. “Why not help a good fighter who’s willing to put in the work?”

Along with the evening boxing workout done in the Timber Creek multi-purpose room, Collin packs up and heads to Morey Courts everyday to workout with Lenhart.

“The workouts are so tough,” Collin said. “I don’t know how I do it but I have to find a way to survive the workout each time.”

With a championship and a reputation on the line, Collin said that he has something to prove to his peers and family.

Growing up without his parents and being raised by another family, Collin wants to show that he can be a positive light despite negative conditions.

“I can do something great in my life and this is what I am going to do,” Collin said. “I can really go somewhere with my fighting.”

Through his rough upbringing, Collin manages to keep smiling and bringing joy to others.

“Along with fighting, I am just trying to enjoy life with my friends and family,” Collin said.