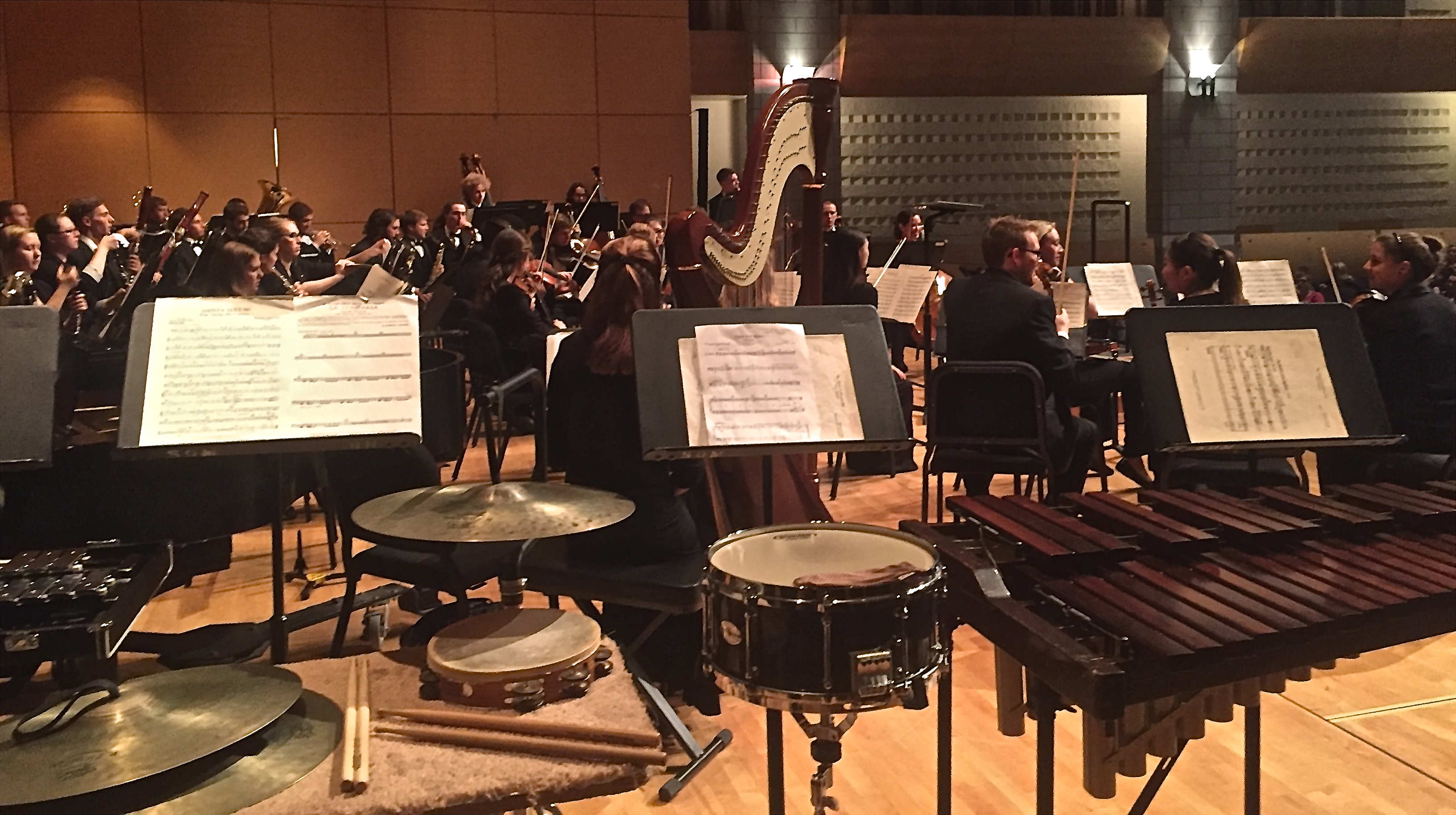 Vibrato filled the air as the string section tore their bows across the tops of their instruments and the horns played intense bursts. Music erupted during the second movement of The Three Cornered Hat Manuel de Falla piece, titled “The Miller’s Dance.”

The concert, which took place Thursday in the Staples Family Music Hall at 7:30 p.m., featured six pieces performed by this season’s symphony orchestra. The Three Cornered Hat was the centerpiece of the concert’s second half during a cultural night in the symphony orchestra. Many students struggled with the intricacies of the music and its reliance on technical skill.

“As principal I set the style of the trumpet section to fit the rest of the ensemble,” Mount Pleasant junior Zakariya Sadir said. “The third movement of The Three Cornered Hat has a lot of weird things happening and a lot of individual trumpet pieces happening. A lot of times I’m playing something different then the others around me, which makes practicing it very difficult. But we all played well and I was proud of our section.”

Dr. Maria Chouza-Calo, professor of Spanish, introduced The Three Cornered Hat to the audience with information about the story each movement portrays. The Three Cornered Hat is part of a ballet originally performed in Spain, the piece is specifically about a Miller who ends up being imprisoned and getting in a dual with the Governor of the land, over an assumed infidelity with his (Miller’s) wife. The piece ends with a Jota,which is a dance of resolution or celebration showing that the Governor and Miller have found peace.

“It is important to understand how Spaniards dance to this music,” Chouza-Calo said. “Each dance in Spain, where I’m from, has a purpose. The first instance of the Farruca (type of Flamenco dance) being danced was in the late 1700’s and its originally a male dance. But the sounds the orchestra plays are not strictly Farruca – it tells a story.”

The first movement, Dance of the Neighbors, is a seguidillas, a calmer dance in triple time that sets up the turmoil of the rest of the piece.

“My solo in the first movement of the de Falla was so intense for me,” Gozde Gakir, a flutist and grad student from Turkey said. “I like Spanish melodies, there’s nothing specific about it I enjoy, but the Spanish and Middle Eastern music uses percussion and the rhythm makes me excited.”

Some students were involved with the pieces from every faucet. Joshua Hoffman, Hudsonville senior, played both the violin and viola for this concert during the first half, which included a Bach and sting heavy pieces, he played the viola. For the second half, where two Afro-Cuban dances and The Three Cornered Hat were performed, he was tasked with switching sections and play the violin.

“I didn’t realize how different playing both instruments would be,” Hoffman said. “Its great being in both sections and hearing the pieces from both sections. Because the violins play melody mostly and in the viola section I got to hear more notes and part of the pieces I don’t normally hear.”

Overall, the concert was a cultural experience, filled with music belonging to Latin and Cuban heritage while also respectfully tipping their hats to Johann Sebastian Bach, who was born 330-years-ago.

“The concert was excellent. There is always this adrenaline and this great spirit, they rise somehow and once you are there, its like they (the audience) are involved in it so much and you can feel it,” Conductor Jose-Luis Maurtua said. “The most exciting and most energetic was the de Falla, the final dance. But after that it was hard for me to control myself with the Bach, with the strings, during the encore. It was such a contrasting mood. And I was still high from the music and I needed to come down.”