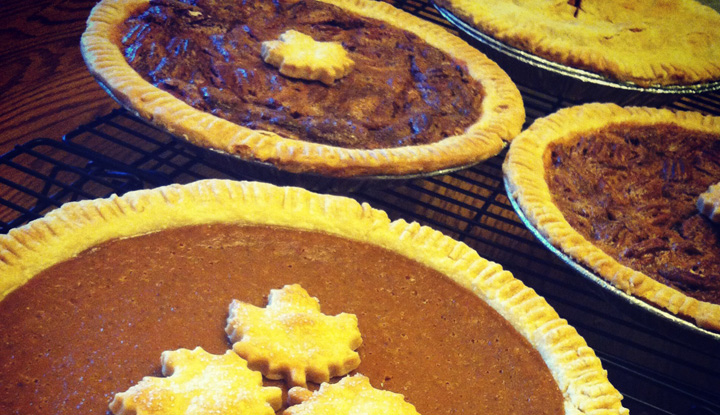 The holidays have arrived, which means one thing: it’s pie season.

While the traditional pumpkin pie or sweet potato pie are both equally delicious, we should really give some other pies a chance to shine this season at the dinner table.

Ahhh, the apple crisp — a distant relative of the all-American apple pie. The apple crisp made this list because it is a different take on an apple pie. Apple pies are one of the most popular pies in the United States but the apple crisp is a contender it is own right. What is the difference between the two? A crisp generally incorporates strudel on top to give the pie a crisp, buttery crust, instead of the traditional piecrust.

Want to give it a go? Here is a good recipe for apple crisp pie.

Good old Mississippi Mud pie. It is a chocolate-based pie that is thought to have originated in Mississippi (the name doesn’t give it away after all). If you haven’t had the pleasure of trying this pie, you need to get yourself a slice soon. It typically has a crumbly chocolate crust, is drizzled with chocolate syrup and served up with a scoop of ice cream.

Want to try this southern treat? Here’s a recipe for you!

Banana cream pie is the first of the cream pies on this list and it makes our list for good reason. First of all, it is super easy to make and secondly, it tastes amazing. It’s a pie typically made of custard or pie filling and topped with a whipped topping. The MVP of this pie? Sliced bananas, of course.

Calling all peppermint lovers! This is the pie for you. Grasshopper pie is usually made of an Oreo cookie piecrust and a mint pie filling. This pie is a Christmas tradition in my family but there is no reason why it can’t be enjoyed during Thanksgiving, too! After all, who doesn’t love the combination of chocolate and mint?

The Pioneer Woman has a great one here.

There is nothing more irresistible than toasted coconut? I think not! Coconut doesn’t have to be just reserved for summer time, coconut cream pie would be a great addition to the Thanksgiving table this year. Like most cream pies this one is usually made with a custard or pudding filling. What sets this pie apart is the toasted coconut, of course!

While strawberries aren’t exactly in season during this time of year it is a different take on the more traditional cherry or blueberry pies that are pretty common holiday favorites. If you are a fan of strawberry shortcake, you’ll love this pie. There are as many different versions of this pie as there are apple or cherry pies but they typically include a graham cracker crust and whipped topping.

If strawberries are your thing, here is a delicious looking version of strawberry pie.

Chocolate pudding pie is my family’s Thanksgiving pie of choice. It is the first pie at our dinner table that is eaten up first and it is the pie we all look forward to every year. It is exactly what it sounds like; a pie made out of chocolate pudding with an Oreo cooking or graham cracker crust and whipped topping.

If you’d like to try my family’s top-secret recipe, head over here.

This pie is actually a cake but it is so delicious that we are going to overlook its cake status and just go by its name to include it as number five on this list. Boston cream pie is a cake with a custard filling that is topped with chocolate icing. Those who have not tried this wonderful confection are truly making poor life choices.

If you want to be one of the cool kids, go here for a scrumptious Boston cream pie recipe.

This recipe is straight from the pie Gods. It’s nutty, buttery, caramel goodness makes the pie one of the most satisfying pies of all time, but I might be biased because it is one of my favorite desserts of all time. To make this pie even better (if that is even possible) you’ll want to pair it with a scoop of vanilla ice cream. Talk about a decadent duo!

To take a crack at my favorite pie, check out this wonderful recipe.

For some peanut buttery goodness, try this recipe.

To try your hand at this divine, chocolatey pie head on over to Betty Crocker.

This pie combined crushed butterfingers, peanut butter, cream cheese and chocolate syrup. It can be a great dessert if you’re looking for something new to sink your teeth into for Thanksgiving.

Here is a no-bake recipe if you want to check it out.