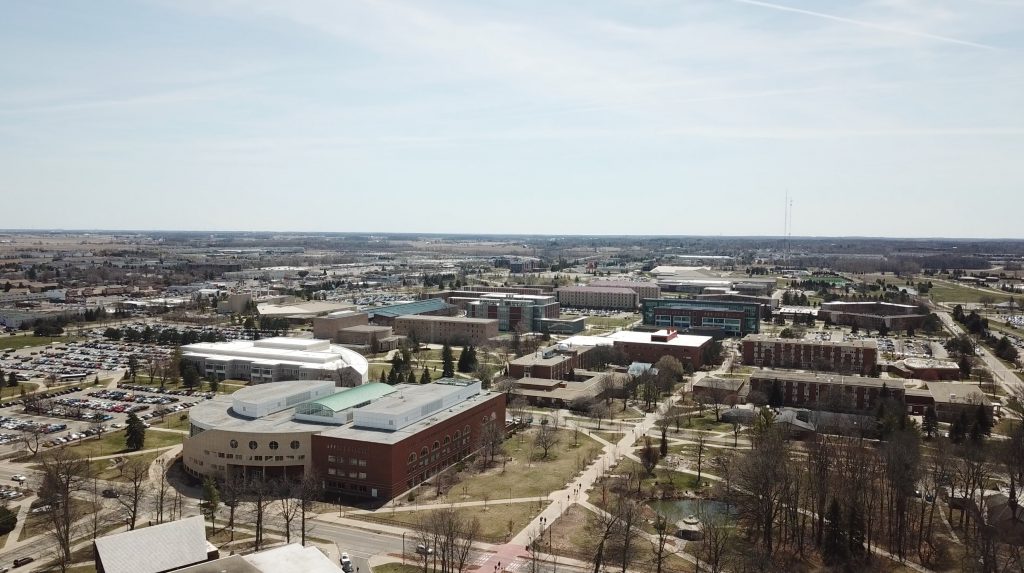 A fresh new post arrives on the Central Michigan University Class of 2018 Facebook page, accompanied by the consistently cheerful “ding!” that signals a new notification.

“Looking for tickets to the 9 a.m. graduation,” it reads. “Willing to pay top $$$.” A scroll down the page reveals dozens of identical posts, all echoing the same plea. There are posts for each of the graduation ceremonies, most left unanswered.

This isn’t the only platform littered with requests. The search has overflown into corners all over the Internet: on Reddit pages, in Facebook groups, posted desperately to Twitter accounts.

In May, graduating university students opting to participate are expected to walk across the stage, shake CMU president George E. Ross’ hand, and accept a rolled white sheet of paper in place of their pending diploma. Five graduations will take place over the course of a weekend: one on Friday, three on Saturday and a final doctoral ceremony on Sunday. Students are assigned to a ceremony based on degree, and undergrads receive four tickets for family members and friends to attend.

For many, it’s the last hurrah; the culmination of their past three to seven years of effort. It’s the finish line after a long, assignment-burdened race—one they’re eager to cross.

Bailey TeBeau, a social work major from Grand Haven, MI, is one of those graduates. After four years at Central Michigan University, she’s ready to complete her last assignment: the graduation ceremony. She’s the last of her family to graduate college, and her support system has been planning this weekend for months.

Back in October, TeBeau’s father had already booked his hotel, while her brothers prepared to fly in from North Carolina and Los Angeles. Her aunt, uncle and mother, too, had planned on attending—until TeBeau realized she only had four tickets.

For Tera Fracala, the story is similar. The family studies major, from Jackson, MI, has her own entourage coming to see her shining moment. Among them are her sisters, her mother and her nephew. After Fracala’s father passed away in high school, these same people became the center of her world.

“They were my biggest supporters,” she said. “[They] pushed me to accomplish all that I have… I want to share this amazing moment with the people I love.”

Just like TeBeau, Fracala will need more than four tickets to accommodate her entire group.

The university itself won’t be who these students turn to for more tickets. On the commencement website, a frequently-asked-questions page answers succinctly: no, they cannot supply more tickets to graduates.

Instead, TeBeau and Fracala, like many others, have tried to find their tickets in more creative ways, asking friends of friends, bribing classmates and posting on the Internet.

The demand for tickets is a capitalist dream: with more people searching for tickets than looking to give them away, it’s a supply and demand system guaranteed to profit the seller — for a pretty penny.

“At this point,” said Fracala, “I’m willing to pay pretty much anything.”

DeAngelo Barrow, a law and economics major from Canton, MI, is, too. He didn’t want to walk at graduation, but at his parents’ insistence, will be. He hasn’t put a limit on how much he’ll pay.

“This is what’s gonna make my parents happy, so I can’t set a price on that,” he said.

Currently, ticket prices are hovering around $50 on the Facebook pages, with other sellers offering time-framed online ticket auctions selling the ticket to the highest bidder.

Emily Bell, a May 2017 graduate, remembers her search for graduation tickets. “Someone in my class ended up selling to me! I made posters and sent out emails. [I needed] one for my husband so I ended up paying between $50-80.”

According to the 2017-18 operating budget, $104,000 was allocated to graduation and commencement spending. Alternative solutions, like adding additional ceremony times or tenting outdoor, would likely run the school’s final cost higher.

Emily Fedewa, a dietetics major, decided to sell her tickets. “[It turned out] my graduation time was at 6 p.m., which is late in the day for my family. Plus, either way it would have been a pain for my family to come since there’s a two-year-old involved.”

She added that if she had decided to attend the ceremony, she would also be stuck buying tickets, a cost she couldn’t afford. Instead, she turned to the CMU Class of 2018 Facebook page to sell the ones she had.

Fedewa sold two of her tickets to TeBeau for $50, around half the price many others are buying for.

“I don’t have the heart to make people spend a crazy amount on something I got free. I really do need the money, but not everyone can afford to spend hundreds of dollars on graduation tickets either,” she said.

A month and a half away from graduation, Fracala and Barrow were still searching for tickets.

“Most times people usually get the tickets they’re looking for, even if it’s just one. So, I have faith,” Barrow said.

Meanwhile, new posts cheerily continue to appear on the CMU Class of 2018 page.