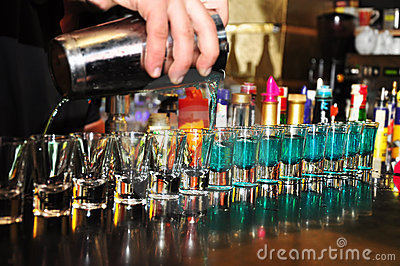 It was a Friday night in November; the busiest night of the week in bar world and the worst possible night for the bartender to come down with a chill, fever and other flu-like symptoms. She had to leave and find the comfort of her own bed, which left my boss and me alone with a bar full of empty-glass-waving, unforgiving faces.

“Think you can handle it?” My boss laughed. I didn’t. But I said yes anyway and walked behind the bar like I was stepping up to bat with 3 on and 2 outs.

“Can I get a grape tootsie roll? The shot, not the drink!” yelled the tall blonde.

“Bud Light draft. Those are still a dollar, right?” asked the guy with the mustache.

“Hey sweet cheeks, my glass is empty,” said the guy at the end of the bar who was waving his glass in the air.

I just stared at them. It’s like they were speaking a foreign language. My boss, Mike, came up behind me and told me quietly to start at one end, and work my way to the middle, where he would be doing the same thing. 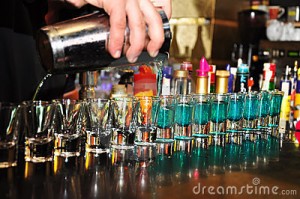 I was awkward at pouring draft beer. I didn’t know how to make anything that didn’t tell me what it was in the name of it. Jack and Coke. Captain and Diet. That I could handle. A Wet Piece of Ass? That I couldn’t. But I knew how to talk to people. I made jokes about not knowing what was in that sexual-sounding drink and spilling beer on myself. I knew how to make people laugh.

Last call seemed to come an eternity later, but it did come. Mike helped me kick the drunks out, make sure none of them were driving and lock the doors.

“Did you have fun?” he asked while counting the money out of the register.

And I realized I actually did. I smiled tiredly and shook my head yes. He could tell, and said he was going to start scheduling me for bartending shifts.

I slowly got better. I remembered faces and what they drank. I knew what import beers we had. What wine we had. What was in a Wet Piece of Ass. I became a bartender.

It wasn’t always fun. There were nights I wanted to walk out and never look back.

The biggest bar night of the year was one of those nights. It was the night before Thanksgiving and my small-town bar was full. Around midnight a group of three lumberjack-looking men sat down at the only empty seats at the bar, ordered a drink and asked to see a menu.

“What can I get?” I heard the tallest man say as I was serving someone else.

Without thinking twice I told him he could get whatever he wanted as I walked closer to take his order.

“Yeah? Well how about you sitting on my face then?” said the man with a laugh.

“Anything but that,” was all I could muster with a jaw hanging open and cheeks the color of a fire truck.

Another night that made me regret my job choice was a very slow Wednesday. Only a few people were in the bar, and we were planning on closing early. All of a sudden, about 30 people stumbled through the door yelling and laughing, wondering if we were still open.

It turned out to be a bachelor party who wanted its last stop to be my bar. I began to serve them, turning down some belligerent requests for alcohol and serving water instead.

The overly drunk bachelor’s request was denied, and he took a seat at a tall table, resting his head on his arms. Within seconds, the man was falling over backward onto the floor, knocking over tables and bar stools in the process. He was out cold. And that’s when we smelled it.

The bachelor had pooped his pants.

I asked the groomsmen to take him home. They carried him out in his newly brown-stained khaki pants and were followed by a trail of liquid mess plopping onto the floor with every step.

My job isn’t always easy, but it’s the people I meet that keep me coming back to work every day.  The money I make in tips doesn’t hurt either.

The longest bar night of the year is New Year’s Eve, where after watching the ball drop, bars are allowed to stay open until 4:30 a.m. instead of the usual 2:30 a.m.

I was scheduled to close, and was told by my boss to close at the normal 2:30 a.m. — unless there were still drinkers in the bar — in which case we were to stay open until 4:30 a.m. When 2 a.m. came, I called last call. There were only four men in the bar still drinking.

“How much will it cost me to keep this bar open until 4?” said the suit-donned man with the open tab. 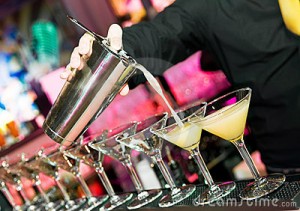 I told him it would take a pretty hefty tip to keep me awake, laughing.

“You got it, sweet butt,” smiled the man.

I stared at him trying to figure out if this was a serious request. Crown Royal is a top shelf whiskey. It’s not cheap, and this man just ordered 10 on a tab that was already well past $200.

He passed out the drinks to the stragglers still remaining in the bar, but still didn’t finish. I closed out his $450 tab, as well as his friend’s, whose was a mere $100 in comparison. They both swiped a credit card, and then I escorted them out and locked the door. It wasn’t until I was back inside that I looked at the receipt they had signed for me.

A quiet 30-something came in for her birthday one busy Friday night with a few friends. After drinking her share of beer, she told me it was time for birthday drinks.  I started making her shots that she had always wanted to try, but never had the guts to order.

She said that was all she could think of. She stumbled awkwardly to the bathroom with a girlfriend, then came out abruptly and said she was tired. Her confused-looking friends got up from their bar stools and followed her out. It wasn’t until I went into our too-small bathrooms that I found the reason.

She had vomited, and not in the toilet.

There was vomit on the walls. Vomit on the mirror. In the sink. On the floor.

She came in the next day to apologize, and said they had both thrown up and apparently missed the toilet. She blamed it on bad Mexican food for her birthday dinner, red in the face. She apologized awkwardly and left. I think we both knew it wasn’t the food, but her secret was safe with me.

And this brings us to the culmination of all that could go wrong in one night in bar world.

It was a busy Saturday night. We had a band playing like most Saturdays, and the bar was filled to watch. I watched a cowboy-wannabe walk in, but didn’t think twice about it. My bar attracts some classy individuals most nights. The man had racked up a $100  tab when his mood suddenly changed. He had to be cut off.

“What the hell did I do to you?” the cowboy screamed.

I calmly told him he had had enough to drink, and I wasn’t going to serve him anymore. It wasn’t anything personal.

“Yeah, you cunt? See if I ever come in this shit-hole bar again!” he yelled with such force his cowboy hat almost fell off his head.

“That’s enough,” I said calmly. I had dealt with being called the worst names in the book before, so this was nothing new. But he didn’t stop. He proceeded to call me every dirty name he could think of, and insult me in ways I had never been insulted. But then came the kicker. The cowboy took his original seat at his table.

He never wanted to be in my bar again, yet he didn’t leave. I knew there would be trouble.

A regular and known fight-starter walked in the door, as if a mental alarm went off that I was having a bad night.

He towered over me standing on the side of the bar, ordering his normal Budweiser. He hadn’t even finished it by the time the fight broke out.

The cowboy lit a Marlboro soon after I handed out the Budweiser. I told him he couldn’t smoke in the bar, but he pretended he couldn’t hear me.

“Hey! You can’t smoke in here!” yelled the fighter with such force that all eyes seemed to be on him.

“What are you going to do about it?” said the cowboy in a Western movie fashion.

The fighter walked calmly up to him as I grabbed the phone, ready to dial 9-1-1. He plucked the Marlboro out of the cowboy’s hand and put it out in a stranger’s beer. I began to dial.

Fists started flying. Bar regulation states that I’m not allowed to leave from behind the bar in the event a fight breaks out, but I couldn’t have moved if I tried. I could barely squeak out to the emergency operator that I needed the police to come to my bar.

Strangers broke the fight up and the cops arrived within minutes. I ushered everyone out and couldn’t lock the doors fast enough.

My seven minute commute home didn’t seem long enough that night.  My car is where I clear my head after a long night. I wondered to myself why I bother going back. Why I put up with these drunks. Was it really worth it?

I smiled to myself. Of course it was.

Whether it’s a night of serving one-dollar Bud Light drafts with 10 bucks in my pocket at the end or a night filled with $100 tabs and a huge dinner service that I leave with a few hundred dollars, I love my job. There have been good nights and there have been nights so bad I never wanted to return. I’ve been complimented and I’ve been slammed. A good night is beyond words, and a bad night is still pretty good when you love your job this much.

I am a bartender.