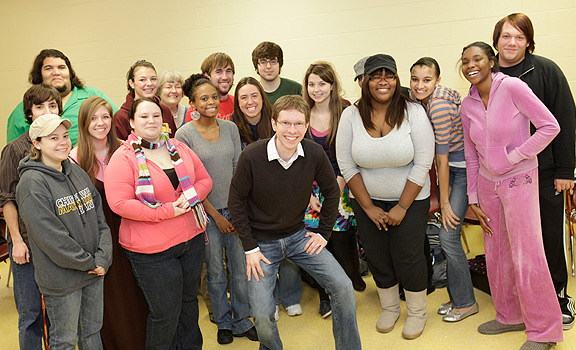 The first day of class is exciting for some. The familiar arena — coupled with a new leader possessing a slew of knowledge — can be intimidating, but some crave a good challenge. The brave ones take their seat fully aware of what lies ahead, eager to expand their minds.

Others walk into the enclosed dungeon with weary eyes. They sink lazily into a

chair, waiting to endure the duration of a lecture touting tedious formalities and sketchy icebreakers. Blank faces glance around the room. Fingers tap away at cell phones. Awkward silence, in all of its stilted angles, hovers through the stuffy air.

You won’t find the latter scenario in any of Jeffrey Bean’s creative writing classes. In fact, when students read the course description for Professor Bean’s ENG 392 poetry class, it becomes obvious that his philosophy is a little different:

Generally, class objectives are broadly embedded into a syllabus that can guarantee upon word for word reading a level of amusement similar to that of peeling a carrot with a blunt knife. In Bean’s class, however, the course description matches the content of the class itself, nearly verbatim: Students do take poetry into their own hands. They read it, write it, yell it, tear it up and put it back together — sometimes all in one session.

Junior August Orlow, a former student of Bean’s, enjoyed the seemingly quirky actions that Bean engaged in during class.

Orlow, originally a political science major, changed his area of study in his sophomore year to creative writing after a short time of being in Bean’s ENG 294, Introduction to Creative Writing course. The validation of his decision to switch had become apparent when he was sitting in math class thinking of stories or poems he could write.

“I began to see the reason why his slots for registration would fill so fast. He teaches you how to get off the subject. He exemplifies what he teaches and lives by it,” Orlow said.

Perhaps most significant for Orlow is the effect that Bean had on him as a student and ultimately as a person: “Bean taught me how to bend reality with my writing,” he said. “I can look at things from a different perspective. I can write poems to amplify the best times of my life and to alleviate pain through the worst.”

Bean was born in Bloomington, Ind., and took a liking to music early on. He attended Oberlin College in the small town of Oberlin, Ohio. It was there that he attained his bachelor’s in music, though he admits about halfway through his studies he realized he wouldn’t be a musician. He took a job waiting tables at a Tibetan restaurant and even spent time as a gym teacher, all the while reading and writing whenever he could.

Soon after graduation, he moved to Portland, Ore., with a few friends. It wasn’t long until he realized that his intentions were to attend graduate school, however, and he chose the University of Alabama to pursue his master’s in fine arts in poetry.

“The seeds had been planted by my parents,” Bean said with a quirky grin and a laughable demeanor.

His decision to pursue poetry was not one made with regret; he credits his musical background as being a factor that set him apart during interviews.

“I realized that poetry and writing could have some of the same power that music had,” he said. “I got excited about some of the connections I had seen.”

Even though Bean is known for his charismatic nature, he has a more restrained side as well.

“I have a pretty serious side too,” he said. “My wife says people never see this. I’m very quiet and thoughtful at times — call it subdued.”

He also admits to being a closet fan of the show “The Gilmore Girls.”

“I totally got sucked into it,” he said, blaming his newfound infatuation on the workings of his wife.

In the four years that Bean has been teaching at CMU, he has attracted the attention of both students and the administration. He was a recipient of Sigma Tau Delta’s “Great Expectations” award in 2009, recognizing excellence in teaching. A poem of his was featured in the Writer’s Almanac and was read by Garrison Keillor. It was later reprinted in Keillor’s “Good Poems” anthology, gaining national attention and featured among such writers as William Carlos Williams and Walt Whitman. In 2011, Bean was recognized alongside colleague Robert Fanning for the CMU Excellence in Teaching Award.

His decision to teach at CMU was heavily influenced by the students and colleagues he had met in the English department prior to taking the job.

“This is the place that felt the most like home,” Bean said. “I feel so connected to students; of all the places I’ve taught I have the strongest connection with students here.”

It’s this connection that Bean identifies as being the favorite part of his job.

“The fact that we get to talk about poetry and work with it; I discover a lot of new possibilities working with the students. I love what I do, and I always loved how the professors I had would show their passion for the subject.”

Sophomore Ben Harris first noticed Bean while attending a poetry reading. He remembers his joking personality that had the whole crowd erupting in laughter.

“He is incredibly witty and his jokes are hilarious,” he said.

Harris has taken two classes with Bean and is currently enrolled in another. One of his most memorable moments came at a time in which Bean would probably like to forget: Bean came into class one day and explained a situation at his home where sewage had been backed up all day. He had just left the house to go to work after talking with the plumber about the ongoing problem. He came into class huffing and puffing and said it was OK and that he was excited to be in class, Harris said.

Harris, a double-major in English and History, has had Bean as an adviser since freshman year. Since first seeing him at the poetry reading and to this day, he has made a positive impact on both Harris’ academic career and his personal life.

“I wouldn’t even be writing poetry without him,” he said.

Bean’s influence makes a lasting impression wherever he goes. One student from the University of Alabama emailed Bean as part of an assignment to write a letter to a professor that she felt left a remarkable impact. She admitted in the letter that for the first time in two years she was comfortable with speaking in front of classmates in the encouraging atmosphere Bean had established with his students in the classroom.

English major Tonya Allen tells of a similar experience with her former professor and the captivating presence he displayed. She favored the humor that Bean incorporated into his classes and his “almost constant positive attitude.”

“He really helped me boost my self-esteem about my writing; the class reminded me of why I love writing,” Allen said.

Allen says Bean really cares about his students and their creative potential, and that it was in his class that she finally found her voice.

Senior Rachel Thomas, also an English major and student of Bean’s, reminisced about the last day of the first class she had taken with him. After they had filled out the SOS forms and Bean had re-entered the room, the students stood atop their desks and said, “O captain my captain,” in reference to a famous Walt Whitman poem and a scene in the movie “Dead Poet’s Society.”

“He said that he knew he made an impact, and that he wouldn’t forget that day,” Thomas said.

She recommends that students across all majors take a class with Professor Bean, noting that it can make anyone a better communicator.

Lastly, Bean offers this advice for students: “Don’t be afraid to follow your passions. If you have curiosity in the arts and humanities, invest some time in it — it will pay dividends in the end.”