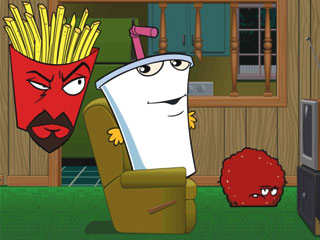 ‘Aqua Teen Hunger Force’ is an abstract, and euphorically outlandish adult cartoon – starring a box of french fries, a milkshake and a ball of ground beef.

This seemingly minimalistic program has been on Cartoon Network’s late-night Adult Swim block since its beginning, in 2001 – one of the four spin-offs of the original ‘Space Ghost Coast-to-Coast’. The series has produced 100 episodes, a full-length film (with a sequel due summer of 2012), and the 2007 bomb scare in Boston – prompted by guerrilla marketing tactics and LED lights (look it up).

The three anthropomorphic foodstuffs (Frylock, Master Shake and Meatwad) were pitched as a group of crime fighters originally. The producers of the program quickly abandoned this direction and reformed as a surreal sitcom – banking on absurd plots, and non-adventures through a rare breed of humor. A late-night troublemaker’s favorite.

This bizarre network maneuver comes from a device woven deep into ‘Aqua Unit’s motif. The show regularly throws new viewers into disbelief. The outline is simple – no outlines allowed. (Adult Swim offers the chance to purchase a Meatwad fully-functional hot-air balloon for $70,000… get it?)

Despite the program’s cult-like success, Adult Swim producers have decided to change the iconic name – replacing ‘Teen Hunger Force’ with ‘Unit Patrol Squad 1’. The series returns to television May 2, and will debut the new name (and new theme song) before the episode on May 8 – during which the trio will relocate from New Jersey, to Seattle. (Fans are more than likely hoping the group’s neighbor, Carl Brutananadilewski, makes the move also.)

The original theme song, produced by hip-hop legend Schooly-D, will be scrapped for a new version – by Joshua Homme, of Queens of the Stone Age.

Still don’t believe it? Hear the news from Meatwad himself.