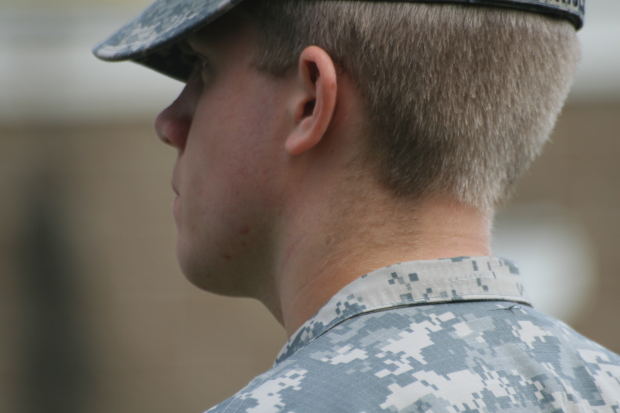 A wounded heart hides under the shelter of a soldier’s uniform.  He bears a serious face, revealing no feeling.  He shows concern but does not voice it.  His eyes hold back all emotion.

Someone who faces the reality of death in his everyday life found no rest on his recent return home.  He’s seen five peers die in the last three months, but the funeral he came home to is worst of all.

Today he embraces the casket of not a fellow soldier, but a brother — a brother he spent 23 years of his life with.  A brother who shaped his childhood.  A brother with whom he had shared years of laughter, hard times and memories.

No matter how many graphic images of war he has witnessed, nothing will soften the tragic impact of this day.  No encouraging words can lessen the sting of pain as he embraces the casket of his brother, Kevin, who had fought enough battles of his own against a weak liver.  A young man who seemed to always have more life in his spirit than his feeble body was able to support.

As the soldier stands straight in his uniform, he gazes around the room.  His bride stands beside him with a sad smile that has a hint of hope for comfort.  He embraces family members and friends with a serious nod and handshake.  He responds to those who are curious about his journey with short answers that leave room for questions.

At the end of the funeral, he stays close to his family.  Memories of his late brother bring sad smiles to his face.  He takes the night to mourn with his family, but has little time to rest.  Tomorrow he returns to duty and must prepare for battles, both on the field and off.