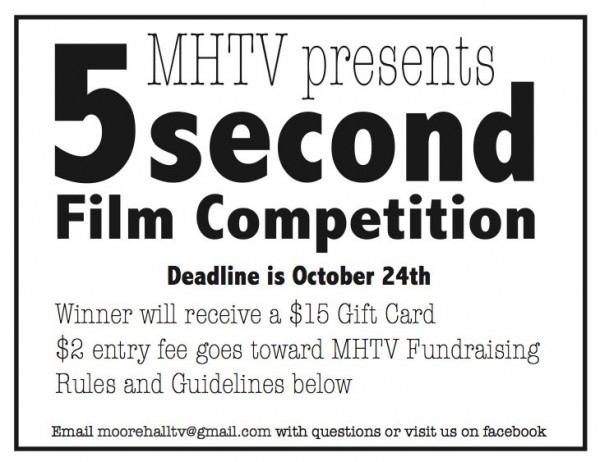 Student-run Moore Hall TV is currently accepting submissions for its “5 second film contest” that will showcase the works of student-produced short films. The contest is open to anyone who would like to submit.

Danielle Mann, a field producer in charge of supervising the promotions that run on MHTV, was inspired by the five-second clips seen at 5secondfilms.com. She then got the idea to run a contest on campus and started putting up fliers. The contest is also promoted in video production classes and on MHTV’s Facebook.

“Our main goal is to get more content out there,” said Mann, who is the producer behind the concept. “We want to get more people involved with the station.”

This is the first year that MHTV has hosted such an event. Faculty Adviser and Video Unit Head Ben Tigner, one of the judges for the competition, is eager to see student submissions.

“The purpose of the event is to give an opportunity to young film makers to apply their concept in a simple format for a college audience,” Tigner said. “The five second film process is relatively new, so its a fresh take on an old concept.”

A strict time limit of a mere five seconds for the film may seem quite brief to most viewers, but Tigner assures that the limit is placed for a reason.

“With five seconds, there’s little time to develop a narrative or characters, so the idea has to be solid from the very beginning,” says Tigner. “The jokes are simple, straightforward, and often relatable to most audiences.”

In a clip entitled “Late For Work” on the 5secondfilms.com website, a video shows a man who fails to wake up to his alarm clock and must scramble to get to work on time. The sequence of his entire day is summarized with the shout of an obscenity spanning the video’s duration, casting a certain unchanging theme of being rushed.

Mann predicts the humorous element in “Late For Work” to be present in the student submissions as well.

“Our motto is ‘think it, shoot it, show it’ ” Mann said of the broadcast community at CMU. Among other underused but possible themes that students may incorporate into their films include that of romance and drama.

Animations, cell phone-composed productions and even cinemagraphs—a still image with a specific element within the image that is in motion—are just a few of the possible mediums that students can use to create their five-second films.

“It’s certainly a creative outlet, (but) the challenge with these competitions is time though,” Tigner said. “Most students struggle balancing work, school and extracurricular activities. This is just one more opportunity in that mix.”

The concept was also devised with fundraising opportunities in mind. For every entry, there is a $2 required fee that will go towards MHTV fundraising.

The most entertaining film will take the top spot as determined by the MHTV E-Board, consisting of Faculty Adviser Ben Tigner, Matt Bleau and Danielle Mann. First place will receive a $15 gift card for a restaurant, while the runner-up receives a MHTV T-shirt. Selected films will be aired on MHTV.

Mann hopes to see at least 10 entries for the contest.

Submissions must be “content appropriate,” which means they must adhere to the PG rating of the ratings system developed by the Motion Picture Association of America.

Multiple entries are allowed. $2 entry fee per film is required.

Turn films in to the MHTV mailbox located in the BCA office, labeled and with completed entry form.

To be shown on MHTV (channel 34 on campus and channel 97 on cable TV), the film must be appropriate in accordance with MHTV standards. Visit www.mpaa.org for PG ratings description.

Films must be exactly 10 seconds long in total, including two seconds of title and three seconds of credits/end title.