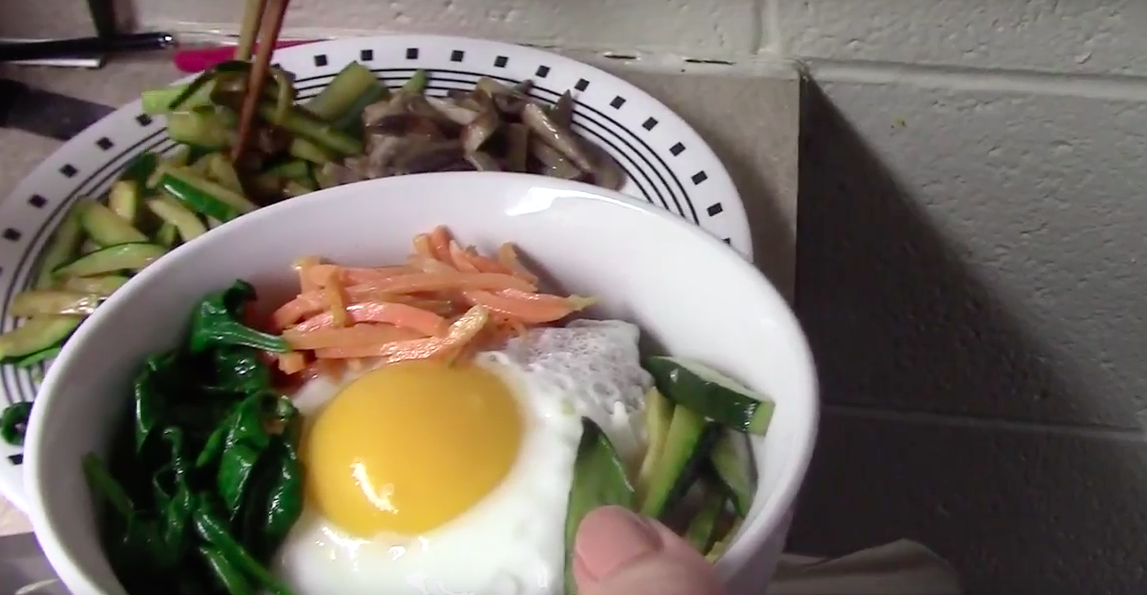 Every day we have to think about what to eat for breakfast, lunch and dinner. But for international students who study at Central Michigan University, there is also the question of what to eat in a foreign land.

Nowadays more and more international students have come to study and live in the United States. For many of them, especially the Asian students, it is challenging to adapt to the food, culture and dietary habits.

Jiani Liu is a Chinese graduate student majoring in music education at CMU. This is her first year living in the United States. Although she likes the American life style, she is not used to the food. For her, many American foods such as pizza, burgers and steak, are very fattening and not very healthy, because they often contain a lot of fat and high calories. She prefers Chinese food.

Normally, Jiani likes to drive to the nearest supermarket to buy some fresh ingredients and cook some healthy Chinese food at home. Today Jiani is going to make fried rice. Fried rice is a dish of steamed rice stir-fried in a wok, often mixed with other ingredients such as eggs, vegetables and meat.

It is sometimes served as the penultimate dish in Chinese banquets, just before dessert. The two most popular and famous varieties of fried rice are Yangzhou fried rice and Fujian fried rice.

Jiani has prepared beef, spinach, eggs and rice as the dish’s major ingredients. First she cooks the white rice in a rice cooker, during which she cuts the beef into smaller pieces, adds some spicy sauce to them, and then cuts the spinach into pieces. Next she whisks the eggs and fries them in a pan. After that, she immediately puts the beef and spinach pieces into the heated pan, and then mixes the steamed rice in, frying everything together.

Jiani thinks that fried rice is a good home cooking choice, because she has a full class schedule this semester, and cooking fried rice is simple, convenient, easy-to-make and does not require many varied, complex ingredients.

Yoonjin Park is an exchange student from South Korea. This is her third semester studying in the United States. Yoonjin likes pizza, but like Jiani she also thinks many American dishes are “too cheesy, too oily or too salty.” They are too heavy and fattening for Asian people and are not to their tastes. She prefers to cook Korean foods by herself.

Every week she gets a ride in a friend’s car or takes a bus to the supermarket to buy some fresh vegetables. Sometimes, she also goes to Lansing with her friends to buy some Korean food.

Today Yoonjin is making Bibimbap and chicken salad. Bibimbap is a signature Korean dish. It is served as a bowl of warm white rice topped with sautéed and seasoned vegetables called namul, a Korean hot pepper paste called gochujang, a fermented soybean paste called doenjang or soy sauce. Other common additions are a raw or fried egg and sliced meat, usually beef. The hot Bibimbap is stirred together thoroughly just before eating.

Yoonjin’s chicken salad is similar to the common salad in the United States, except that the salad sauce is her own homemade concoction. Yoonjin first washes the vegetables and chops them into pieces. Then she mixes white rice with some black rice and cooks them in the rice cooker. While the rice is being cooked, she cooks the vegetables, prepares her own special sauce and fries eggs. After the rice is cooked, she puts the steamed rice into a bowl, and then tops the rice with the cooked vegetables, the homemade sauce and the fried egg. Now the delicious Bibimbap is done. After it is stirred, it is ready to be enjoyed.

Ran Wang is a northern Chinese girl born in Shanxi province. This is her second semester at CMU. She has a love-hate relationship with the foods in the United States. While she likes the flavors of some American dishes very much, in particular the dishes offered at Buffalo Wild Wings. However, she worries that many American foods and dishes cause her to her gain weight very easily, and that fast foods are too salty and unhealthy.

Therefore, she often makes Chinese foods by herself on the weekends. One of her favorites is Shanxi flour food. Just as rice foods are very typical foods in southern China, flour foods are some of the most typical kinds of northern Chinese foods. They have been popular with the Chinese people since ancient times.

This time Ran is going to make one of the northern Chinese special flour foods – Shanxi pies. The ingredients for making the pies include: wheat flour, minced meat, and shiitake mushrooms, that were all brought from her hometown.

Ran first mixes the flour and water to make dough. She then mixes the minced meat and the mushrooms and cooks them together to prepare the filling for the pies. Next, she makes pie crust with the dough, stuffs the filling into the pie crust, and then she fries the pies in the pan. For her, it is really a wonderful time to cook and eat the homemade Chinese pies in the faraway foreign land.

A taste of home

While some international students see studying abroad as a stepping-stone to independence, for many others adjusting to an unfamiliar lifestyle away from home has proved challenging. Like Jiani, Yoonjin and Ran, many international students enjoy home cooking, not only because homemade foods are healthier and more delicious, but also because they feel cooking hometown meals is a good way to combat their homesickness. In a foreign land, the smell and taste of homemade food can bring happy reminders of home.