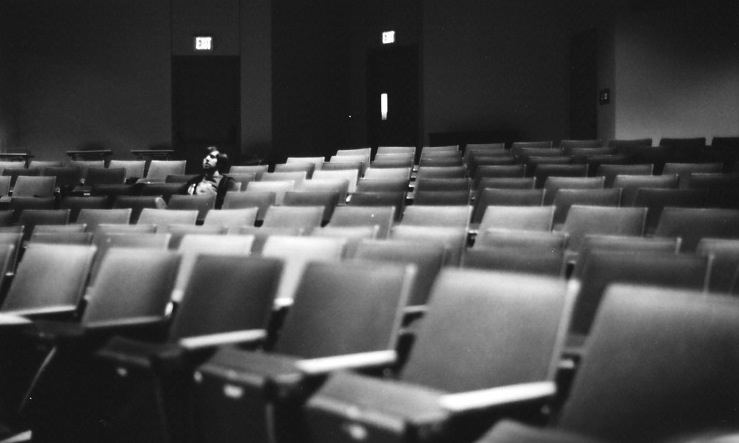 How important is the first seat you sit in on the first day of class? For many it is the place where they will remain for the entire semester.

I first noticed this trend at the beginning of my college career. Curious to know why and to better understand the rationale behind it, I decided to carry out a mini social experiment for a period of three weeks. For the experiment, I sat in a different seat in class every day to see what would happen.

The Experiment in Action
During the first week, I noticed it to made a lot of people uncomfortable, but nobody voiced their frustration. The second week, I sat in the seats of three particular people that gave me a reaction.

In my history class, I decided to mix things up and leave a book bag in a spot toward the front of the classroom and leave the room. When I came back, I noticed my bag had been moved to another spot and Randy Schafer now occupied the seat.

I caught up with him later, telling him about the experiment. I asked what his initial reaction was when he saw the bag and why he always sat in the same seat.

“I was very confused because I’m used to sitting there every week, and I usually sit where I can see,” Schafer said, “I picked [the seat] because of sight. when I pick a spot, I usually sit there the rest of the year. There’s not assigned seats, but to me, personally, it feels assigned.”

In a journalism class, I sat in another front seat, which was Juliana Kampf’s usual spot. When she came into the room and saw where I was she said “you can have it this time,” then walked away, taking the front seat across from where I was sitting.

I caught up with her after class, as with Schafer, and told her about the experiment, asking what she thought of my spot heist.

“I guess I was a little surprised because nobody ever really sits there beside me. I wasn’t mad about it or anything, I guess I was just like, ‘got to move’. I felt a little out of place because I always sit there, even in my other classes I have in that same room.”

Like Schafer, she sat in the front to see better, but also to build a better relationship with the professor and to pay better attention.

I asked her why she thought this type of thing is common.

“We’re creatures of habit, especially our age group. I think we find it really hard to change our habits and how we do things, like our routine every day,” she said.

The last reaction I got was from Jordyn Hermani, also in a journalism class. When I sat in her seat, I knew she was coming down the hall. I didn’t see her reaction personally, I only saw the reaction of her friend sitting next to me and felt a pair of eyes glaring down at me from behind where I sat.

Though her reaction was nonverbal, it was the strongest of all. I debated on whether I should tell her about the experiment. After class I told her about my project and she was very understanding. We had a good laugh.

I asked her how she felt when I took her seat and what she thought about it.

“I had something I had to do that day with the girl that sits next to me in my usual seat that I couldn’t do. I was a little annoyed,” she said.

I asked her why she sits in the same seat.

I asked her what happens when someone changes or challenges the routine.

“It’s not messed up, it’s just more of a shock. You almost feel as if there’s this unspoken rule when everybody sits down in a certain spot, for X amount of time, that is your seat, even if it’s not your seat,” she said. “So it throws you off a little bit because you’re forced to sit next to someone whom you might not be as familiar with as the person you usually sit next to,”

Similar to Schafer and Kampf, she sits toward the front in order to hear better and be more engaged in the lecture.

The Psychology behind Seat Choice
From the experiment, talking with each of them and with Profesor Jeff Fortney, I came to the conclusion that students pick and stay in spots based on comfort.

Professor Fortney is a history teacher at CMU with a PHD in history, but studied psychology in during his undergraduate degree. I asked him why he thinks students always sit in the same seat.

“A lot of it comes with the comfort level of the student and the mentality of the student. A lot of times you see the front row people coming in are the most intense, from the start of the semester to the finish, and for them sitting in the front is way to keep themselves in check.

I asked why he thinks they don’t change seats.

“You don’t want a different seat because you don’t know what comes with that, the person next to you could be crazy,” he said.

I ended by asking him about the psychology behind why students pick their seats.

“It’s hard to just pin down, but I think it’s more than just choosing seats. Look at what people get at restaurants – they go to the same place and get the exact same thing over and over again,” he said. “It’s a comfort thing – sometimes the devil you know is better than the one that you don’t. From a psychological perspective, all I can speculate is that there’s safety in comfort and safety in habit.”