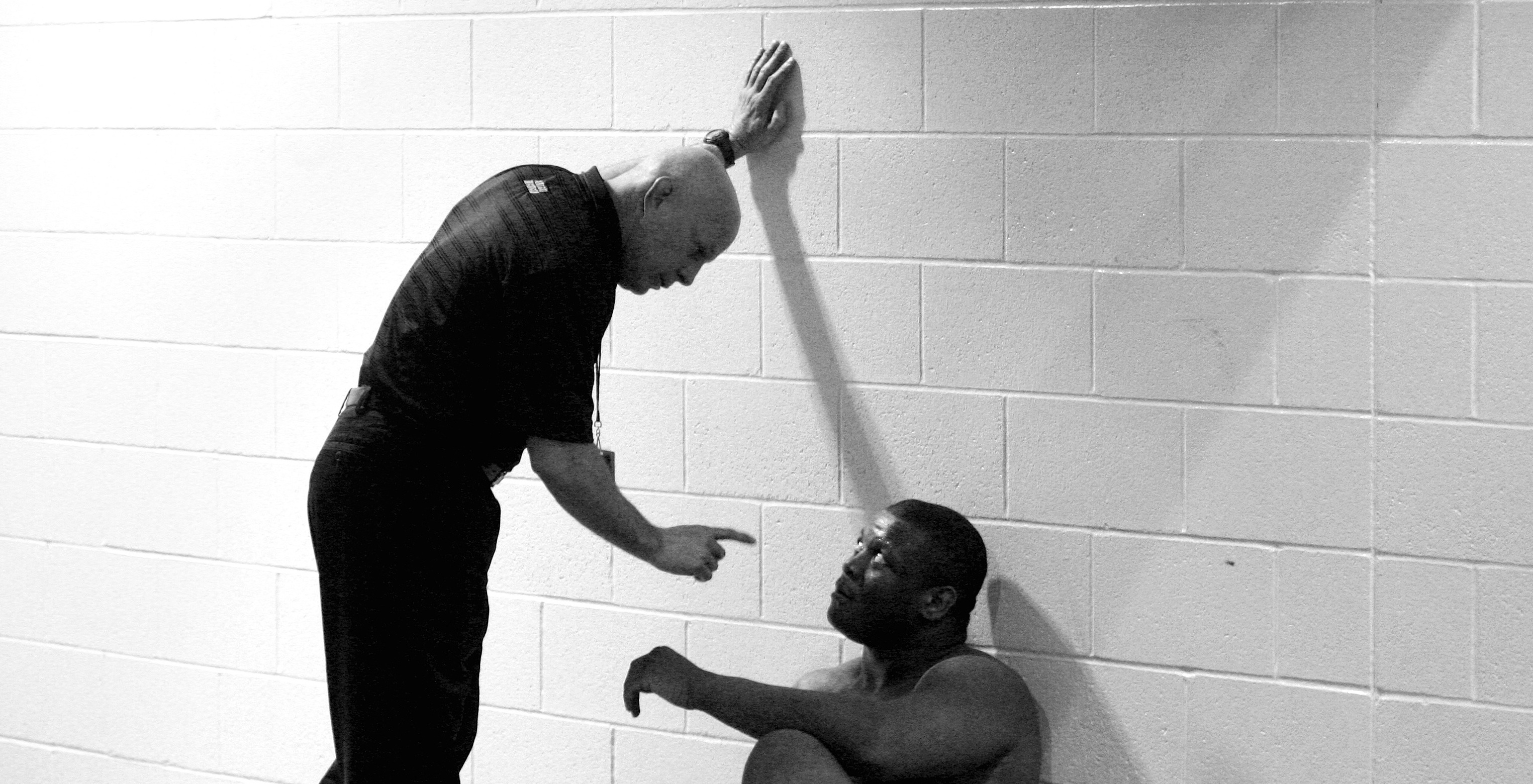 In the hallway of the Wells Fargo Center in Philadelphia, heavyweight Jarod Trice hangs his head as he slumps against the wall.  He has just lost his first round match in a close 5-4 battle at the NCAA tournament.  He envisions the match in his head, contemplating what he could have done differently and imagines the tough path that lies before him to reach his goal of being an All-American.  The path will be even tougher now that he has a high ankle sprain from his heart-breaking first round defeat.

“The way I see it, you have two options,” Coach Tom Borrelli says walking toward his heavyweight wrestler.  “You can injury default out of the tournament, or you can suck it up and accomplish what you have been working for the entire season.”

After that encouragement, Trice raised his head with determination in his eyes and a renewed fire in his heart, and became an All-American for the first time, against all odds.

Trice, now a senior, is a standout wrestler for Central Michigan University.  He is a MAC champion and a two-time All-American heavyweight after earning the honor again his junior year.  He has a body that was made for heavyweight wrestling: freakishly strong arms, swift feet, enormous hands and heavy hips.

His wrestling style is different from the typical heavyweight.  He is quick on his feet, and it looks like he could unleash a shot at any second. It is almost as if he is a little guy trapped in a big man’s body.  At first glance it is hard to believe how nimble-footed he is on the wrestling mat.  He is a giant compared to other wrestlers and definitely lives up to his peer-given nickname ‘Dough Boy.’

“People call me a lot of different nicknames,” Trice said.  “I’ve been called Dough Boy, Akbar Believe and recently I’ve been called Aladine Sosa.  I kind of gave myself the Aladine nickname.  I heard it in a movie and I liked the way it sounded.  Don’t really know what it means.”

Trice was born and raised in Highland Park in metro Detroit.  Even though Highland Park is known as a rough city, Trice never used that as an excuse.

“Everyone can make their own opportunities, even people in Highland Park,” Trice said. “I was able to capitalize on every opportunity that I got.”

He attributes his success to his mother and grandmother.  They were the people he looked up to growing up and provided him with encouragement to be the best he could possibly be as a wrestler, student and person.  Trice shows much gratitude towards them and considers himself “truly blessed.”

Trice was very close to not becoming a Chippewa out of high school, though.  In fact, he signed with CMU at 11:59 p.m., just one minute shy of the signing deadline.  He had numerous scholarship offers from different schools in both wrestling and football.

“Deciding where I was going to go to school was one of the most stressful times of my life,” Trice said.  “I chose Central because Coach Borrelli was very straight forward with me; something with him just clicked.”

He spoke with Borrelli for the first time just a day before he signed.  Borelli did not recruit him until late in the signing period after a previous heavyweight recruit backed out from committing to CMU.  In desperate need of a heavyweight, Borrelli called Highland Park Coach Glenn Washington about his 215 lb. junior wrestler, Marcel Dubose.

To Borrelli’s surprise, Washington recommended his senior heavyweight, Trice.  Borrelli knew of Trice but was under the impression he had committed to the University of Buffalo.  Washington informed Borrelli that Trice was still undecided, which led to the phone call from Borrelli that finally settled Trice’s decision.

Trice red-shirted his first year at CMU and filled the back-up role to All-American Bubba Gritter at heavyweight.  He took advantage of working out with Gritter and used him as a mentor.  Gritter’s expertise on the sport helped Trice learn what it takes to become an All-American and ultimately led to him becoming a well-rounded wrestler.

“Bubba and I weren’t necessarily friends in the practice room,” Trice said.  “We respected each other off the mat, but things got heated in practice.  I can remember numerous times when one of us would have a bloody nose or black eye.  But he improved my top and bottom game, and I’m grateful for that.”

Trice’s first year as a starter was respectable.  He was runner-up at the MAC tournament and went 2-2 at the NCAA tournament.  But he was not satisfied with the accolades; he had greater expectations for himself.

Once Trice had his first taste of being a starter, he became hungrier for success.  He used his first year as motivation to become a better wrestler.  His hard work led to him becoming an All-American for two consecutive years.

After Trice’s junior year, he took an Olympic redshirt.  He had aspirations to wrestle for Team USA in the Olympics. At the Olympic trials, Trice placed 4th.  After two wrestlers who were ahead of him on the Olympic ladder retired, he became the alternate for the 2012 United States Olympic team.

Now the stage is set for Trice’s senior year with a new goal in mind, to become an NCAA champion.  He is currently ranked fourth in the NCAA.  Undoubtedly Trice has a long and exciting road ahead of him, and he is up for the challenge.

“I’ll do whatever it takes to become a national champ,” Trice said.  “There’s no doubt I’m going to give it everything I got.  All the hard work has led to this.  It’s going to be a great year.”