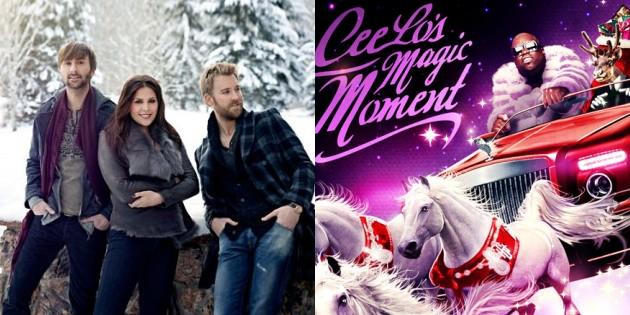 Snow is on the ground, holiday movies are constantly airing and stores are filled with crazy patrons, and while partaking in typical Christmas madness like decorating the tree or wrapping presents you’ll want to listen to your favorite holiday jams.  Although many celebrity holiday albums usually have an element of ridiculousness to them, they can occasionally become classics. Lady Antebellum and Cee Lo Green both had holiday releases back in October and this Battle of the Bucks settles whether or not these albums have the potential to become classics.

Lady Antebellum’s holiday release has 12 tracks covering songslike “Silver Bells” and “This Christmas.” The best song on the album is “On This Winter’s Night,” though overall lead female vocalist Hillary Scott missed an opportunity with this album. Tracks like “The First Noel” and “Silent Night” should have let her vocal abilities shine but her skills seem to fall flat.

Fans that are expecting the same strong vocal performance they received with the Antebellum hit, “Need You Now” will be disappointed. There is nothing particularly atrocious about the album, it’s just simply forgettable. None of the songs make a powerful impact.

While “On This Winter’s Night” might put listeners to sleep, Cee Lo’s “Magic Moment’s” first track titled “What Christmas Means” is dance-worthy. Another interesting track is a cover of “Baby It’s Cold Outside” featuring Christina Aguilera. Both voices are very dynamic, giving the timeless tune a renovating flare. Even so, it seems that Aguilera was too ambitious and overpowering in trying to make the song her own.

The biggest issue with “Magic Moment,” like with Antebellum’s, is Cee Lo’s failing attempts to cover other classics like “The Christmas Song” and “Mr. Grinch.” The songs are relatively simple and there various unnecessary vocal changes that degrade their classic character. Some tunes like “Christmas Song” should not be tampered because nobody can sing it like the original vinyl artists. “Mr. Grinch” featuring Straight No Chaser is covered in a capella style which actually sounds silly.

Despite making a couple of serious critiques, “Magic Moment” has covers that leave an impression. However, in this battle, Cee Lo is the clear winner. Lady Antebellum simply did not deliver, with mediocre covers followed and less than spectacular vocals.