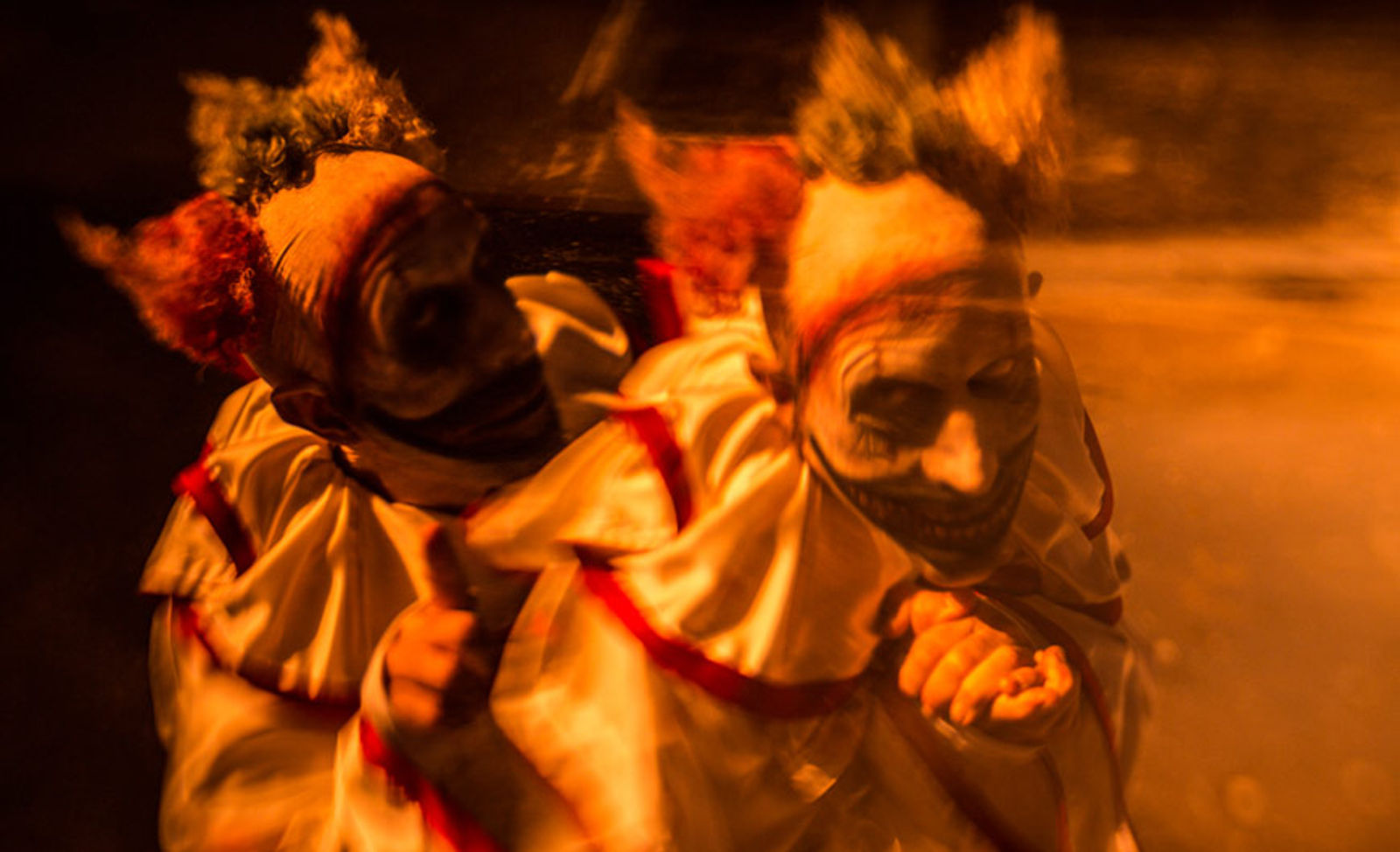 At the second half of the two-part Halloween episode, our cast gets a little lighter. We lost Twisty and Dora, folks. Let’s grieve together as we go through how this episode went down.

Wes Bentley’s accent plus Wes Bentley’s demonic second face – and just Wes Bentley – appear in a sea of green fog, visiting Legless Suzi (Rose Siggins, who had her legs amputated at age two) and Paul the Illustrated Seal (Mat Fraser, born with phocomelia, which gave him “seal-like” limbs), to find the “holy grail” of freaks; someone warped both body and soul. Their tales of woes don’t stir the visage though, so he bolts for Elsa.

The show briefly does the age-old quirky misunderstanding sitcom trope, with Elsa thinking that Mordrake is her expected stranger.

Mordrake isn’t aroused, however he and has his hell-bound posse of freaks pull the fake legs off of Elsa.

She couldn’t find stage work, so she “performed” by dominating men, forcing one to sit on a toilet seat tacked with upright nails. The shot zooms out to reveal a peep show happening simultaneously. The “watchers” Elsa called them (essentially referencing the TV audience, if ratings and internet chatter are to measure) decided to kick the pain up a notch.

The scene segues to Elsa in a room with presumably the same group of men from the peep show. She lays on the bed and accepts a drink from her supposed friends. It was drugged, and once impaired, the masked men restrain her to the bedposts and chainsaw her legs off, all in front of a camera. “They called it ‘snuff films,'” she said.

With the snuff circulating throughout Europe, destroying her potential stardom, Elsa was cursed to be who she remains, she reasons, begging Mordrake to kill her. Dagger raised, he nearly complies until he hears music.

“Miss Esmerelda” and Jimmy ride his motorcycle in the middle of the night, despite the town’s curfew, until it runs out of gas. Esmerelda thinks it’s a ruse to get her in the dark, though Jimmy insists he feels no attraction. “A pretty face isn’t your type?,” the faux-gyspy scoffs.

No time to argue though, as the trapped housewife escapes from Twisty’s bus, only to get line-backed by Twisty and dragged back, with Jimmy and Esmerelda conveniently witnessing from afar, until Dandy pops up and knocks the pair out.

When they wake up, Jimmy’s hands are tied together and Esmerelda finds herself in a box, with Dandy standing over her with a saw. Jimmy untangles his restraints and distracts the killer clowns to save Esmerelda and Twisty’s bussed victims. Twisty manages to grab Jimmy, but Mordrake appears for some freakish confessions.

Mordrake has Twisty focus his mind enough that he can (rather hilariously) explain his backstory through the diseased maw that is his mouth.

Twisty used to be a mentally challenged, fully-mouthed clown who loved children, but his carny coworkers accused him of molesting children so they can grow up to be clowns and have children sit on their laps, which spread quickly through the carny circuit, he explains.

Unable to find work, Twisty consequently returned home to Jupiter. After a toymaker rejected his toys and labelled him a pedophile, he attempted suicide with a sawn-off shotgun in his mouth, and failed. “I’m so dumb, I couldn’t even kill myself,” he laments.

When Elsa’s freak-ridden menagerie came to town, Twisty tried to do everything he could for children, such as kidnapping them and killing their parents who cruelly wanted them to do chores. He even kidnapped a “pretty babysitter” for the children, forcing them to serve as the audience for his twisted comical act, which Twisty says solidified him as the best of all clowns.

Mordrake was stunned; Twisty actually believed he committed those atrocities for the sake of Jupiter’s children. Mordrake then murders Twisty, and the misguided clown’s spirit finally finds peace. While Twisty’s origin felt rushed, and possibly a tad cliche, his flashback better adds more depth to the scene last week where he stared at a trick-or-treater from afar in the middle of suburbia. A Michael Myers with a soul perhaps (but he definitely got off on killing the toy man’s assistant in episode two).

Dandy then stumbles upon Twisty’s corpse, nabs his delightful face mask and tries it on – a solid way to contract Ebola.

Esmerelda calls the police, and while a cop dons Jimmy a hero, he denies any such allegation. They’ll pay for killing Meep, he says.

The entire town gathers at the carnival to thank Jimmy for saving the children. One of the fathers shakes his lobster claw, solidifying the thanks. The freaks are appreciated, at least for now.

Elsa lets Betty and Dot know they aren’t the headliners anymore now that more people are coming to the performances; that probably won’t go over well. Stanley, conman partner of (Maggie) Esmerelda, introduces himself as a Hollywood talent agent, and therefore, Elsa’s new best friend.

Dandy comes back to his house; Dora, the mammy, stands her ground yet again, but Dandy impulsively makes his first kill, with the lingering image of his giggling, gleeful face ending the episode. Dandy is taking up the killer clown mantle from his deceased, more sympathetic mentor, except there is no pretense of doing this for the children – he’s doing this for himself.

What were your thoughts on the episode? Did Elsa’s background freak you out (pun intended)? Will you miss Twisty and Dora? Does Jimmy’s constant hero desire bother you? Let us know at @GCMagCMU