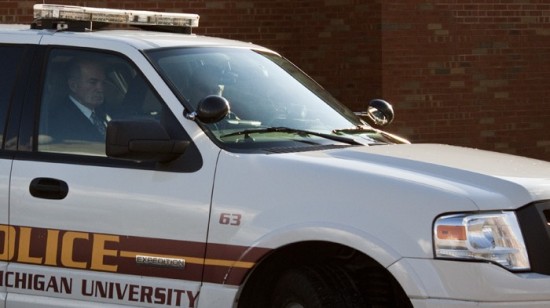 Pastor Terry Jones is escorted across the courtyard between Pearce and Aspach Halls by a CMU police officer after speaking to about 60 journalism students in Pearce Hall on Wed. Nov. 9, 2011. (Ryan Nielsen | Multimedia editor)

Terry Jones, the semi-infamous Quran-burning preacher from Gainesville, Fla., had trouble in his address to students at Central Michigan University.  Away from a web camera or a one-on-one interview with a  reporter, he seemed to think addressing a congregation of roughly 60 journalism students would be the same as the similarly-sized group at his church.

Rarely do people raise their hands in anything other than worship at a church service, but students in Professor Timothy Boudreau’s Media Law class used their raised hands at this attempted sermon to target questions at Jones’ anti-Islamic beliefs. Despite his claims to the contrary, Jones revealed his prejudice in the off-handed way he referred to people of Islamic faith.

At one point, a reporter from “The Morning Sun” pointed out Jones’ categorization of Arabic people as “easily angered.” Jones responded like he did with most of the accusations: admitting to it and then pushing it off as opinion.

“Freedom of speech should be without fear,” he said.

As Professor Boudreau pointed out in his introduction, speakers like Jones are brought to speak with his classes because he wants them to challenge his students, to test their perception of the limits of free speech. Members of The Westboro Baptist Church illustrated a more extreme example of this, and remnants of their controversial appearance last year were echoed by the heavy police presence.

Terry Jones drew nowhere near the controversy that the “God Hates Dead Soldiers” picketers did, though. In fact, the police presence combined with the over-sized auditorium dwarfed Jones’ message significantly. His voice echoed through a chamber that seemed empty, which is fitting because many of his answers were as well.

When I asked Jones what his definition of Shariah Law—the doctrine he claims that American Muslims are secretly trying to enforce on the country—was, he claimed it was “not important” to the discussion. He then diverted as he often did throughout the speech, by claiming that the Constitution was the supreme law of the land.

Shariah Law is the Islamic definition of “God’s Law,” and varies in meaning depending on the sect of Islam, which is comparable to the varying interpretations of the Bible in Christianity. Jones was adamant about distancing the Bible from any sort of “extremist” interpretation like those he finds in the Quran (which he has not read all the way through).

Despite his goal of avoiding extremism, he and a group of like-minded individuals put the Quran on trial last March before they found it “guilty” and burned it. He told the lecture hall that he had served as judge in the case when asked by Boudreau.

Moments like these reveal the absurdity in his message even if his mild demeanor dulls its bluntness somewhat. As a recently announced presidential nominee (though he admitted he does not think he would win), Jones embodies xenophobic extremism to such an extent that most of his declared foreign policy hinges on keeping others out.

“Unlike most politicians, I’m honest,” he said.

In the end, though, his honesty extends only to what he is willing to admit. Under the guise of pure opinion, he advocates free speech and then offers up an initiative where mosques are monitored. Contradictions like that motivate Jones to preemptively lash out at press bias.

“The press’ job is not to tell us what to think,” Jones said.

That being said, the backlash about Jones speaking at CMU on several postings beforehand was misguided.   For one thing, it is not as if an invitation was extended to him by Dr. Boudreau to gain insight on his world view. He was deliberately brought here as a catalyst for discussion; his function was as no more than a real-life illustration of the limits of free speech.

“Take a trip to the outer limits of the First Amendment,” Boudreau said in his introduction.

By putting the Quran on trial, burning it and then finally failing to realize a justification for his actions, Terry Jones illustrates an ill-formed, bitter opinion to the fullest extent. Say what you will about the members of The Westboro Baptist Church, but they are armed with specific examples of why they believe what they believe.  However reprehensible, they can defend it.

Jones’ intolerance appears born out of a dislike of the unknown. According to the dogma-based database Religious Tolerance, there are roughly seven million Muslims in the United States at the very most. That is less than one percent of the total population (just over 300 million as of the last census), yet Terry Jones would have anyone who will listen believe that Shariah Law is being imposed en masse.

Not only is that ideal absurd statistically, it is a complete illustration of the scope of his intolerance. Fear occurs when what we think changes reality, and Terry Jones’ reality is a very angry fear. However unaware he may be of his position, this presidential candidate does indeed stretch the limits of the First Amendment.

Seeing him firsthand, it’s hard to take anything he says seriously, but not because it’s wildly out of touch with the reality of the statistics. He simply hasn’t taken the time to research his intolerance, and seems predictably unable to grasp what he is saying as hateful. Paraphrasing an article by Gary Mulder in “Banner”: this is a fish that doesn’t know it swims in water.