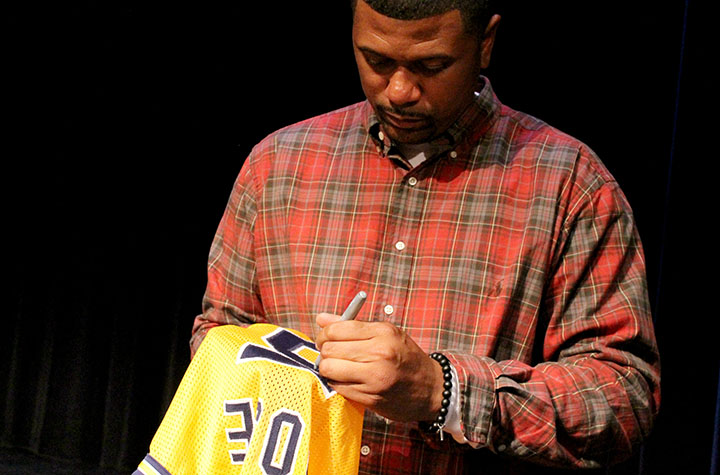 If you attended the Jalen Rose speech and Q&A session on Tuesday, Sept. 24 at Plachta Auditorium, you didn’t leave disappointed.

Rose opens his podcast “The Jalen Rose Report” singing the song “Give the People What They Want” and on Tuesday, that’s exactly what he did. He spoke to and interacted with the audience for close to two hours, willing to stay much longer then he was required to. But Rose’s generosity doesn’t end there.

After speaking for the better part of two hours, Rose signed posters, jerseys and hats, and took pictures with fans and Central Michigan staff for more than a half hour, before retreating to his dressing room. It was there that Grand Central was able to ask a pair of questions to the former Michigan Wolverine and Indiana Pacer.

The first question centered on the transition from professional athlete to professional broadcaster, and the second was about his former Hall of Fame teammate Reggie Miller.

Rose said being an analyst for ESPN, ABC, and Grantland.com is far more difficult than anything he had to do as a professional athlete.

“It’s more difficult being an analyst than a player because being a player is physical,” Rose said. “So a lot of those things are learned behaviors and muscle repetition. So practice shooting jumpers and getting in the gym, on the track and in the weight room, doing drills between the legs, behind the back, post moves and all of that, that’s physical. But then you still have to play the game mentally in order to be successful.

“But doing this multimedia space, it’s totally different because it’s not physical at all. You know, it’s how you attack the topic with your mind and your information; constantly finding out what’s current, finding out who’s hot, who’s not. Everything about a person, what makes them tick, what are their strengths? What are their weaknesses? All of those things you have to know at the drop of a dime.”

While Rose has garnered fame because of what he did on the court and from what he does on the set of pregame shows, his storytelling abilities have also made waves in a Grantland series called “Story Time with Jalen Rose.” Although he didn’t have a stealing Patrick Ewing‘s TV or the Vince Carter body slam-type story about his former running mate Reggie Miller, he did speak to No. 31’s superstitious nature.

“I loved playing with Reggie because he’s real competitive, he really wanted to win. He was one of the best shooting guards of all-time, a Hall of Fame player, I learned a lot from him. Some of my best stories, (are based on) that he’s superstitious,” Rose said. “He’s one of those people that would tie his shoe a certain way, wear a shirt a certain way, do a certain dance before a game.

“There was a period, when I first got to Indiana, he was doing the leg kick and the Michael Jackson before games. You know, he was a guy that kept the mood light, even though it could be a Game 7 and it meant everything.”

When Rose isn’t covering the NBA or recording his podcast with Grantland’s David Jacoby, the Detroit native gives back to his community. In 2011, Rose opened the Jalen Rose Leadership Academy, a public charter high school in Detroit. The academy has served over 200 9th and 10th graders who commute from all around the Detroit area. The academy also plans to accommodate 11th and 12th graders for the 2013-2014 school year.

The JRLA operates under The Governor John Engler Center for Charter Schools at Central Michigan University and Rose said he is pleased with the partnership.

“CMU is a fantastic school with a very high standard that is well-respected all over the state,” Rose said. “It has entrenched itself as a leader in this state for education. We are very happy with our partnership.”

“CMU is a fantastic school with a very high standard that is well-respected all over the state,” Rose said. “It has entrenched itself as a leader in this state for education. We are very happy with our partnership.” – See more at: http://www.cm-life.com/2013/09/25/michigan-basketball-legend-jalen-rose-speaks-to-crowd-of-nearly-1000-at-plachta-auditorium/#sthash.XC4Nb9hd.dpuf

For more on Jalen Rose, checkout the Jalen Rose Leadership Academy website and his podcast with David Jacoby on Grantland.com.