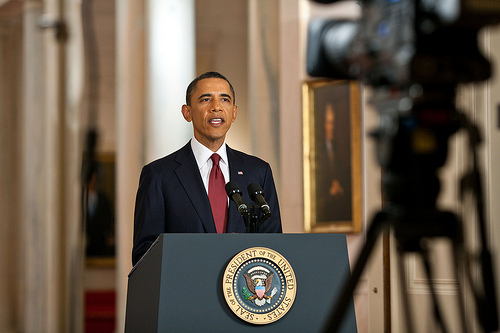 The shots were fired silently before the American public even knew what happened.  Late on Sunday evening, they rang out around the world.  News outlets interrupted extended coverage of The Royal Wedding’s aftermath and the latest elimination on “The Celebrity Apprentice” for this:  Osama bin Laden, the mastermind of the Sept. 11 terrorist attacks, was killed.

These words reverberated through America’s psyche with equal waves of shock and excitement.  This was it.  That man, the one who had evaded us for so long (3,519 days, but who’s counting?) and who had caused so much death and spread so much hatred, was dead.  Killed, in fact, by members of our military.

Osama bin Laden’s death may not mark the end of an era, but it is a milestone.  Our security at airports will be forever heightened, our wars in the Middle East may rage on for many more months and even years, but we have this.

The local reaction at CMU mirrors the larger one in the nation.  Students clicked onto Facebook and Twitter, and then many of them tuned into one of the countless news stations covering it.  Some lit off fireworks while others chanted patriotic hymns out their windows instead of participating in the “Midnight Scream.”

Studying for exams became secondary to finding out what had happened to this terrorist that the world had hunted for so long.  People working in labs late at night spread the news through tweets while simultaneously informing their neighbors.

“Everyone around me quit studying and went straight to CNN.com and the White House’s website,” Kaity Jerolamon, a CMU junior who was in the Woldt computer lab when the news hit, said.

As social media fueled the wildfire, the news carried over into the next day, when people continued to analyze the events surrounding Public Enemy Number One’s death.   We found out that a group of NAVY Seals raided a compound in the Pakistani village of Abbottabad, and found bin Laden holed up in somewhat comfort, unlike the claustrophobic bunker of Saddam Hussein.

He wasn’t lurking in the mountains, he was hiding in the suburbs, to paraphrase “The Daily Show.”

Commentators and citizens may have their jokes to tell, but they’re all also relentlessly pondering the same question: “What does it mean?”

“The future relations between the U.S. and the Middle East will likely depend on the steps the U.S. takes to address some of the core problems underlying terrorism in the region, such as the lack of economic opportunities and human rights abuses,” Mihaiela Gugiu, a Political Science professor at CMU who teaches World Politics, said.

Bin Laden’s death weaves an interesting narrative thread into the democratization movement currently spreading through Middle Eastern countries like Egypt and Libya.  Will the death of Al-Qaeda’s most prominent leader be an even bigger catalyst in the region?

According to Gugiu, bin Laden’s death and these democracy protests “may signal a turning point in the U.S. relations with the Middle East.”

One of the big connectors in this country and at this university is the speculation, not just from academics, but from concerned students as well.

“The government cannot become complacent and pretend that there is no longer a threat,” Nathan Inks, Chairman of CMU’s College Republicans, said, “and I trust the current administration as well as future administrations will continue the fight against terrorism.”

Speculation like this, and trust like this, is all any of us can do.  It’s what happens after historical events.  That sense of “What next?” quietly begins to replace the initial celebration.   The bloody story of the attacks of Sept. 11 began with plane crashes and infinite screams of terror.  It ended in the Spring of 2011 with a single helicopter landing and a tyrant’s solitary dying breath.