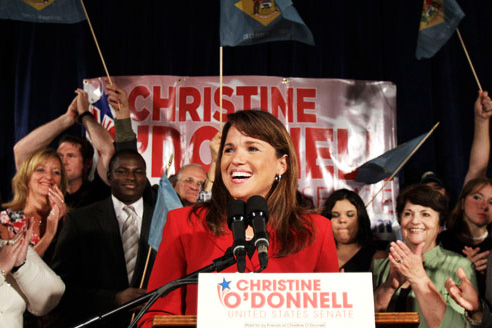 The Tea Party movement started out as a small grass-roots movement, but over the past year and a half it has turned into something else entirely.

So, that begs the question, is the Tea Party a new political party or just a sect of pissed off Republicans?

This question becomes all more important as we are approaching the 2010 midterm elections. Tea Party candidates have beaten several established Republicans in the race for nomination.

Christine O’Donnell from Delaware is the best example of this. She beat out established Republican Mike Castle, who was more of a moderate Republican. O’Donnell lacked the support of the Republican party as a whole, but she won anyway, some say based on a large part from an endorsement from Sarah Palin.

This same situation is being played out across the country: Extreme right-wing candidates are wining Republican nominations over more moderate Republicans.

Many Republicans have said that this Tea Party movement could hurt the Republican party’s chances in sweeping the midterm Senate seats. Republican leaders feel like having such right-wing candidates will push more moderate Republicans away, and I must say that I agree.

Although the Tea Party movement may gain some radical support from angry, unemployed, revolutionary Obama-haters; it is not the kind of support that the Republican Party needs. It is common knowledge that a more moderate candidate is almost always the safe bet for a nomination, because they appeal more to the moderate Democrats or those voters out there without party affiliation.
In my opinion, the outcome of the 2010 midterms may be the determining factor in the future of the Tea Part Movement.