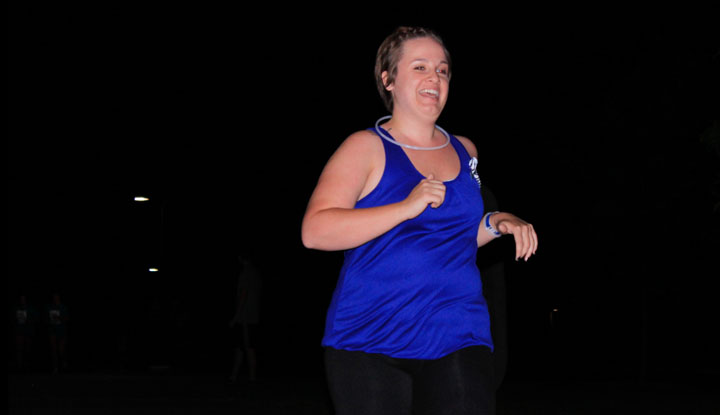 Students walk by them every day, but not many are aware of the emergency blue light phones on campus.

There are currently 26 emergency blue light phones spread across campus that consist of a yellow phone box with an emergency button that contacts the police when pressed. A blue light glows above the phone boxes to make pedestrians aware of its location.

Sophomore Alli Adams helped organized the Blue Light Fun Run this year. Adams said the main purpose for the run was to raise awareness about where the blue lights are located.

“So many people on campus don’t know where they are at,” Adams said.

Adams believes that the blue lights are important to have on campus because they make students feel safer.

“This is your home. Everyone should feel safe at home,” Adams said. “Nothing is unnecessary on campus to make people feel safe.”

The run was organized not only to raise awareness of the blue lights, but to raise funds for the Sexual Aggression Peer Advocate group on campus. All of the money raised at the event went to SAPA.

Madeline Price, a sophomore and member of SAPA, participated in the run to help raise awareness and promote the organization. Price said she was happy to donate because she wanted to “get more sexual aggression services for students.”

Some raise the question of the blue light’s relevancy. In an era where everyone has a cell phone, people question if emergency blue lights are still necessary.

Central Michigan Police Officer Jeffrey Ballard addressed the question at the end of the run.

“In this day and age, do we all have cell phones?” Ballard said.  “Do they always work?”

Sophomore Bailey Pickles participated in the run for the first time and said the emergency phones send police a notice of the location of the emergency.

“Some phones don’t have a tracking ability,” Pickles said.

The Blue Light Fun Run took 54 runners to 16 of the 26 blue light emergency phones on campus.  The course was estimated to be about 1.67 miles long. The run raised a total of $720 for SAPA.

For more information on the locations of the blue lights on campus, visit the Central Michigan University Police website.