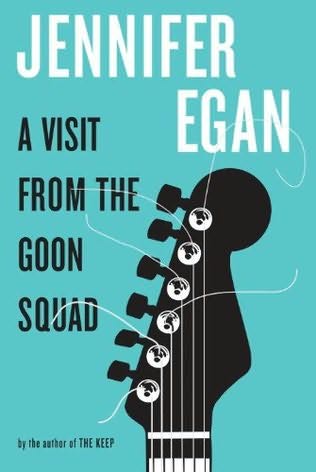 A Visit from the Goon Squad is not a standard novel. If your interest in reading fiction requires a normal beginning-middle-end plot, then this is not your book. If you are looking for a romantic ending where every character finds peace and resolve – I suggest you go to the library and pick up something written by Jane Austen. However, if you seek modern characters with real problems and are interested in an experimentally formatted book, than A Visit from the Good Squad by Jennifer Egan is for you.

Before I get critical, I must tell you that this book won the Pulitzer this year so it is above all else, a good book. The summary on the back cover gives you a very brief introduction to two characters in the book, Bennie and Sasha, whose stories are told in the first chapters.

What the summary doesn’t tell you is that these are not the only two main characters. Each chapter revolves around a new person who is somehow related to the first two, think a literary Love Actually. Unlike Love Actually, Goon Squad takes place throughout decades and across the world and ends sometime in the future. Egan writes this complicated story so intricately, that she will barely mention a character, and then, three chapters later – he may be married to another character and have his own story.

This is the format of the book; Goon Squad is a collection of interrelated stories rather than a typical novel. Each story is connected by the characters, common themes of loss, innocence and overcoming personal struggles – like addiction, or suicide.

What makes this book so enjoyable is not limited the connections between the characters, but it is the characters themselves. Not one is perfect; few are good, or even decently moral. There are drugs in almost every chapter, prostitution in a few and debauchery throughout. Egan takes Sasha from a kleptomaniac, back into her trouble teenager years in Italy, to a struggling but content wife and mother.

Another character, while under the influence of several lines of cocaine, performs oral sex in a night club on a much older man. In a later chapter she confronts the same man who is now confined to a hospital bed about how he stole her innocence. Each of the characters finds a similar ending to Sasha. The conclusion of every character is not happy, this is no fairytale, but they do often find a sense of harmony where their life is put into perspective and they are at least comforted by this.

Don’t be fooled, there is no such thing as a perfect book, besides The Prisoner of Azkaban, therefore I must end this review with a little criticism. I typically enjoy a standard structured book. Egan’s characters were beautifully troubled and there were no unrealistic happy endings, but I wish the reader would have been made more aware of the structure before picking up the book.