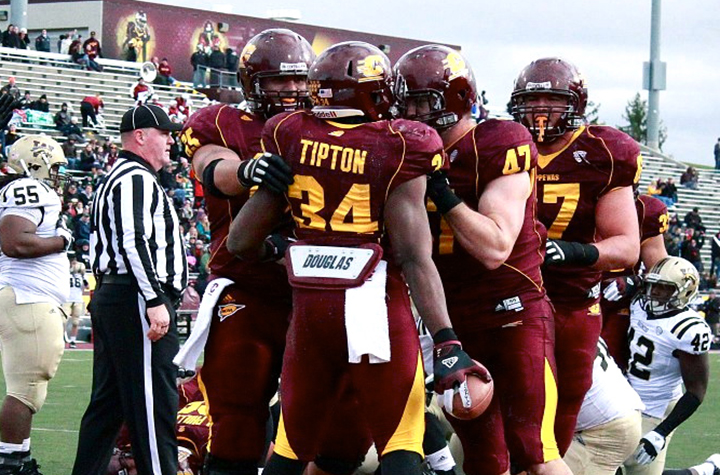 Central Michigan heads into its game against Western Michigan today, with a two-game losing streak on the season, and has lost the past two meetings in the Battle for the Cannon with the Broncos.

At a combined 4-15 on the year, it’s safe to say the season has been a major disappointment for Western (1-9) and Central. For the third consecutive season under Dan Enos, Central Michigan finds themselves stuck at 3-6 with its back against the wall.

Central’s schedule is once again set up for them to finish at 6-6. After Western Michigan, the Chippewas have two home games in a row against Massachusetts (1-8) and Eastern Michigan (2-8). The Warriors are suffering through one of the worst seasons in program history, but they should not be overlooked by the Chippewas.

Two of Central Michigan’s wins this season were against a winless Miami (Ohio) team and FCS New Hampshire, with one quality win against Ohio on Oct. 12, 26-23.  The offense has been extremely inconsistent and the defense had a tough time keeping up with teams with any sort of balanced attack.

Luckily for the Chippewas, the Broncos’ offense has struggled to find an identity all season long. Freshman wide receiver Corey Davis, brother of Central Michigan wide receiver Titus Davis, has been Western’s only consistent weapon throughout the season. With six touchdowns on 61 receptions with 873 yards, Corey Davis has had five games with over 100 yards receiving.

Western Michigan has been unable to find another viable option in the passing game. Outside of Corey Davis, no other player has over 19 receptions.

Senior Tyler Van Tubbergen started the season as the Broncos’ starting quarterback but a shoulder injury opened the door for freshman Zach Terrell to take over under center. Terrell has shown flashes in his short time as the starter, including Western Michigan’s only win against UMass in which Terrell threw for four touchdowns, no interceptions and 275 yards.

Getting pressure and forcing Terrell out of his comfort zone will be a must for the Central Michigan defense. He has been prone to throwing interceptions when the defense can get in the backfield. Take away the game against UMass and Terrell has thrown seven interceptions to just three touchdowns.

Dareyon Chance and Brian Fields are in a timeshare when it comes to the Broncos’ rushing attack. Both Chance and Fields have over 500 yards and 120 carries. While Fields has been the scoring threat with five touchdowns to Chance’s one.

For Central Michigan to win this game, they will need to stop Chance and Fields from running the ball effectively. While Terrell has shown some major signs of progression in recent weeks, putting the game in his hands is as ideal of a situation as the Chippewas could write up.

Things begin to get a little more complicated on the offensive side of the ball for Central Michigan. Freshman quarterback Cooper Rush continues to have an up and down season, but that is to be expected with someone who was unexpectedly thrown into the fire as he was. He has thrown an interception in all seven  games as the starting quarterback. As with Western Michigan, the less pressure you put on your freshman quarterback the better.

Through nine games, Rush has thrown for 12 touchdowns with 1,859 yards and 11 interceptions.

A familiar face joined Rush in the backfield against Ball State on Nov. 6, as Zurlon Tipton made his return form a broken ankle he suffered in the first game of the season against Michigan on Aug. 31. Tipton carried the ball five times for eight yards and recorded his 27th career rushing touchdown as a Chippewa—moving into seventh place all-time.

The duo of Saylor Lavallii and Tipton should take a lot of pressure off of the passing game—if Central Michigan can keep games within reach. Lavallii ran for five touchdowns on 774 yards while filling in for Tipton. The only question will be how to distribute the carries between the two, and possibly freshman Maurice Shoemaker-Gilmore who has received over 10 carries in three of the last four games.

It’s a problem that Enos will welcome with open arms as Central Michigan tries to win in Kalamazoo, Mich. for the first time since 2009.