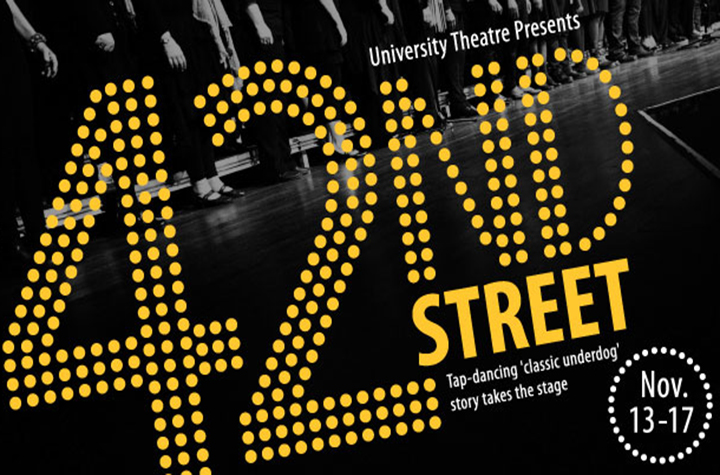 If you are looking for something uplifting and funny, then 42nd Street is for you.

Thursday night I had the pleasure of viewing 42nd Street directed by Annette Thornton, with musical direction by LaToya Lain at Bush Theatre. The musical had beautiful props, humorous dialogue and wonderful dances. I have only one, tiny complaint.

42nd Street is about a young girl, Peggy Sawyer, moving to New York from Allentown, Penn. Her hope is to become a Broadway star even though the odds are against her. She joins an up-and-coming dance company and becomes a part of the chorus dancers. As the play reaches climax, the audience does not know if Peggy will continue to be a part of the show or if she will be gone for good due to an accident with the company’s leading lady.

I won’t spoil the ending for you, but, I promise it is a good one.

The props for this musical were outstanding, and the prop crew did a phenomenal job on making them dynamic and useful. My personal favorite was the bunk bed cubbies that the girls got to do one of their numbers in. I thought it was original and well-used. The props appeared to float around that stage during this show, which was very impressive.

The Dialogue between the songs was hysterical. The actors made jokes at each other and turned each situation into a laugh. The songs even had lines that were making people snort.

I could spend hours raving about the tap dancing skills the actors had. With one of the largest casts to date, they pulled off dancing skills that some dance companies have a hard time doing. The group was in sync, enthusiastic and nobody seemed out of breath.

My only complaint is that there were times during the musical that the orchestra was louder than the actors’ microphones and I could not hear the words of songs well. See? Tiny complaint.

If you are looking for great talent, dedicated actors and innovation in the theatre, then I greatly suggest seeing this musical. But be warned! The musical is known to sell out each night, so be sure to get your tickets beforehand and arrive early to buy them from the box office.