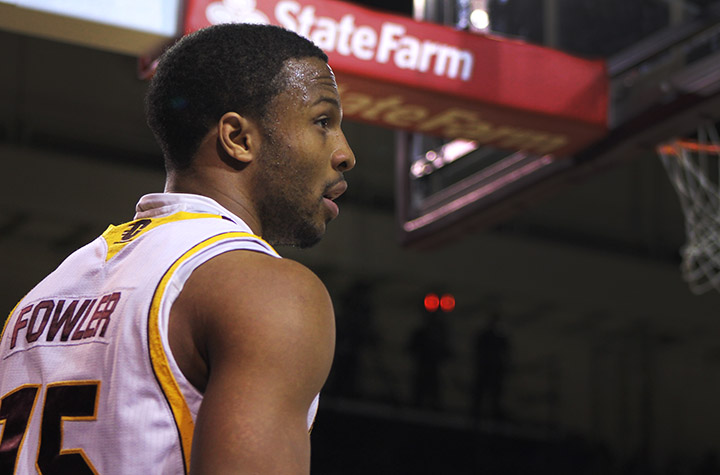 Central Michigan’s record (10-19, 3-14) is evidence of the team’s struggles this season but doesn’t illustrate how much the team has improved over the last several weeks.

Toledo (25-5, 13-4) defeated Central 73-69 on Tuesday, March 4 at McGuirk Arena. Despite the Chippewas shooting at least 50 percent from the field in each half, the Rockets who lead in the West Division of the MAC, got the win.

“We haven’t always found a way to win the games, but we found a way to be able to compete and play in those games and that’s attributed to the character of the student athletes we have,” Coach Keno Davis said.

With one more home game left, Central Michigan will then enter the “March Madness” of the MAC tournament. Despite the team’s record, Davis said he wouldn’t count his team out.

Since the beginning of the season, sophomore guard Chris Fowler said he has seen improvement in the team’s game as well as his own game.

“We made individual strides,” Fowler said. “We’re learning how to play harder for a longer period of time. There’s no giving up for this team. We’ll just keep getting better and fight to the end.”

Though it’s been a rough season when Central has faced teams with multiple upperclassmen, Davis said he has seen improvement throughout the year in several aspects of Central’s game. For example, Central only shot five for 30 from the mid-range against Eastern Michigan on Feb. 26 compared to shooting 22-for-30 from inside the arc against Toledo.

When Central played Buffalo and Northern Illinois, Davis said the Chippewas lost because they lost the battle on the boards in each contest. In Tuesday’s game, Central had 29 rebounds compared to Toledo’s 26.

“We’re showing some glimpses of what we could be in one area and the other area we’re not quite there,” Davis said. “We need the experience. We need to obviously add a couple of players to the mix. We’re a team that’s not that far away. How close are we to competing for a championship? I don’t know, but we’re a lot closer than people might think.”

Though the losses can get frustrating as they pile up, Fowler said he and his teammates haven’t forgotten to have fun when stepping onto the court.

Another aspect that makes the game fun the continued support from students and residents from the Mount Pleasant community. The support doesn’t go unnoticed by the players.

Sophomore guard Austin Stewart said a message he has for the team’s fan base is to stick with the team. Despite what the record may look like or how many points the team may lose by in a single game.

“Stick with us because we promise we’re playing for them and we’ve got more in store,” Stewart said.

Central Michigan will play its final home game of the season tonight, Friday, March 7 at McGuirk Arena. The game tips off at 7 p.m.